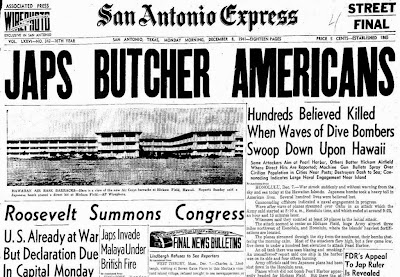 Americans tend to brutally and concretely remember the "Pearl Harbor Attack." I find great affection for the Japanese today, but my mother (born in 1927) grew up hating them. This generational split about "December 7th" is disappearing, and we can now speak to the fact that the location is mystical. There is another side of Pearl Harbor. I'm not talking about the many myths associated with the actual 1941 military action (see here). It was a place of legends before 1941, and has developed its own new tales since then.


Legends of ancient Hawaii tell of waters called Puuloa, which was the home of the beneficent Shark Goddess Kaahupahau. Her sharks were man's protectors against many evil spirits and also against the other "man-eating sharks."
The legends, when first recorded in the 19th Century, refer to Ewa as the first area populated on Oahu by the immigrant Polynesians. One Ewa king, Chief Keaunui, is credited with deepening the entrance of the harbour to 15 feet in about the year 1650. During those years and into the 20th Century numerous fish ponds and fish traps were in the entrance and in the many lochs of that body of water. Most were maintained for royal use only.
As early as 1796 European visitors recorded that those waters produced oysters which were used for food, and that pearls were frequently found in them. The pearls were milk white, spherical, and of exquisite lustre. By 1810 the king had found the trading value of the pearls and kept them under royal control.
In the same year (1810), the river leading into the bay was referred to as Wymumme, and in 1819 as Wy Momi which, translated to English, is Pearl River. (The difference in spelling is that of the person recording the spoken word.) Again in 1836 it was recorded that the small pearl oyster was quite abundant and common on the table. From about that time on, the large area of water at the mouth of the river was called Pearl Harbour.
For generations the land surrounding Pearl Harbour was subject to natural erosion and the attrition of "civilization" which allowed much of the harbour to be filled with mud. The oysters could not survive in the mud and were nearly extinct by the late 19th Century.
A visitor from the United States noted in 1840 that there was a depth of 15 feet over the coral bar at the harbour entrance. He suggested to the U.S. Government that they attempt an agreement with the Hawaiian king for the use of the harbour for U.S. ships. This was not acted upon until 1873 and not agreed until 1898. Then the actual work of deepening and widening the channel wasn't started until 1901, at which time a coaling station for the fuelling of ships was erected just inside the entrance. Source.


Pearl Harbor was originally an extensive deep embayment called Wai Nomi (meaning, “pearl water”) or Puʻuloa (meaning, “long hill”) by the Hawaiians. Puʻuloa was regarded as the neighbor of the dolphin god, Kaʻahupahau, and his brother (or father), Kahiʻuka, in Hawaiian legends. According to tradition, Keaunui, the head of the powerful Ewu chiefs, is credited with cutting a navigable channel near the present Puʻuloa saltworks, by which he made the estuary, known as "Pearl Lake," accessible to navigation. Making due allowance for legendary amplification, the estuary already had an outlet for its waters where the present gap is; but Keaunui is typically given the credit for widening and deepening it. Source.

The Church of Jesus Christ of Latter-day Saints have a story in their mythos that a Japanese bomber refused to bomb the Laie Hawaii Temple during the bombing of Pearl Harbor.

The temporal importance of Pearl Harbor Day was reinforced immediately, and lives on today. 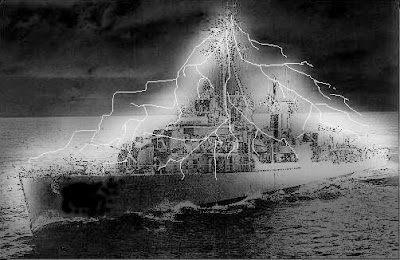 What special synchromysticism do you associate with Pearl Harbor?

"Look with horror in your mirror at the eyes without curiosity;
at the lips which never question."
~ Tiffany Thayer, in his Introduction to Charles Fort's Lo!
Posted by Loren Coleman at 9:15 AM

I can't associate Pearl Harbor with anything but my grandfather, who was a 17-year-old hospital corpsman when he was blown off the U.S.S. West Virginia - knocked unconscious, but rescued from the water - on Dec. 7, 1941. He passed away almost 20 years ago, but I remember him saying that one could hear sailors trapped inside the wreck of the Arizona, banging desperately on the inside of the ship's hull with no hope of rescue, at Christmas almost three weeks later. I don't know if that's true or if he only imagined it, but he became a world expert on air disaster rescue because trying to save lives was all he knew to do to live with the horror.

GOD BLESS your grandfather and I am forever grateful for his service. My wife’s Uncle’s Bomber was shot down twice the second time he was capture and endured hell on a forced march. He did not talk about it until 60 years later when a local paper asked him to recount his story.