Death in the Pope's Family 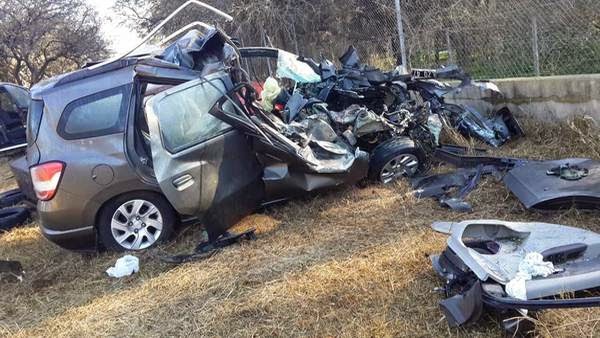 Tragedy struck in Argentina today. Deaths continue away from the limelight of Ferguson, Gaza, and Tiburon.

A car crash in Argentina killed three members of Pope Francis' family on Tuesday, August 19, 2014, at about 12:30 a.m. A truck struck the car the nephew was driving on a highway in Córdoba.

The Argentinian newspaper El Clarín says the accident occurred near the town of James Craik, in Córdoba. Córdoba was founded in 1613 by the Jesuit Order. Because of this, Córdoba earned the nickname La Docta (roughly translated, "The Learned one").

Police say two of the Pope's grand-nephews and the boys' mother died in the crash that left the pontiff's nephew, Emanuel Horacio Bergoglio, 38, in critical condition. The Bergoglio's Chevrolet is shown above.

Pope Francis, the former Jorge Mario Bergoglio, served the Roman Catholic Church in Argentina for 43 years, including 15 years as archbishop of Buenos Aires. He succeeded Pope Benedict XVI as leader of the church in March 2013.

The town of James Craik, intriguingly, was named after James Craik, an Englishman.
Su nombre se debe a James Craik, empresario inglés, que en 1881 ocupó la gerencia del Ferrocarril Central Argentino.En realidad su nombre primitivo era "Chañares" y por una costumbre de uso al denominarse la estación de ferrocarril James Craik fue generando la costumbre de llamarla así. So the Wikipedia page the name of the town refers to an English businessman, James Craik, who in 1881 was the manager of the Central Argentine Railway. The former name of the town was 'Chañares', but because the railway station was named after James Craik, the whole town was eventually known with that name.
A h/t to Red Pill Junkie for some curious questions about this news.

Posted by Loren Coleman at 7:40 PM

People of the "Two Suns"

Notice on the wiki page link below, where it says "The sacrificial victim offered by Jupiter's priest, a female lamb (agna) may be evidence if not of Venus herself, then of an ancient, rustic Latin goddess very like her."

Nothing is new under the sun, still in Rome.

Can almost see these things coming up: