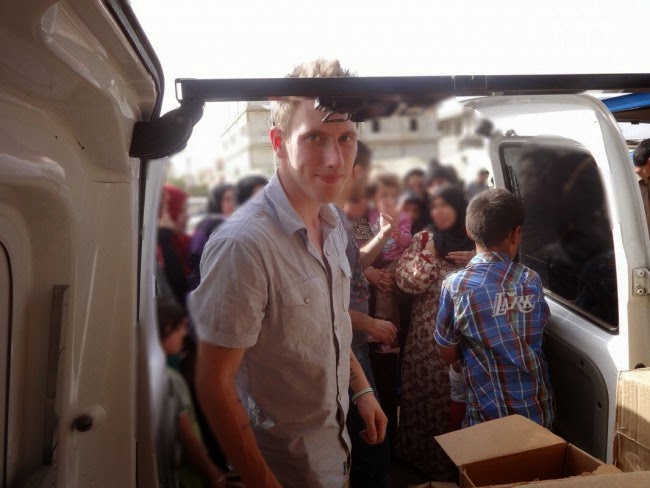 CNN is reporting that, "in a video published to the Internet on Sunday [November 16, 2014], purportedly from terror group ISIS, militants claim to have beheaded American hostage Peter [Edward] Kassig."


According to a TIME article from January 2013, Kassig was running an NGO out of Beirut, Lebanon, after returning there (originally on spring break from Butler University in ). Called SERA, it stands for Special Emergency Response and Assistance, and delivers food and aid to those in Syrian refugee camps.
...
Kassig [was] an Army Ranger who deployed to Iraq in 2007. He joined the Army Rangers in 2006, and was honorably discharged for medical reasons after a brief tour. In an interview with Syria Deeply, Kassig said that he rejected the chance to train rebels in military tactics. Source.

Kassig, 26. changed his first name to Abdul Rahman after becoming a Muslim while in captivity.

The meaning of Abdul literally and normally means "Slave of the," but English translations also often translate it to: "Servant of the."

Rahman (Arabic: رحمان‎, Raḥmān) is an Arabic male name. It is the elative of Raḥim, based on the triconsonantal root R-Ḥ-M. In Islam, the name ar-Raḥmān, meaning "The Beneficent, The Most Merciful in Essence, The Compassionate, The Most Gracious" is considered most special of the Names of God in Islam. Rahman can be short for Abdur Rahman "servant of al-Rahman"; i.e. "servant of God". With nisba, the name becomes Rahmani and is used as a surname.

Kassig/Rahman is the 5th Westerners to be beheaded in this current cycle of ISIS murders.

On November 16, 1272, while travelling during the Ninth Crusade, Prince Edward becomes King of England upon Henry III of England's death, but he will not return to England for nearly two years to assume the throne.
Posted by Loren Coleman at 5:20 AM

Abdul means 'servant to' while he also attended BUTLER Uni.

Tomorrow Nov 18th is the 322 day of the year. Waiting on the Ferguson Grand Jury to make a decision. Tomorrow seems a good a day as any. Particularly if you are a Skull and Bonesman.