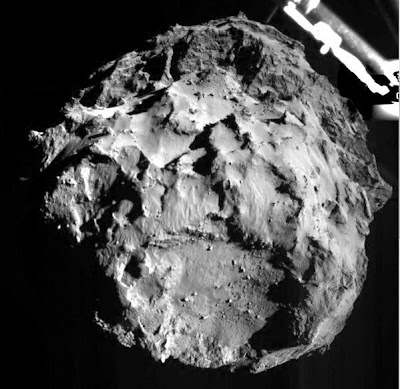 Image of comet taken from Philae spacecraft before successful landing.


Philae means "trade." There is an intriguing name game behind all the interstellar news you are seeing on television and reading about in the media. Let me save you the trouble, and go through these language links systematically. Today's news merely continues the space happenings occurring as Interstellar plays in your neighborhood theater this month.


Philae is a robotic European Space Agency lander that accompanied the Rosetta spacecraft until its designed landing on comet 67P/Churyumov–Gerasimenko, over ten years after departing Earth. On 12 November 2014, the lander achieved the first controlled touchdown on a comet nucleus. Its instruments are expected to obtain the first images from a comet's surface and make the first in situ analysis to determine its composition.
The lander is named after Philae Island in the Nile where an obelisk was found and used, along with the Rosetta Stone, to decipher Egyptian hieroglyphics. Source.

Obelisks are important, in terms of twilight language. See some of what I've already written about them, here, here, and here. 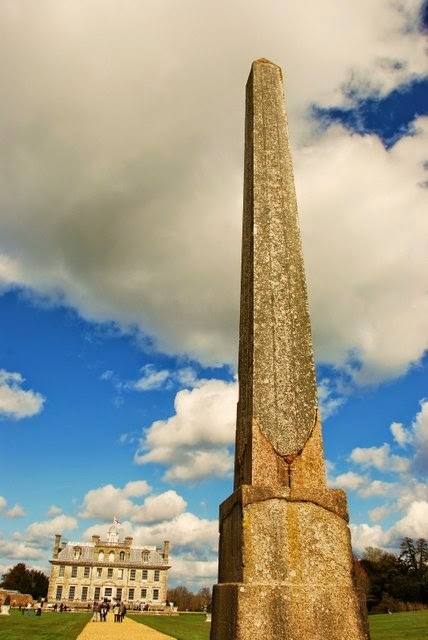 The Philae obelisk [pictured above] was one of two obelisks found at Philae in Upper Egypt in 1815 and soon afterwards acquired by William John Bankes. He noted two inscriptions on it, one in Egyptian hieroglyphs the other in ancient Greek. By comparing the two texts, although they were not translations of one another, Bankes believed that he recognised the names Ptolemy and Cleopatra in hieroglyphic characters: his identification was afterwards confirmed by Thomas Young and Jean-François Champollion, and assisted Champollion in his eventual decipherment of Egyptian hieroglyphs. The inscriptions record a petition by the Egyptian priests at Philae and the favourable response by Ptolemy VIII Euergetes and queens Cleopatra II and III; the documents are dated 118/117 BC.
During the 1820s Bankes acquired the obelisk found at Philae and had it transported to his estate at Kingston Lacy in Dorset, England. The operation was carried out by the noted adventurer Giovanni Belzoni. The house now belongs to the National Trust and the obelisk can still be seen in the gardens. Source.

All the proper names could be analyzed in this event. Let's look at just one: Giovanni Belzoni.

Giovanni (which means "God Is Gracious") Battista (derives from John the Baptist, to bathe) Belzoni is sometimes known as The Great Belzoni. He was an intriguing character, a giant of a man (6 feet 7 inches) for his time, a traveling circus performer, who became a prolific Italian explorer and pioneer archaeologist of Egyptian antiquities. In 1823 he set out for West Africa, intending to travel to Timbuktu. Having been refused permission to pass through Morocco, he took the Guinea Coast route. He reached the Kingdom of Benin, but allegedly was seized with dysentery at a village called Gwato, and died there, at the age of 45. According to the noted traveller Captain Sir Richard Francis Burton, Belzoni was murdered and robbed. Source.


“I like you, Lloyd. I always liked you. You were always the best of them. Best goddamned bartender from Timbuktu to Portland, Maine. Or Portland, Oregon, for that matter.” – Jack Torrance in The Shining (1980). Read more.

What of the source of the name Philae and its direct link to Isis, the Egyptian deity, which is mirrored in the name of the modern Mideastern organization, known for its terror, beheadings, and more?


Philae, being accounted one of the burying-places of Osiris, was held in high reverence both by the Egyptians to the north and the Nubians (often referred to as Ethiopians in Greek) to the south. It was deemed profane for any but priests to dwell there and was accordingly sequestered and denominated "the Unapproachable" (Ancient Greek: ἄβατος). It was reported too that neither birds flew over it nor fish approached its shores. These indeed were the traditions of a remote period; since in the time of the Ptolemies of Egypt, Philae was so much resorted to, partly by pilgrims to the tomb of Osiris, partly by persons on secular errands, that the priests petitioned Ptolemy Physcon (170-117 BC) to prohibit public functionaries at least from coming there and living at their expense. In the 19th century AD, William John Bankes took the Philae obelisk on which this petition was engraved to England. When its Egyptian hieroglyphs were compared with those of the Rosetta stone, it threw great light upon the Egyptian consonantal alphabet.
Philae also was remarkable for the singular effects of light and shade resulting from its position near the Tropic of Cancer. As the sun approached its northern limit the shadows from the projecting cornices and moldings of the temples sink lower and lower down the plain surfaces of the walls, until, the sun having reached its highest altitude, the vertical walls are overspread with dark shadows, forming a striking contrast with the fierce light which illuminates all surrounding objects. Source.


The most conspicuous feature of both islands was their architectural wealth. Monuments of various eras, extending from the Pharaohs to the Caesars, occupy nearly their whole area. The principal structures, however, lay at the south end of the smaller island.
The most ancient were the remains of a temple for Isis built in the reign of Nectanebo I during 380-362 BC, was approached from the river through a double colonnade. Nekhtnebef is his nomen and he became the founding pharaoh of the thirtieth and last dynasty of native rulers when he deposed and killed Nefaarud II. Isis was the goddess to whom the initial buildings were dedicated. See Gerhart Haeny's 'A Short Architectural History of Philae' (BIFAO 1985) and numerous other articles which incontrovertibly identify Isis (not Hathor) as the primary goddess of the sacred isle.
…
In front of the propyla were two colossal lions in granite, behind which stood a pair of obelisks, each 43 ft (13 meters) high. The propyla were pyramidal in form and colossal in dimensions. One stood between the dromos and pronaos, another between the pronaos and the portico, while a smaller one led into the sekos or adytum. At each corner of the adytum stood a monolithic shrine, the cage of a sacred hawk. Of these shrines one is now in the Louvre, the other in the Museum at Florence. Source. 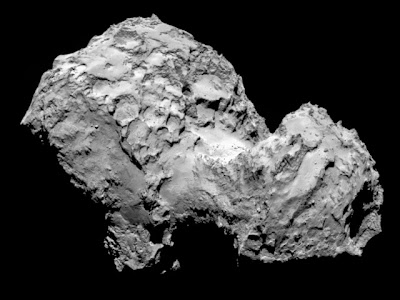 The probe is named after the Rosetta Stone, a stele of Egyptian origin featuring a decree in three scripts. The lander is named after the Nile island Philae, where an obelisk was discovered with Greek and Egyptian inscriptions. A comparison of the hieroglyphs on the Rosetta Stone and the obelisk catalysed the deciphering of the Egyptian writing system. Similarly, it is hoped that these spacecraft will result in better understanding of comets and the early Solar System. In a more direct analogy to its namesake, the Rosetta spacecraft also carries a micro-etched nickel alloy Rosetta disc donated by the Long Now Foundation inscribed with 13,000 pages of text in 1200 different languages. Source. 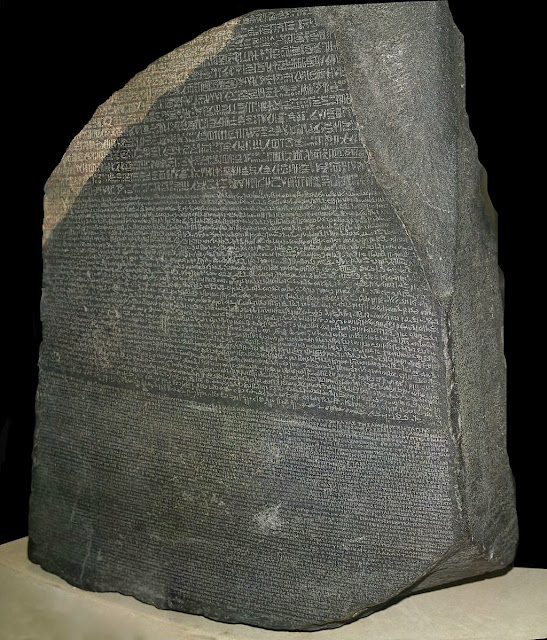 Images of comet and Philae taken by Rosetta's "OSIRIS instrument"

Just something that had played on my mind re-the name Gerasimov...

Derived from Greek γερας (geras) meaning either "old" or "honour".

Given the historical spacecraft's successful landing on a comet, the date should most certainly be noted.

Hiya, if One World Trade Center is an obelisk, then these events on the 12th may tie in with events ? :

Re Rosetta, there is a Rosetta Road in Peebles, allegedly part of the "roseline" which heads up towards Rosslyn Chapel/ Edinburgh :

A-swan is the name of the city at the End of Egyptian lands in the south, the Swan or two Swans are often seen as timeless universal sign of Love, the Swan is renowned for keeping the same partner, generally the love trade off between mammals results in a syngamy, the fertilization of the egg, thus the trade off becomes a island with in the waters of the womb.
the name Philae stems from Greek Phil, the beloved and lover of horse, which ties the water-horse/hippo Egyptian Goddess Taweret, whom was worshiped on the Nile as the Goddess of Fertility and Childbirth, while ae is often used as the reverse name for Ea where in Baby-lonian myth, was associated with farming-plough-seed-harvest, water/ea and semen, thus in turn, gives us the Gaelic name for Swan, Ea-la.