In the wake of the re-examination of the phrase "John 3:16" surfacing in the Aaron Hernandez suicide, here's an overview of Exodus 8:2 that was so prominent 18 years ago in Magnolia.

"Exodus 8:2 is alluded to over a hundred times throughout the movie." Magnolia (1999), Trivia, IMDb 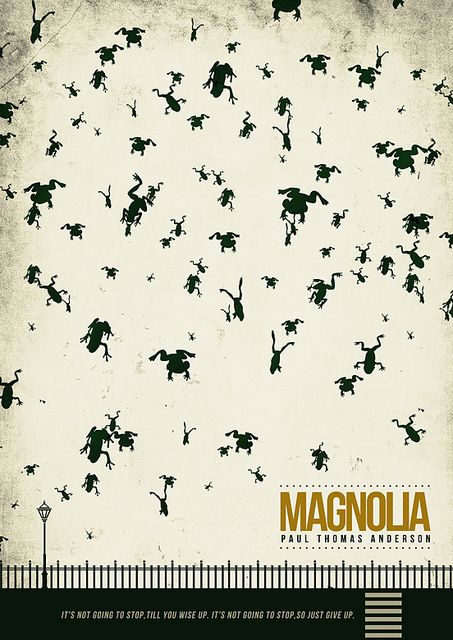 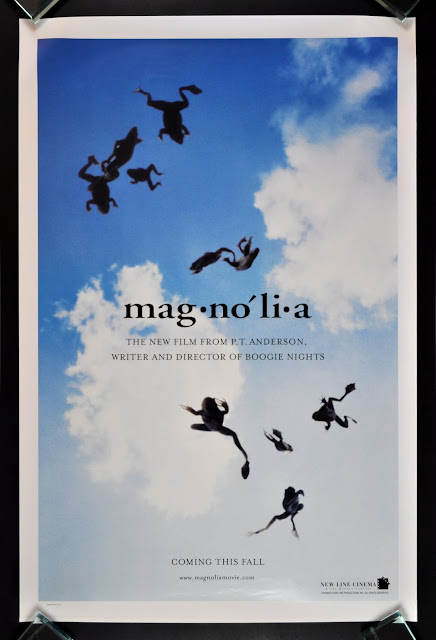 Ambrose Heron analyzed the mentions of "82s" credited in the trivia for the film at IMDb, and came up with this list:

The first weather forecast is 82% chance of rain.
The gambler in the prologue needs a 2 in blackjack, but instead gets an 8.
The coil of rope on the roof when Sydney commits suicide.
One of the posters held up in the ‘What Do Kids Know’ audience.
The movie poster at the bus stop on Magnolia Blvd.
The placard on the third hanged convict.
Jim Kurring’s box number at the date hot line.
Sydney Barringer’s mother and father’s apartment number is 682.
The forensic science convention starts at 8:20.
Delmer Darion flips over a stack of cards to reveal the 8 through 2 of diamonds.
Right after Jim Kurring sees Donnie Smith climbing up the building, you can see a flash of a sign on the side of the road that says “Exodus 8:2” (it’s visible again when the frogs fall and hit Kurring’s car)
The number on the fire fighter’s plane.
In Marcy’s mug shots, her criminal record number is 82082082082.
In the Smiling Peanut bar, there is a chalkboard visible with two teams, the frogs and the clouds, and the score is 8 to 2.
Spray painted on the cement as graffiti next to Dixon.
The kids were two days away from entering their eighth week as champions.
The first two numbers of the Seduce and Destroy Hotline (1-877-TAME-HER) are 82.
At the police station in the beginning of the movie, the clock says 8:02.
When Jim Kurring notices Quiz Kid Donnie Smith climbing on the Solomon & Solomon building he drives past a luminous sign saying “Exodus 8:2”.

Miami Herald published many screen captures of "82s" in Magnolia.


If you're unfamiliar with the reason why there are so many 82s in the movie.... The answer is found at the start of the quiz game show sequence, in which an audience member is holding up a sign that is taken away by an usher (played by Anderson himself). You can see the sign on the left hand side of this frame: 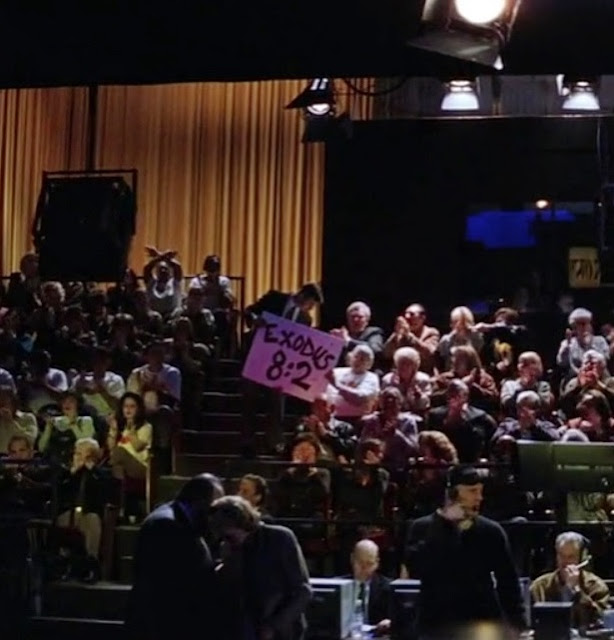 Later, during the peculiar rainstorm that happens at the climax of the movie, the same Exodus 8:2 reference appears on billboards, store signs and bus stops everywhere: 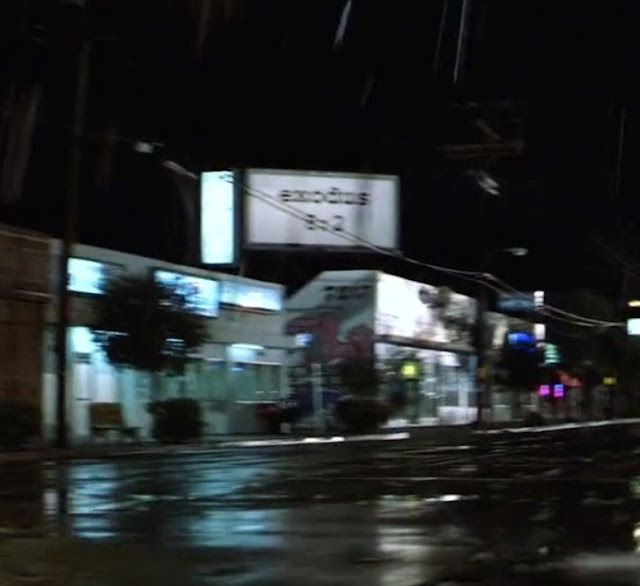 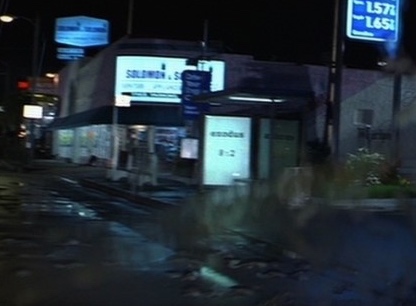 
And if you refuse to let them go, behold, I will smite all your borders with frogs.

According to the PTA fansite Cigarettes and Red Vines:


…it became a pasttime on set for Paul and the crew of Magnolia to hide as many references to the numbers 8 and 2 as they could in shots.


Raining frogs and Exodus (Bible) references
At the end of the film, frogs rain from the sky. Throughout the film, there are references to the Book of Exodus 8:2 "And if thou refuse to let them go, behold, I will smite all thy borders with frogs."
The film has an underlying theme of unexplained events, taken from the 1920s and 1930s works of Charles Fort. Fortean author Loren Coleman's 2001 book Mysterious America: The Revised Edition includes a chapter entitled "The Teleporting Animals and Magnolia", addressing the film. The chapter discusses how one of Fort's books is visible on the table in the library and the movie's end credit thanking Charles Fort.
The only character who seems to be unsurprised by the falling frogs is Stanley. He calmly observes the event, saying, "This happens. This is something that happens." This has led to the speculation that Stanley is a prophet, allegorically akin to Moses, and that the "slavery" the film alludes to is the exploitation of children by adults. These "father issues" persist throughout the movie, as seen in the abuse and neglect of Claudia, Frank, Donnie, Stanley, and Dixon. Source. 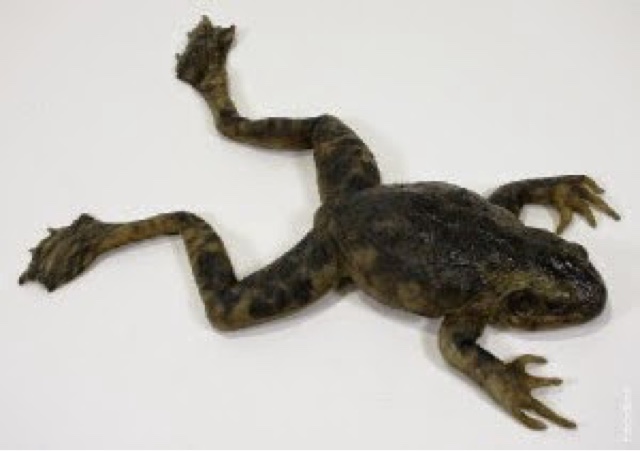 An authentic falling frog prop from Magnolia seemed an important item for me to preserve for the Museum I founded.


The actual number of characters in Magnolia reflects the 8:2 numbers. 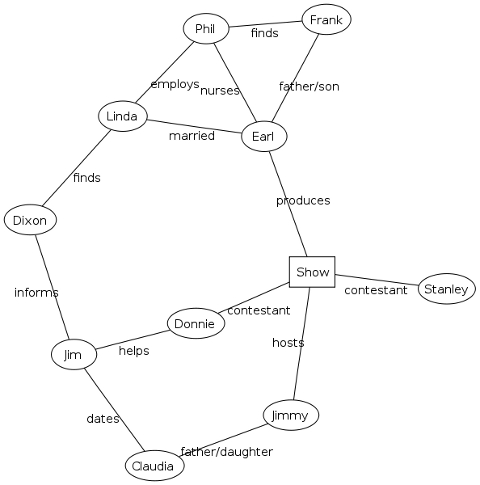 There are 10 characters, consisting of 8 children/relatives and 2 fathers (Jimmy and Earl), which is possibly significant given that their particular relationship is central to the film. Source.

But August 2nds have had threshold events associated with the date:

1939 – Albert Einstein and Leo Szilard write a letter to Franklin D. Roosevelt, urging him to begin the Manhattan Project to develop a nuclear weapon.

1973 – A flash fire kills 51 at the Summerland amusement centre at Douglas, Isle of Man.

Eighteen years have passed since the film was shot and released. Perhaps, unconsciously, the 8:2 pattern has been a living sync. Who knows?

Reading this, I couldn't help but think of the frog imagery associated with the whole Pepe/Kek meme...