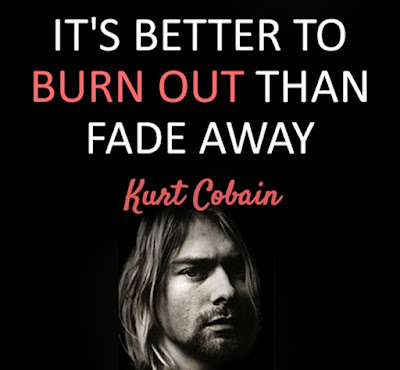 It is difficult to forget "Cobain."

Cobain
This unusual surname is of Old Norse origin and is found particularly in Scotland. It derives from an Old Norse personal name Kobbi, itself from an element meaning "large," and the Gaelic bain, denoting a "fair person," but is pronounced in common speech Cobban, with the diminutive ("little" or "son" of) form Cobbie.

As far as the name game, this all places Cobain in the realm of all that has been associated with Bain/Bane, and The Dark Knight (Batman) material.

In my book, The Copycat Effect (NY: Simon and Schuster, 2004), Chapter 13 is entitled "Cobain Copycats," and it deeply examines the evidence for over 70 copycat suicides in the wake of Kurt Cobain taking his own life on April 5, 1994. The US government, via the CDC, tried to convince suicidologists and the general public that they had "prevented" suicides in the Seattle area. The government supported a paper saying that only one (1) suicide could be linked to Kurt Cobain's suicide. They forgot to look beyond the Seattle area for their statistics, and instead to the worldwide impact, to where Curt Cobain had major influence.

Much has been written on the suicide vs murder theories. I won't go over that. You can read Wikipedia for their summary. I consider it a fact that Kurt Cobain died by suicide.