Are we seeing a potential move in violence from Waffle House to Trader Joe's? 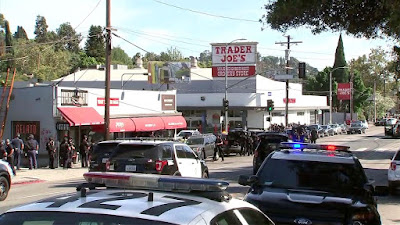 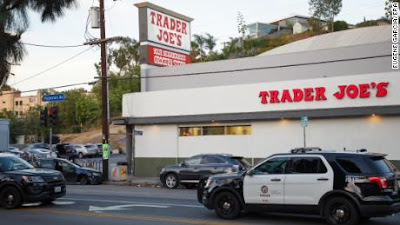 The Trader Joe's hostage incident occurred in Los Angeles on July 21, 2018, when a suspect, fleeing the police, crashed and ran at 3:30 P.M local time. Fears of a hostage situation arose. Police were involved by 4:00 P.M, and there were reports that the gunman opened fire. A woman was killed during the standoff, as the 28-year-old suspect was arrested. 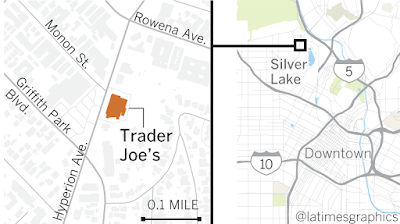 The incident occurred at the Silver Lake Trader Joe's.

Initial reports of the Trader Joe's hostage situation said:
"Officers began pursuing the suspect in Hollywood, and they arrived at the supermarket on Hyperion Avenue about 3.30pm."

One female hostage was shot and killed. The suspect's 76-year-old grandmother, Mary Elizabeth Madison, was shot 7 times and was reported to be in critical condition; and another female hostage, the perpetrator's girlfriend, was shot but merely grazed by the bullet. 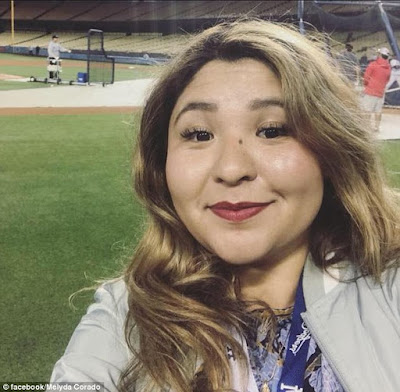 Corado means "ruddy or reddish" in Portuguese. On another thread someone said the words "silver" and "lake" both relate to the Moon. So this could be a foreshadowing of the Blood Moon lunar eclipse coming on Friday 7/27 (which some believe portends the end of the world). Astrologers say the Mars influence surrounding this eclipse can cause reckless actions, aggression and emotional problems. ~ Sibyl Hunter

“And I will show wonders in heaven above, and signs in the earth beneath; blood, and fire, and vapour of smoke. The sun shall be turned into darkness, and the moon into blood, before that great and notable day of the Lord comes.” - Acts 2:19-20

On July 21, 1969, at 02:56 UTC, astronaut Neil Armstrong became the first person to walk on the Moon. After his televised steps, Armstrong performed a strange ritual of an entirely different sort, of a dark and ominous character, took place at Tranquillity Base on the moon. It was not beamed to the earth via television. Astronaut Neil Armstrong carefully took out a Masonic apron, as did Buzz Aldrin, and held it up for the cameras. Did Armstrong do this for his father? See  here.

Back to Silver Lake and the Trader Joe's...

The violent episode appears to have begun on the evening of Friday, July 20, when Atkin's cousin spotted Atkins sleeping in his grandmother's home on 32nd Street near Long Beach Avenue with a gun under his pillow. According to Atkins' cousin, Charlene Egland, Atkins, who had lived with his grandmother since he was a young child, had been quarreling with his grandmother over his live-in girlfriend; the grandmother did not want her living in the home. Atkins shot his grandmother and his girlfriend at about 1:30 pm on July 21, a Saturday, then forced his girlfriend, who was bleeding from the gunshot wound, into his grandmother's car and drove off. Police traced his car to the Hollywood area and gave chase. Suspect crashed his grandmother's Toyota into a power pole in Silver Lake in front of the Trader Joe's supermarket on Hyperion Avenue at 3:30 p.m. Atkins emerged from the vehicle holding a handgun, and firing at the police. According to witnesses at the scene, Atkins fired at police officers at least twice. Corado, the manager of the Trader Joe's store was shot. There were between 40 and 50 people inside the grocery store.

During the hostage crisis, police officers in riot gear standing outside the store used mirrors to watch as hostage negotiators persuaded Atkins to release the hostages and surrender. At about 6:30 p.m., he agreed to handcuff himself, and was led form the building accompanied by four hostages to insure that he would not be shot. He was then taken into custody. 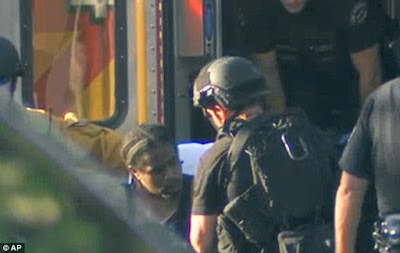 The suspect was described as an African-American male. He had lived with his grandmother since he was 7 years old. According to his cousin, Atkins had recently lost his job and two cars, according to his cousin, who lives next door, Atkins had previously slashed the tires on his grandmother's car and borked windows in hie house. The cousin described him as having a history of mental health problems, and as a quiet man who had been despondent about his future. She quoted him as having said, "The next thing I do, I'm going to die doing it or I'm going to jail."

He opened fire on the police, but no officers were reported injured. The gunman was identified as 28-year-old Gene Evin Atkins who was arrested, charged with murder, and is being held on $2 million bail.
Posted by Loren Coleman at 9:14 PM