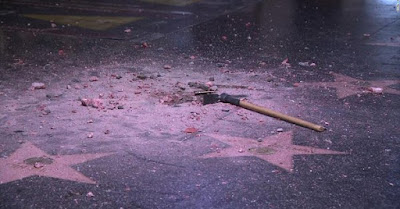 The 45th President, former reality television actor Donald Trump, had his star on the Hollywood Walk of Fame destroyed by a man with a pickax early July 25, 2018, Wednesday morning, according to the Los Angeles Police Department.

The Hollywood Walk of Fame comprises more than 2,600 five-pointed terrazzo and brass stars embedded in the sidewalks along 15 blocks of Hollywood Boulevard and three blocks of Vine Street in Hollywood, California. The stars are permanent public monuments to achievement in the entertainment industry, bearing the names of a mix of actors, musicians, directors, producers, musical and theatrical groups, fictional characters, and others. The Walk of Fame is administered by the Hollywood Chamber of Commerce and maintained by the self-financing Hollywood Historic Trust. It is a popular tourist destination, with a reported 10 million visitors in 2003.

The Hollywood Chamber of Commerce credits E.M. Stuart, its volunteer president in 1953, with the original idea for creating a Walk of Fame.

Hollywood division officers responded to a call at 3:33 a.m. (6:33 a.m. ET) to the tourist area. The LAPD said a man is in custody and is being questioned. Police said a man turned himself in at the Beverly Hills Police Department Wednesday morning.
Patricia Cox, a witness, told CNN affiliate KCAL/KCBS that she saw a man "going to town" on the ground "like it was his business just to be tearing up the ground," she said. "I thought it was work going on over here." 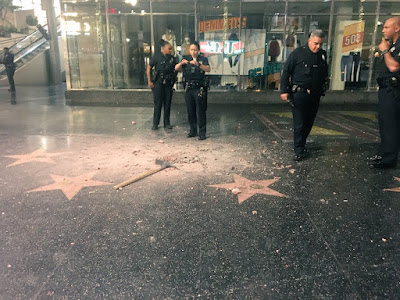 Video from KCAL/KCBS shows tourists taking photos of the defaced star in front of the Hollywood & Highland center, a major tourist spot in Hollywood. 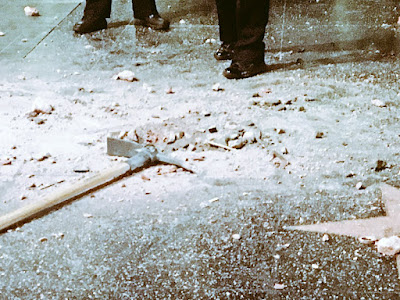 CNN has reached out to the Hollywood Chamber of Commerce for comment.
Trump's star has repeatedly been the target of vandalism and protests since the reality TV star's turn to politics. In April 2016, a Superman impersonator on Hollywood Boulevard said he had seen visitors make obscene gestures next to the star, deface it with paint, and allow a dog to relieve itself on the landmark. 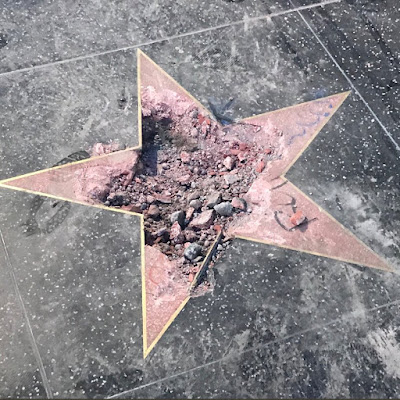 "People often stomp with anger on the star, others kick their heels over the star, and some spit. The last time, someone put a sticker over the star," Francisco Javier, another street performer who was dressed like Superman, said at the time.
A street artist constructed a tiny wall around Trump's star in July 2016, and in October of that year, the LAPD arrested a man who they said vandalized the star with a sledgehammer and a pickax. Source. 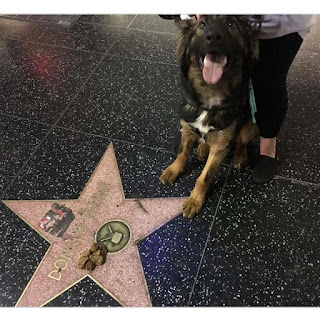 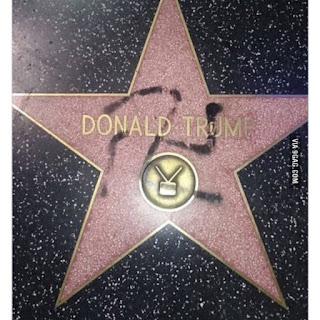 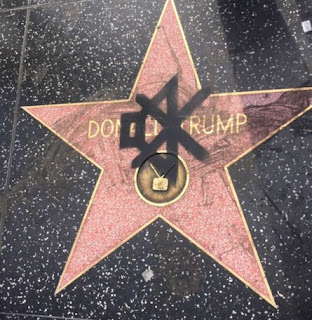 President Donald Trump's star—received as host of The Apprentice television series—was repeatedly defaced during the 2016 presidential campaign. In late October, near the end of the race, a man named Jamie Otis (who claimed to be an heir to the Otis Elevator fortune) used a sledge hammer and a pickaxe to destroy all of the star's brass inlays. He readily admitted to the vandalism, which he described as "civil disobedience" and "freedom of expression", and told reporters that he originally planned to remove the entire star and auction it to raise money for the women who accused Trump of sexually assaulting them. Otis was arrested three weeks after the incident, charged with one count of felony vandalism, and sentenced to three years' probation plus $3400 in restitution payments. The star itself was repaired, and has since been the site of pro-Trump demonstrations.