The Anarchy of Toppling Lincoln, Abolitionists, Black, and Jesus Statues 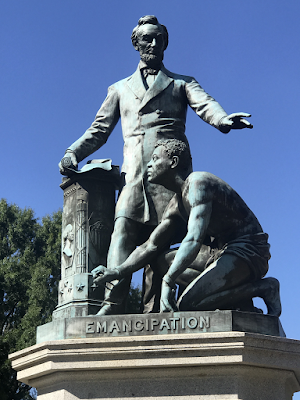 Will President Lincoln and Mr. Alexander Be Toppled on June 25, 2020?

On June 23, 2020, DC delegate Eleanor Norton announced plans to introduce legislation to remove the memorial. That same day, protesters on site vowed to dismantle the statue on Thursday, June 25, 2020, at 7:00 p.m. local time.

The call is now out to a crowd to show up at 7:00 p.m., in Washington D.C., to take down the Emancipation Monument. The statue shows President Abraham Lincoln and a soon-to-be freed slave. There is a claim that the motive to tear this statue down is because it shows a white man subjugating a black man. But the reality is different.

President Trump has said he will "send in the troops" to protect the statue. Stay tuned.

The Emancipation Memorial, also known as the Freedman's Memorial or the Emancipation Group, and sometimes referred to as the "Lincoln Memorial" before the more prominent so-named memorial was dedicated in 1922, is a monument in Lincoln Park in the Capitol Hill neighborhood of Washington, D.C.

Designed and sculpted by Thomas Ball and erected in 1876, the monument depicts Abraham Lincoln holding a copy of his Emancipation Proclamation freeing a male African American slave modeled on Archer Alexander. The ex-slave is depicted on one knee, with one fist clenched, shirtless and shackled at the president's feet. 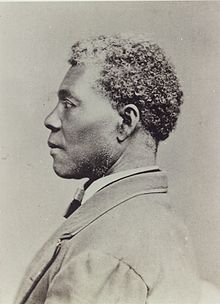 Archer Alexander (c. 1810 or 1815 – December 8, 1880) was a former slave who served as the model for the emancipated slave in the Emancipation Memorial (1876) located in Lincoln Park in Washington, D.C. He was the subject of an 1885 biography, The Story of Archer Alexander, written by William Greenleaf Eliot.

In 1869, the author Eliot was working with a group to build a statue of Lincoln. Thomas Ball had an acceptable model made, but Eliot's group wanted to have a real freedman pose for it. Eliot gave Ball a photo of Alexander, and he was chosen as the model.

In 1876, the statue was unveiled, with a number of notable people in attendance, including President Ulysses S. Grant, members of his cabinet, Supreme Court justices, other government figures, and Frederick Douglass, another former slave. However, neither Alexander nor Eliot was present.

More than a century and a half after the south’s defeat, a Yankee president is sticking up for defeated Confederates. Those wishing to tear down their statues “hate our history, they hate our values and they hate everything we prize as Americans”, Mr Trump said this week. Not since Woodrow Wilson has a US president been quite so praiseworthy of America’s defeated enemy. The fact that Mr Trump can do so this boldly is a measure of the US civil war’s unfinished business. 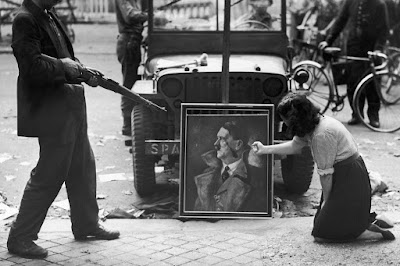 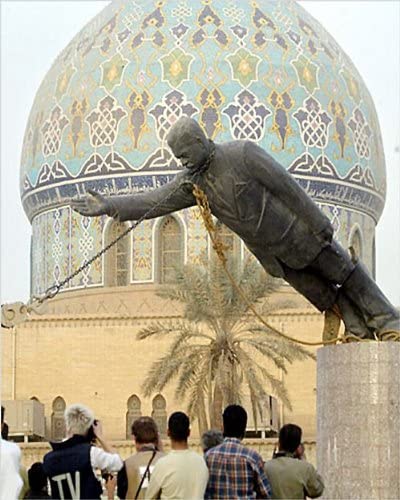 The point has been made often during the George Floyd protests that have brought down many Confederate statues across America. When Germany was defeated in World War II, symbols of Adolph Hitler were torn down without any soul-searching. When Iraq's Saddam Hussein was defeated in the US invasion, the statue of Hussein was ceremonially toppled.

Yet in the USA, the symbols of the Confederacy are found throughout the country. Only in recent weeks, not in 1865, have the flags, names, and statues been removed in great numbers - or considered for removal.

This month [President Trump] rejected calls to rename military bases that commemorate civil war enemies, such as Fort Hood, Fort Bragg and Fort Benning. All 10 such bases are in former slave-owning states.

Mr Trump’s dismissal of a proposal backed by US military figures gives even optimists pause. The fact that the US still honours men who fought against the stars and stripes in a war that killed more Americans than in the two world wars combined is a reminder of what is at stake. Yet it works both ways. By making the stakes so explicit, Mr Trump is unwittingly offering America a once-in-a-generation chance to end its myopia on the Confederacy. “We de-Nazified Germany,” said Ms Anderson. “We never de-Confederalised the south.”

Anarchy on the Horizon

What is cautionary and troubling is the over-reaction of the crowd, and the mindlessness zealous wave of statue toppling that seems unconnected to the people symbolized in the statues. The forthcoming confrontation over the Lincoln-Alexander statue in Lincoln Park appears a prime example.

Overturning statues for the stake of the power to be able to topple memorials is overtaking the demonstrations.

I started to notice this during the Albert Pike toppling, which occurred on Juneteenth. While, yes, Pike was a failed and fired Confederate general, the Lafayette Park statue and his "fame" was about his central role as the head of Scottish Rite Freemasonry. It seems the first of the "gray zone" statues. 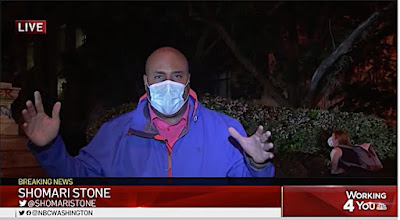 Shomari Stone reporting for Channel4NBC stated on the video of the toppling the Pike statue that it was being done by an organized group different that the peaceful assembly he had witnessed earlier in the evening. He felt it was a planned removal of the Pike statue. 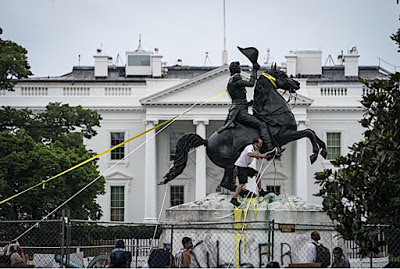 The defacing on June 22, 2020, of Lafayette Square's President Andrew Jackson statue seems similar. More symbolic than thoughtful. In office from 1829 to 1837, Jackson owned more than 500 slaves during his lifetime and was a key figure in the forced relocation of nearly 100,000 Native Americans.

Other examples are cropping up:

Several monuments depicting US president Thomas Jefferson (1801-1809), have also been vandalized. He drew up the US Declaration of Independence but owned more than 600 slaves.

The bronze sculpture of Theodore Roosevelt, which has been at the entrance of the American Museum of Natural History (AMNH) for 80 years, depicts the former leader on horseback towering over a black man and a Native American man -- who are both on foot.

In Prague, a statue to Britain’s World War II leader Winston Churchill was covered in graffiti daubed with the words "Black Lives Matter" in solidarity with the anti-racist movement in the United States. 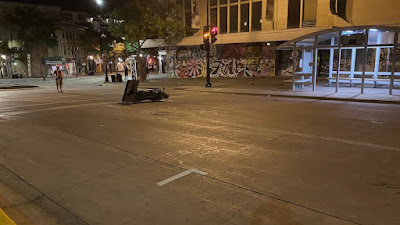 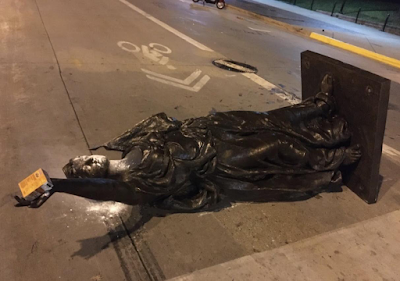 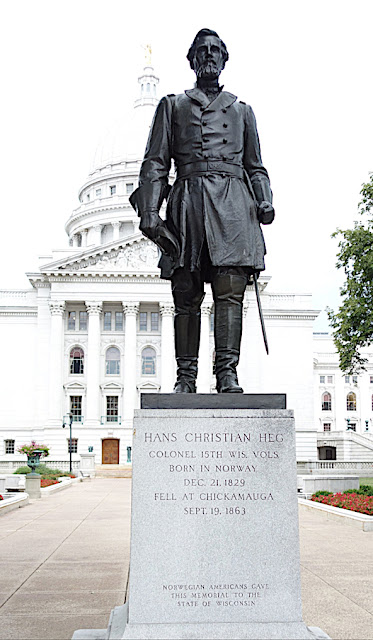 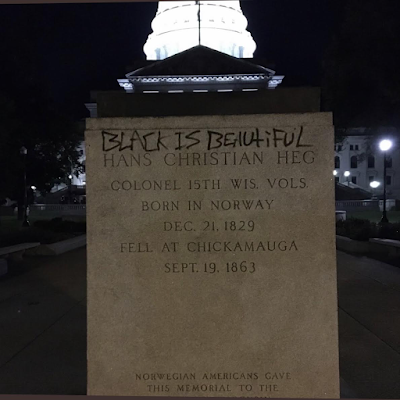 On June 23, 2020, demonstrators in Madison, Wisconsin toppled two statues. They tore down the "Forward" statue and dragged it away from its base at the steps of the Wisconsin State Capitol. The bronze allegorical statue, which is more than 100 years old, depicts a female figure standing on the prow of a boat, with her right hand stretched out while her left clasps the American flag. A short time later, the same group pulled down a statue of Col. Hans Christian Heg from the Capitol grounds and threw it into a nearby lake, according to WKOW. Heg was a Norwegian immigrant and abolitionist who served in the Union Army during the American Civil War. He led the predominately-Scandinavian 15th Wisconsin Volunteer Infantry Regiment into battle against the Confederate Army until his death at Chickamauga in 1863. 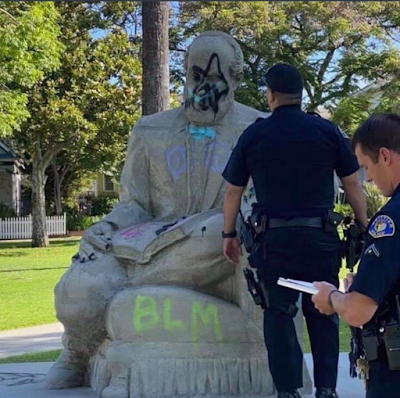 On June 14, 2020, in Whittier, California, a statue of John Greenleaf Whittier, the poet, abolitionist and Quaker the city was named after, was vandalized over the weekend. The still-unidentified vandal wrote “BLM” as well as an ”(expletive) Slave Owners” on the seated statue which is located at Central Park, 6532 Friends Ave. The suspect or suspects used different colors and spray painted the statue’s face, chest, bow tie, book and chair.

Mayor Joe Vinatieri said “He stood against slavery and racism...Many are upset about this including me because the city of Whittier is his namesake.”

“John Greenleaf Whittier did not enslave people, and indeed, was a leading anti-slavery activist in his time, in addition to being a renowned poet,” Celia Caust-Ellenbogen, archivist at the Friends Historical Library of Swarthmore College, wrote the Whittier Daily News.

Whittier was a delegate to the first meeting of the American Anti-Slavery Convention, edited anti-slavery newspapers, helped to establish the Liberty Party, wrote numerous poems supporting the abolitionist cause as well as an 1833 tract in favor of immediate and unconditional emancipation of enslaved people, according to Caust-Ellenbogen. 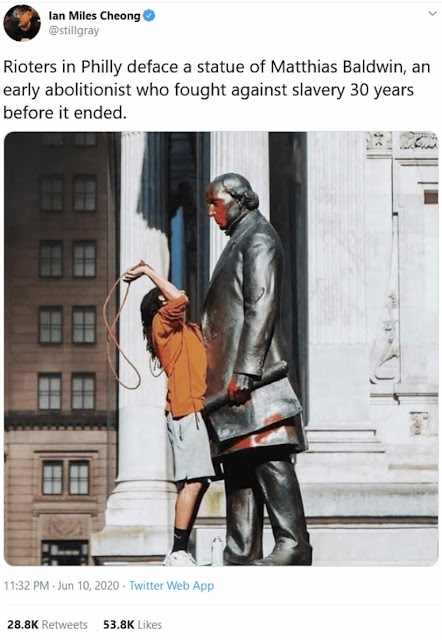 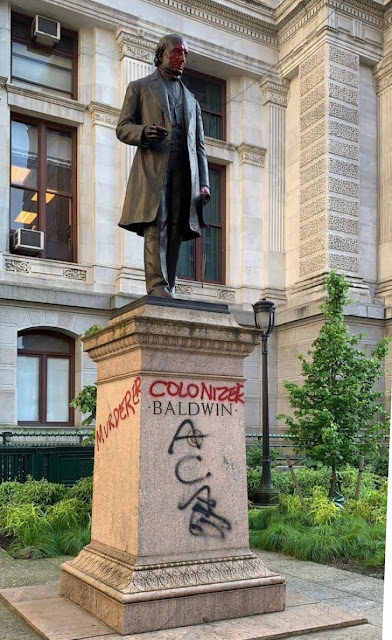 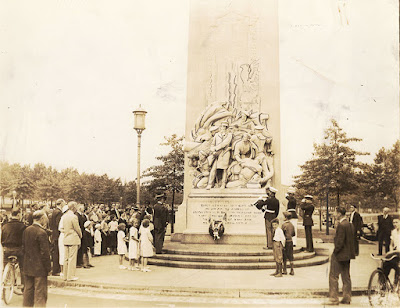 Some time before June 10, 2020, protesters have defaced a statue of Philadelphia abolitionist Matthias Baldwin, dousing it with paint and spray-painting the word “colonizer” on the pedestal. The statue stands outside Philadelphia City Hall.

Born in 1795, Baldwin moved to Philadelphia from New Jersey at the age of 16 and rose from an apprenticeship at a local jeweler to establish a successful business manufacturing train locomotives. Baldwin argued for the right of Blacks to vote in Pennsylvania during the state’s 1837 Constitutional Convention, and helped establish a school for Black children where he paid teachers’ salaries for years.

Protesters also defaced Philadelphia’s Civil War Soldiers and Sailors monument with graffiti reading “BLM.” That monument’s inscription reads, “All who have labored today in behalf of the Union have wrought for the best interests of the country and the world not only for the present but for all future ages.”

“The irony of vandalizing a monument to those who died to end slavery is lost on the morons who don’t know their history,” Joe Walsh, a member of the Friends of Matthias Baldwin Park said. 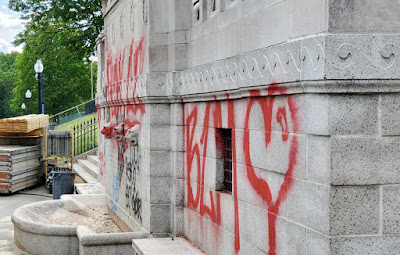 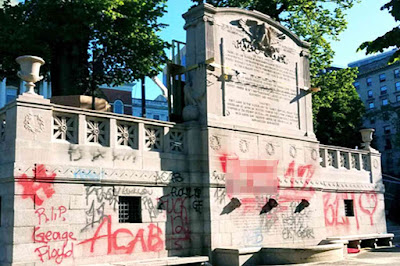 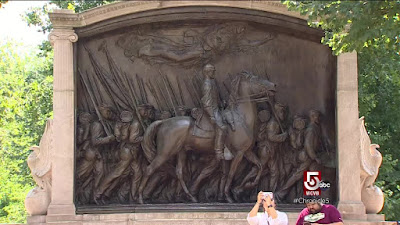 A monument recognizing the first all-volunteer black regiment of the Union Army during the Civil War was defaced in Boston during May 31, 2020 protests, with BLM and other tags.

"A thousand men signed up just after President Lincoln signed the Emancipation Proclamation, just think about that," said Liz Vizza, executive director of Friends of the Public Garden. "These are men who, if they were captured in the south, would be enslaved or murdered. But this cause was so important to them, they signed up to go fight for their freedom."

The Shaw Memorial captures the likenesses of the first African American volunteer infantry unit – the 54th Massachusetts Regiment – that fought after Abraham Lincoln signed the Emancipation Proclamation. Their colonel, Robert Gould Shaw, advocated for the men to join the war because they desperately wanted to fight for freedom. If the soldiers had been captured in battle they could have been enslaved or killed. Their heroic story was recounted in the 1989 Hollywood film Glory.

The regiment gained widespread acclaim on July 18, 1863, when it spearheaded an assault on Fort Wagner, a key position overlooking the water approach to Charleston Harbor. The 54th Massachusetts numbered 600 men at the time of the assault. Of these, 270 were killed, wounded, or captured during the engagement. Col. Shaw was killed, along with 29 of his men; 24 more later died of wounds, 15 were captured, 52 were missing in action and never accounted for, and 149 were wounded. These casualties represented the highest in the history of the regiment during a single engagement.

One of the soldiers, Sgt. William Harvey Carney carried the American flag throughout the battle, never dropping it despite being shot 7 times. Carney was the first black American to win the Congressional Medal of Honor for action.

The purposes of the demonstrations have derailed if the memorials of Black Union soldiers, abolitionists, and Lincoln are being vandalized and toppled.

And what of the shout out to bring down... 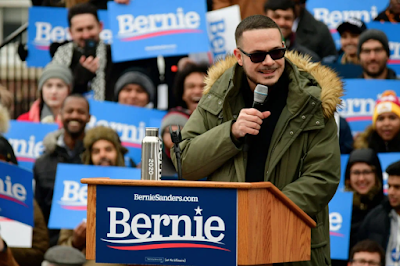 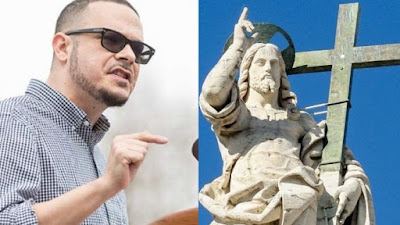 On June 24, 2020, Snopes.com investigated the claim that the statues of Jesus were a target of toppling. They discovered that "racial justice activist Shaun King" had tweeted about this, and thus it was a "Correct Attribution." 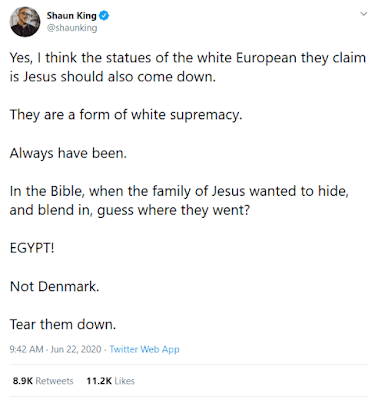 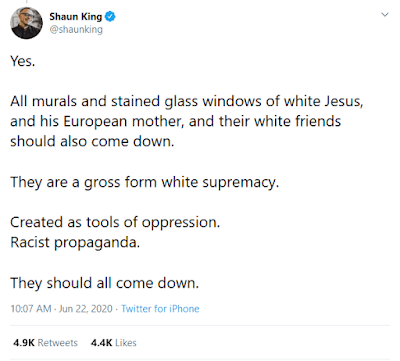 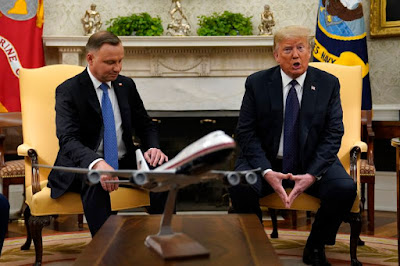