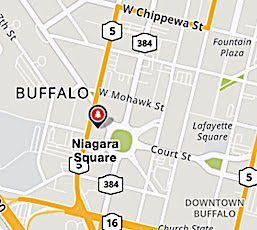 The Fayette Factor 2020 marches on.

Early on the morning of Friday, June 4, 2020, I tweeted notice of the significant "on this date" 195th anniversary of the naming of Lafayette Square in Buffalo. I noted the link, "George Floyd and the Fayette Factor: Fayetteville to Lafayette Square, from June 2, 2020, in my tweet. 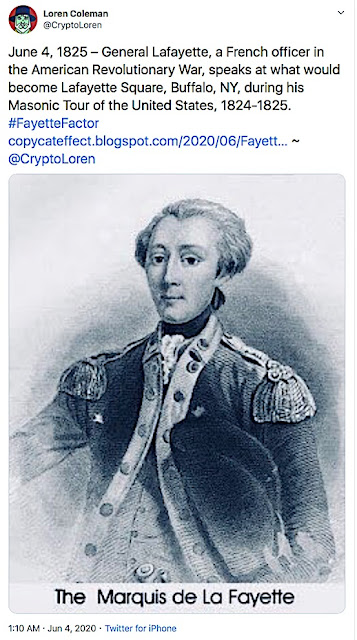 Lafayette Square is laid out in Joseph Ellicott's Buffalo city plan. The square is located three blocks east of Niagara Square and is the second most important space in downtown Buffalo. In 1825 American Revolutionary War veteran and French General Lafayette visited this square during his historic tour of the United States and gave a speech in the square. He spoke on a platform in front of the Eagle Tavern, a highly regarded hotel in its day, on June 4 as part of ceremonies to celebrate the fiftieth anniversary of the outbreak of the war.

That same year, 1825, Buffalo carried out its last official public hanging when brothers Israel, Isaac and Nelson Thayer were hanged for murdering John Love, which some accounts say occurred in the square, while others say it was at Niagara Square.

June 4 would turn out to be an important date for Buffalo in terms of the nationwide demonstrations.

On June 4, 2020, during the George Floyd protests in New York state, a curfew began in Buffalo, and police formed lines to sweep through the area.
At the Niagara Square, two Buffalo police officers shoved a 75-year old man who approached them. The man stumbled backwards and fell. The back of his head hit the pavement, knocking him unconscious, as blood flowed from his head. Nearby police appeared to walk past the injured man. The victim was taken to a hospital in serious condition where he was treated for a concussion and laceration.
The department issued an initial statement claiming that during a "skirmish involving protestors, one person was injured when he tripped & fell". Video of the incident was uploaded to Twitter and quickly became viral.
Police Commissioner Bryan Lockwood suspended two police officers without pay, and Mayor Byron Brown initiated an investigation.
As a result of the suspensions of the two officers, the Buffalo Police Benevolent Association, a police union, expressed its displeasure by declaring on June 5 that it would not pay any legal fees to defend any other Buffalo police officers for incidents related to the protests. The police union's president claimed that the suspended officers "were simply following orders" and "simply doing their job", while also saying that the victim "did slip".
All 57 police officers from the Emergency Response Team resigned from the team, although they did not resign from the department. According to the police union's president, the mass resignations were a show of solidarity with the two suspended officers. Source notes citations. 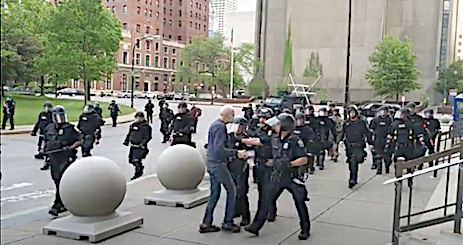 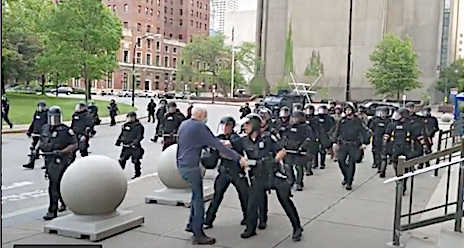 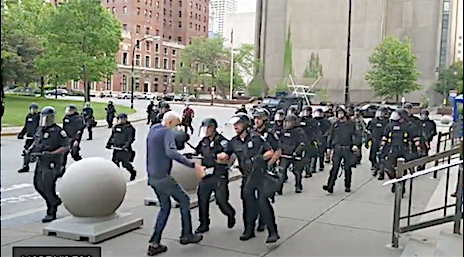 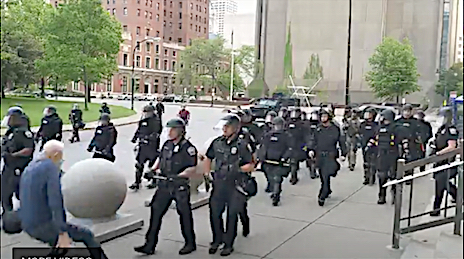 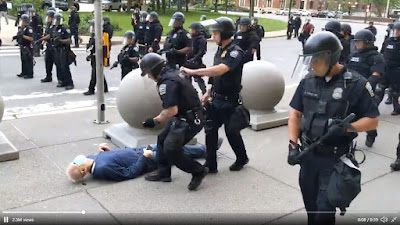 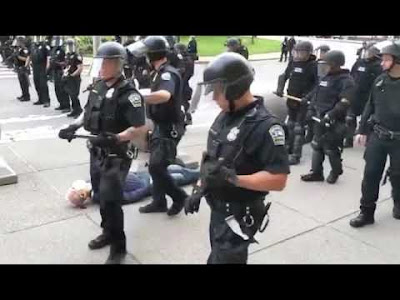 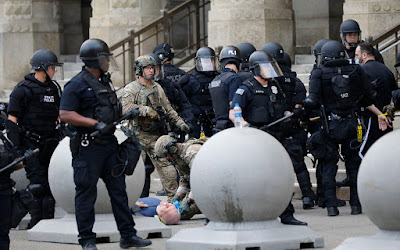 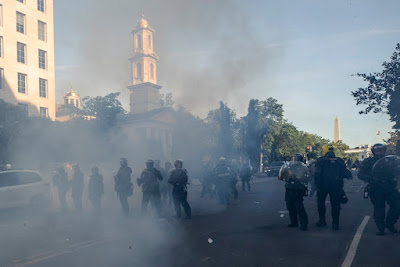 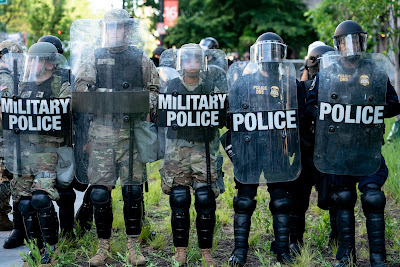 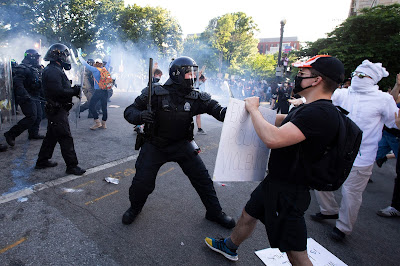 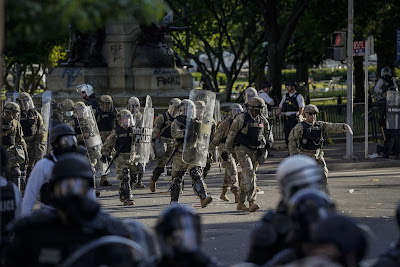 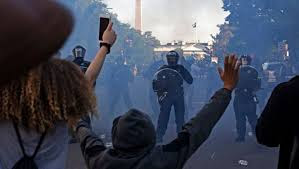 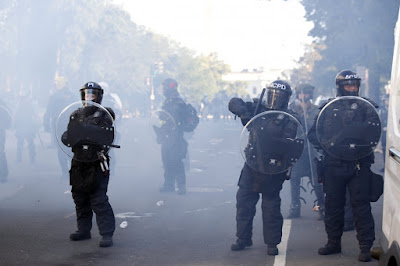 Police, military police, park police, and rangers clear out the peaceful demonstrators from Lafayette Square, for the photo op walk and Bible posing. 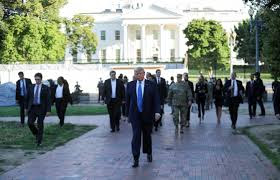 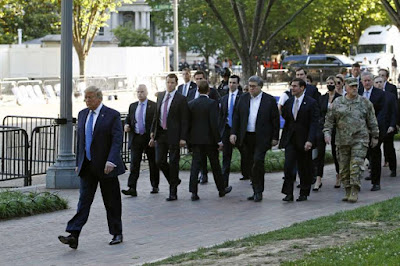 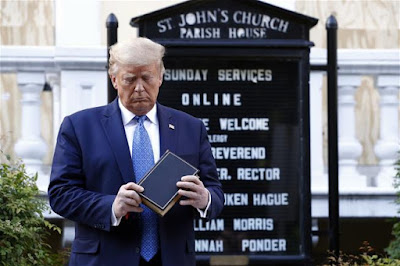 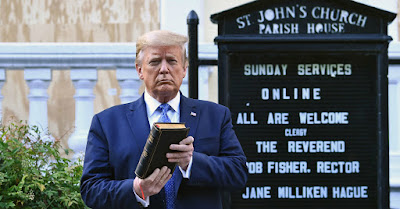 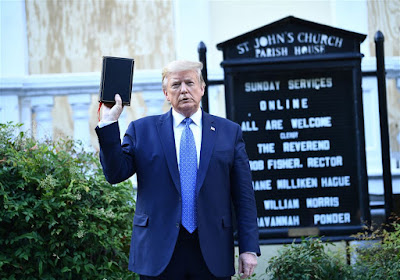 The Buffalo incident followed the widely discussed and photographed events at Lafayette Park/Square in Washington D.C.

On June 1, 2020, President Trump went to the historic St. John's Episcopal Church, whose basement had been damaged by fire, and posed for pictures in front of it holding up a Bible. To clear the route so that he could walk there, police and national guardsmen had used tearing agents in smoke devices (perhaps "tear gas"), rubber bullets, and flash grenades to clear a crowd of peaceful protesters from Lafayette Square, resulting in significant news coverage and denunciation by the bishop of the Episcopal Diocese of Washington.

As of June 7, 2020, at least 19 people have died during the protests. Sixteen of the casualties died of gunshot wounds. Wikipedia is keeping a running total of deaths and injuries to the protestors, here.