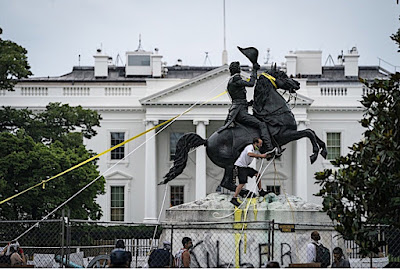 On June 22, 2020, protesters defaced the statue of Andrew Jackson in Lafayette Square, Washington D.C., as they attempted to topple it outside the White House.

The Jackson statue remained on its pedestal. Videos posted on Twitter and other social media showed that the protesters had climbed on the statue and tied ropes around it, then tried to pull it off its pedestal.

When asked about reports of pepper spray being used in Lafayette Park, a National Park Service spokesperson told NBC News: "I am still gathering information, but it is accurate that pepper spray was used to disengage the protesters from the statue and clear the area."


Interior Secretary David L. Bernhardt said in a statement that he had just left the scene at Lafayette Square "where another so called 'peaceful protest' led to destruction tonight. Let me be clear: we will not bow to anarchists. Law and order will prevail, and justice will be served."
Jackson was a Tennessee slaveholder and signed a law that led to the expulsion of Native Americans east of the Mississippi River in which they were forcibly moved west by the federal government. According to the Library of Congress, about 4,000 Cherokees died on the march which became known as the "Trail of Tears."
Trump has previously expressed admiration for Jackson, who was a populist, including during a visit to the Hermitage, the seventh president’s plantation in 2017. According to the Hermitage, Jackson owned about 150 slaves at the time of his death. NBC News.

On the morning of June 23, 2020, President Trump talked about the "attack on the Andrew Jackson statue in Lafayette Square" as he was on his way to board a helicopter to go to Arizona to inspect the "wall." He said he was going to sign an executive order protecting statues and monuments later. 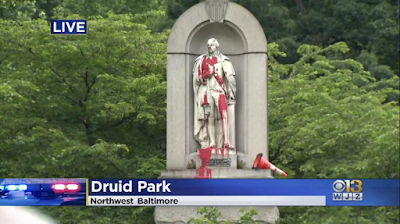 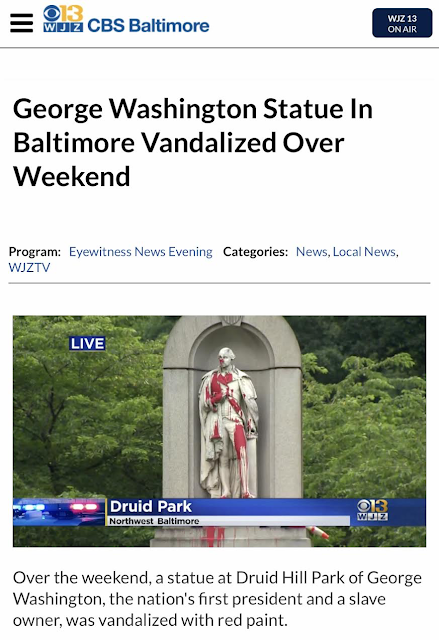 In Baltimore, on June 21, 2020, a statue and memorial to George Washington in a city park were vandalized with red paint. The Baltimore Sun reports that the memorial in Druid Hill Park in northwest Baltimore also had the words “Destroy Racists” and the initials for the Black Lives Matter movement written on the base.

Inaugurated in 1860, under the administration of city Mayor Thomas Swann, Druid Hill Park ranks with Central Park (begun in 1858) in New York City, Fairmount Park (1812) in Philadelphia and Golden Gate Park in San Francisco as the oldest landscaped public parks in the United States.

The land was originally part of "Auchentorlie," the estate of Dr George Buchanan (1696–1750), one of the seven commissioners responsible for the 1729 establishment of Baltimore Town, which was laid out by the commissioners the following year. Buchanan's country estate northwest of the town, and on the west bank and overlooking the Jones Falls stream running south to "The Basin" (today's Inner Harbor) of the Northwest Branch of the Patapsco River and future Port of Baltimore, included 579 of the 745 acres that comprise Druid Hill Park today. Renamed "Druid Hill" by War of 1812 Colonel Nicholas Rogers (1753-1822), and then his son War of 1812 veteran (September 20, 1788 - November 12, 1860)  who married Eleanor Buchanan, it was purchased in 1860 by the City of Baltimore from family descendant Lloyd Rogers.

August 4, 1753, George Washington, a young Virginia planter, becomes a Master Mason, the highest basic rank in the secret fraternity of Freemasonry. The ceremony was held at the Masonic Lodge No. 4 in Fredericksburg, Virginia. Washington was 21 years old and would soon command his first military operation as a major in the Virginia colonial militia.

A druid was a member of the high-ranking class in ancient Celtic cultures. Perhaps best remembered as religious leaders, they were also legal authorities, adjudicators, lorekeepers, medical professionals, and political advisors.

Fireworks are reported going off in cities throughout the USA. Police sirens and ambulances sirens going up and down Harlem's streets in parades at 3 AM. What's going on? (See video here.)


Cities across the US are experiencing a boom in the use of fireworks, with pyrotechnic-related complaints in New York City alone jumping 236 times higher than usual during the first three weeks of June.
Gothamist reported there were 6,385 calls to police about fireworks from 1 to 19 June, compared to 27 in the same period last year.
The New York Times attributed the spike in explosions to, “a release after months of boredom and seclusion in cramped apartments,” as well as “a celebration of hard-fought strides made during the demonstrations, and a show of defiance toward the police.” Other than sparklers, fireworks are illegal in New York.
***
Police in Hartford, Connecticut, who said they had been getting around 200 complaints each day about fireworks, called on people to be mindful of “those with PTSD, babies, children, elderly, & pets”.
Police in Salem, Boston, have started patrolling for fireworks after complaints increased 2,000%, CBS Boston reported.
In Pasadena, California, fireworks-related complaints have increased 400% in June, CBS Los Angeles reported, and last week, the LA County sheriff’s department seized a truckload of illegal fireworks valued at $10,000. The Guardian 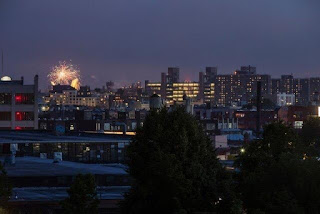 For those tempted to connect the fireworks to the protest, Phantom Firework’s sales uptick began two weeks before the May 25 killing of George Floyd.
***
“It’s happening across New York City. It’s happening in California. It’s happening in Illinois. It’s happening in North Carolina, in D.C.,” he says. It “could be a strange coincidence, but I need an explanation.” Source.
***
The author Robert Jones Jr., in a tweet thread that received tens of thousands of retweets, proposed that the fireworks were “a coordinated attack on Black and Brown communities by government forces; an attack meant to disorient and destabilize the #BlackLivesMatter movement,”he wrote.