The date of RFK's assassination, when he was actually shot, June 5th, has twilight connotations. As I detail in The Copycat Effect, the significance of the date is often overlooked. 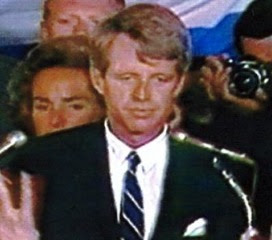 RFK died the following day, but the actual day he was shot – and this is the twilight factor ignored time and time again - was the first anniversary of the first day of the Six-Day War between Israel and its Arab neighbors that began on June 5, 1967.

Charles Bishara Bishop, the young man ~ who modeled himself a warrior in post 9/11 terrorism and who flew into the Tampa bank building on January 5, 2002 ~ labeled the war in his suicide note as "the 1967 Israeli-Syrian war".

Sirhan Sirhan's shooting down of a successful presidential candidate is one of the first acts of Palestine or Arab terrorism to take place on American soil, with 9/11 being the most recent major example. Sirhan Bishara Sirhan saw himself as a Palestinian militant.

Sirhan and his family had been uprooted from their home in Jordan by the Arab-Israeli war in 1948, and prosecutors at his trial claimed Sirhan, who was a Christian Arab, was vehemently anti-Israel.

Charles Bishara Bishop, whose suicide note clearly indicated he was a student of the 1967 Israeli-Arab conflict, may also have been a student of that other Bishara, America's first Palestinian assassin.

RFK was the first victim, via a Bishara, of the terrorism which was repeated on 9/11. It is a terrorism that would see itself visit America again through another plane piloted by another Bishara into a tower in Tampa exactly six months to the day from the June 5th anniversary date.

Don't forget RFK. And don't forget why RFK was shot on June 5th, even though June 6th is recalled as the day he died. Don't forget the motives behind the actions of Sirhan Bishara Sirhan and Charles Bishara Bishop either.
Posted by Loren Coleman at 8:43 AM

There is a really good documentary called RFK Must Die. It is available at most video rental stores.

What is your opinion about Sirhan being a manchurian candidate, a possible mk-ultra victim?

These are both strange cases. Sirhan claimed he began to hate RFK after hearing a news report that RFK was going to send fighter jets to the Israeli army. But in fact, Sirhan's notebook had strange repeated scribblings "RFK" must die" from before the report even came out.