You could say "Rosemary's" brother has killed himself in Castleton.

Rosemary's Baby (1968) starring Mia Farrow, as the pregnant woman who is having Satan's baby, aired on Cinemax on Friday June 19, 2009. The timing seemed, well, sadly appropriate. 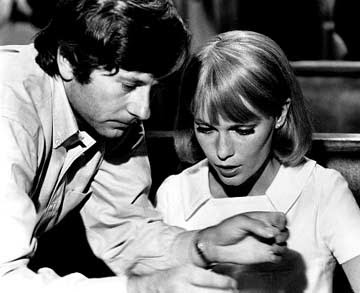 Mia Farrow's brother Patrick Farrow, 66, was discovered dead in his Castleton, Vermont art gallery on Monday, June 15, 2009. He died of a self-inflicted gunshot to the head. 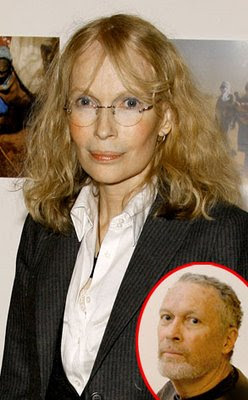 Mia and Patrick Farrow (above) are the children of Maureen O'Sullivan (who played Jane to Johnny Weissmuller's Tarzan, 1932) ~ shown below ~ and director John Farrow. 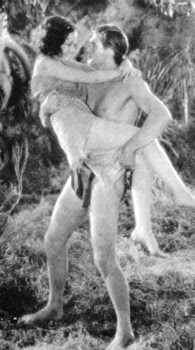 John Carradine was involved with the Ordo Templi Orientis (OTO), in the long tradition of trying to reestablish the Knights Templar. For example, another version was reborn in Ordo Novi Templi (Order of the New Temple) around 1907, in the medieval castle of Burg Werfenstein, which perched dramatically above the Danube with a swastika and fleur-de-lis flag over its tower.

Castles abound in the back stories here.

Needless to say, Castleton's Patrick Farrow suicide comes in the wake of the David Carradine mysterious death, which some have seen as a suicide or, at least, parasuicidal. Then there is too, the so-called "Paradise Syndrome."

Reuters reporter Rachel Noeman explained the term in a 1996 news story: "They inherit celebrity names, appear to have it all and live apparently gilded lives, but what may at first seem like paradise can end in pain or even tragedy." Noeman was reporting on the suicide death of Amschel Rothschild, 41-year-old chairman of Rothschild Asset Management and great-great-great-grandson of Nathan Meyer Rothschild -- who established in 1804 the merchant bank in the City of London that still bears his name. He hanged himself in a Paris hotel room ten days after Margaux Hemingway, who also was 41, killed herself. Noeman was making the link between the two, in terms of the "Paradise Syndrome."

As I noted in detailing this syndrome in my book, The Copycat Effect, the reaction is rather predictable. Amschel Rothschild’s widow Anita Rothschild repeated what is often said in the wake of such deaths, that it was “totally unexpected,” and the family was "shocked and devastated." 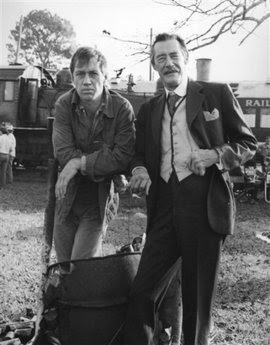 Intriguingly, John Farrow was a writer of titles for the 1929 film Four Feathers, which was a remake of the famed book of the same name, just as was 2002's Four Feathers. I previously mentioned Four Feathers here in connection with Heath Ledger (Dark Knight) and Lucy Gordon (who also recently died by suicide).

Patrick Farrow died by suicide in Castleton, Vermont. One of the major characters in Four Feathers, one of the soldiers to leave a feather symbolizing cowardice was named Lt. Castleton.

The name Castle keeps appearing in all of this.

"Castle" and "Hill" play a role in Rosemary's Baby.

Cassavettes is in the film. The character names of the couple who help impregnate Mia Farrow is Castavet. A character is named Dr Hill.

Associated with John Cassavettes is Castle Hill Productions which was formed by his widow Gina Rowland and Julian Schlossberg.

Rosemary's Baby was released June 12, 1968, in the wake of the RFK assassination highlighted here recently. 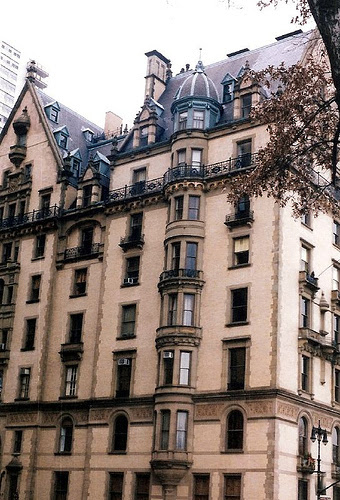 Rosemary's Baby was filmed at the Dakota Building (above), the site of John Lennon's assassination.

Roman Polanski was the screenwriter and director of Rosemary's Baby and it was Polanski's pregnant wife, Sharon Tate, who was murdered by Charles Manson and his Family. 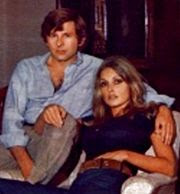 The killings were allegedly based on Manson's notion of "Helter Skelter," (an event), created in terms of Manson's scenario based on John Lennon's Helter Skelter (the song).

All of these things are obviously just coincidences. 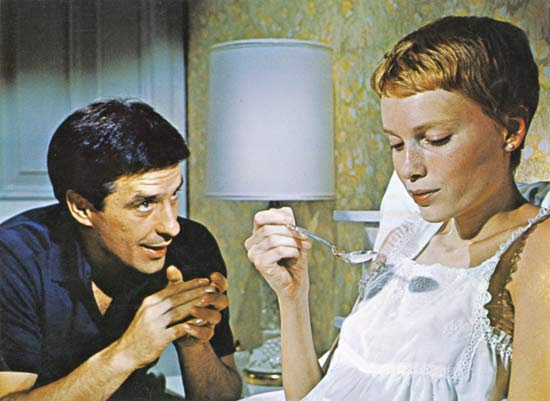 Sgt. Jason F. Dene, married with children, died in Iraq and his uncle Patrick blamed the "war criminal" George W. Bush for the loss. Patrick V. Farrow took his anger to the Letters section of the Rutland (Vt.) Herald.

To date all the family has heard from the Army is that Jason variously died 'in his sleep' and 'in his bunk' and 'in his quarters' and my favorite 'sleep apnea complicated by smoking cigarettes,' in other words, natural causes.

Because of the arrogant, corrupt lies of George W. Bush and his neo-con handlers my nephew is dead, and I am mad as hell...Jason Dene was not killed by enemy fire nor friendly fire but by Bush's brutal and cynical stop-loss program.

Because of Bush's abusive stop-loss policy, Jason had been sent into an unwanted third tour of duty. He was a father of three and could not afford to lose his pension. Some "volunteer Army."

During his three 15-month tours in Iraq, exposure to roadside bombs and other job-related injuries caused Jason to be hospitalized several times for concussion and internal bleeding and other injuries. Recently, Jason's condition was such that the Department of Defense flew him from Iraq to Dover Air Force Base for surgery. He was released from the hospital into the loving arms of the government who sent him directly back into Iraq. He was put on active duty while he was still on a liquid diet, unable to eat solid food because of a throat hemorrhage due to a botched surgery at a military hospital.

After his second tour Jason returned home with severe mental and physical issues. He was certainly in no condition to be pressed into a third tour. He wanted out of the army. But Jason was a victim of the liar's back-door draft...

Because of George Bush, the arrogant, the corrupt, the liar, the war criminal, my nephew is dead and my sister and the rest of my family are devastated.

I don't know what Jason died for....This war is as incomprehensible as it is unacceptable. In a cloud of confusion, politicians, generals and ordinary people have come to see that it is a disaster. Exit plans are being discussed while Iraqi citizens and young Americans like our Jason are being killed.

My sister is a nurse. For long years has lived in fear of the day when the two uniformed men came to her door to deliver the most terrible news a mother could hear. I hope I never see George W Bush.

I could not shake his hand. He and his cabal have killed my beautiful nephew. . May God, if there is one, forgive them. I cannot....How many more must die before this atrocity is ended?

A castle in chess can also be called a Rook.
To Rook someone = to cheat them [ in British English].
Ruh or Roh [ Hard H] in Czech = a corner and a horn, same as English Corn-Corner.
Perhaps the chess-piece rook, or standing in the corner on the chess board, as the rook does, symbolizes something in 'tessalate minds'.

I wrote about rook in latest post as I'd found a Bovril [ a beef drink] poster with the pope blessing a castle/turret sitting on the chair opposite.
The posters slogan = Two Infallible Towers

Most excellent work you are doing here, Loren.

life of the beatles said...

LENNON, 1980: "That's Paul completely. All that [Charles] Manson stuff was built 'round George's song about pigs and this one... Paul's song about an English fairground. It has nothing to do with anything and, least of all, to do with me."

Its said that hindsight has 20/20 vision, certainly looking back through time, one can see plenty of coincidence & synchronicity. Some how Charles Manson, The Beatles & The Beach Boys, share a peculiar connection to the # 911, among other things. The first record by the group that would become The Beach Boys, was released in 1961 on December 8th.
http://notesintune.blogspot.com/2010/02/beach-boys-2020.html