A snake. A semi-automatic assault rifle. But not a leader of men. 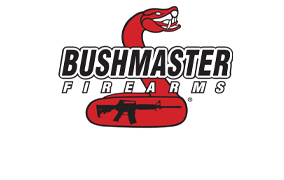 Josh Voorhees said it all in the headline to his December 26th article in The Slatest: "Weapon of Choice: Holmes, Roberts, Lanza and Spengler All Used Same Type of Assault Rifle."

A frequent pattern of some copycat effect events, whether of a series of mass shootings, suicides, or murder-suicides, is the same method being used, often down to the specific type of weapon employed.

Sadly, the gun of choice in recent horrific shootings has forever linked Aurora, Clackamas, Sandy Hook-Newtown, and Webster. A little research probably will link this assault rifle to other multiple victim shootings.

Oh, yes, it already has. John Allen Muhammed and Lee Boyd Malvo, the Beltway Snipers, used a Bushmaster to kill ten and injure three others in Washington, D.C., Virginia, and Maryland in October 2002. Prior to those shootings, apparently Muhammed and Malvo were involved other killings, such as the one on September 23, 2002. That killing of a victim in Baton Rouge, Louisiana, was also with a Bushmaster rifle. The Beltway snipers killed people with a Bushmaster XM-15 semiautomatic .223 caliber rifle equipped with a reflex sight. The manufacturer of the rifle in 2002 was Bushmaster Firearms, Inc. of Windham, Maine. 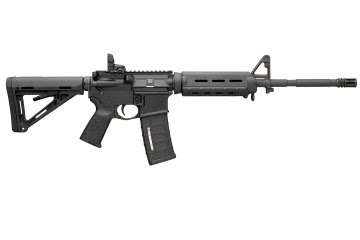 The Bushmaster is the gun in the news of late.

It would seem (and some sites confirm it) that this assault rifle was named after the largest venomous snake in the Western Hemisphere. Indeed, the snake is part of the logo of the company. (See at top.) 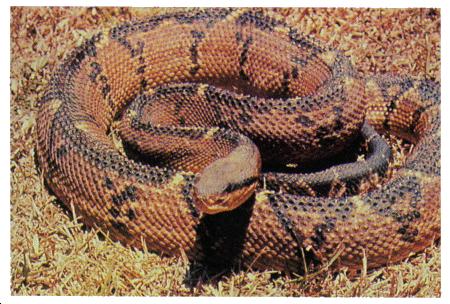 Lachesis, The Measurer, is on the right.

The common names for the three different species of this snake are the black-headed, the Central American, and the South American bushmasters. The bushmaster's genus name is Lachesis.


Lachesis is a genus of venomous pitvipers found in remote forested areas of Central and South America. The generic name refers to one of the Three Fates in Greek mythology who determined the length of the thread of life.....

One of the largest and most dangerous snakes in South America, this snake is capable of multiple-bite strikes and the injection of large amounts of venom. Even the bite of a juvenile specimen can be fatal. However, this snake is basically nocturnal and contact with humans is minimized for this reason.  Source.

Lachesis, The Measurer
The Three Fates are:

As a boy, I remember the bushmaster being mentioned, often, in the books of early naturalists like Raymond Ditmars. Recently one writer recalled a memorably dangerous encounter Ditmars had with a bushmaster in the 1920s, at the Bronx Zoo. Bushmasters are snakes not to be discounted.

The Bushmaster products site has teeshirts, cups, and bomber hats. They all subtly push the myth-making that the assault rifle makes its owner into venomous warriors among men. 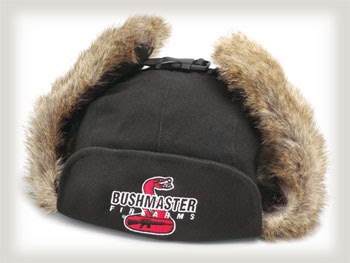 The Bushmaster .223 rifle has a history that appears to attract symbolic names.

"The AR-15 rifle was first developed by the Fairchild ArmaLite corporation in 1957. ArmaLite sold the rights to the design to Colt in 1959, and the weapon was adapted for military use as the M16; it went in to service in Vietnam in 1963. The modern AR-15 is a demilitarized version of the M16, and is now manufactured by several companies including Bushmaster...," noted Time.

The Bushmaster and its corporate parent, Freedom Group, is a private company owned by a New York-based hedge fund, Cerberus Capital Management, since 2006. 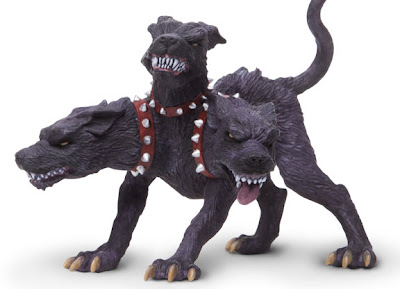 
Cerberus in Greek and Roman mythology is a multi-headed hound (usually three-headed), which guards the gates of the Underworld (Hades), to prevent those who have crossed the river Styx from ever escaping.

But now, in the wake of the Newtown shooting, Bushmaster is being put up for sale by Cerebrus because of the new attention to the rifle.

One name origin for the Bushmaster is approaching almost comical mythical status: That the Bushmaster rifle was named after (now former) President George W. Bush. Not true.

The Bushmaster, clearly, is the most venomous of guns, the one that measures the length of the lives of too many innocents.

The underlying theme with this gun is death and more death.

Cerberus has certainly come out to play.

To whom it may concern --

Here is (to my knowledge) a heretofore undiscussed synchronicity related to the Sandy Hook shooting/kidnapping (or whatever in reality it was). The day before -- Thursday 12/13 -- a "crazy woman" approached parents waiting to pick up their children outside the Mill Road Primary School in Red Hook, NY, and warned them that "terrorists" were "hiding in the woods" and planning to "take the children". Or so I have heard it told. The woman left abruptly without giving her name, and the incident was reported to police.

Consequently, on Friday 12/14, two local police vehicles were dispatched and two officers posted by the entrance to the K-2 entryway, by the parking lot where the incident occurred. The woman in question was eventually identified and warned by police to stay away from the school.

The basic facts of this story could be corroborated easily, should anyone wish to investigate, as emails were subsequently sent by the school principle to parents, so needless to say, many are aware of the uncanniness of the "crazy woman"'s warning.

There has been no public acknowledgement or discussion, to my knowledge, of the highly wierd, ominous nature of the incident. Interestingly it might be taken as an omen of corroboration of what some are claiming, e.g., that the incident was in fact a mass abduction. On that and other speculations I cannot comment.

Bushmaster: George H.W. Bush, in hospital with life thereatening high fever, is expected to die, media say.
*
Re: the above mentioned Mill Road primary schools have a Knight with a lance as mascot/logo. Very interesting.

In the RPG videogame trilogy Mass Effect, Cerberus is the name of a secretive paramilitary corporation headed by the Illusive Man --voiced by Martin Sheen-- who claim to have Humanity's best interests in mind, but in reality are nothing but ruthless terrorists.