The staffers of the Cleveland Browns, a National Football League (NFL) team, discovered an employee died by suicide on the morning of Saturday, December 1, 2012. The individual was found hanging in the equipment storage shed at the team's training facility in Berea, Ohio. 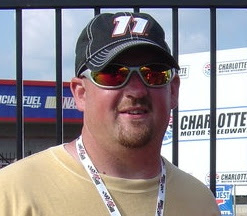 The name of the deceased is Eric Eucker (above: Facebook photo), according to Browns spokesman Neal Gulkis. Eucker, originally from Olmsted Falls, Ohio, did painting and mowing for the Browns at Berea and the Stadium. He was hired by the Browns in 2002, and enjoyed NASCAR during his vacation time.

Berea lies on sedimentary rocks, including significant amounts of Berea sandstone. This sandstone was formerly quarried for construction and also for use as grindstones. Indeed, the city proclaims itself "The Grindstone Capital of the World." The town's symbol is a grindstone, a tribute to the many grindstones that came out of its quarries. Before concrete came into wide use, Berea dimension stone was an important construction material and huge amounts of it came from Berea. Several lakes in the area are former quarry pits that have been allowed to fill with water, including Baldwin Lake, Wallace Lake and Coe Lake.