Attack of the Oompa Loompas 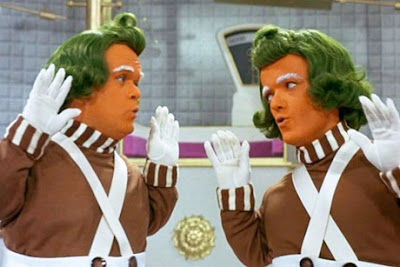 Year 2013's first media report of a Joker-like incident appears to be the one about Oompa Loompas attacking a man. This occurred on Prince of Wales Road, in the city center of Norwich, United Kingdom, in the early hours of Thursday, December 27, 2012, but is "trending," as they say, on January 1, 2013.

A spokesman for the Norfolk Police issued this statement:

Police are seeking a group of four people, two of whom were dressed as Oompa-Loompas, who attacked a male on a night out.

Two of the males were dressed as Oompa-Loompas from Charlie and the Chocolate Factory, with painted orange faces and dyed green hair and were wearing hooped tops.

One of the males in the group then pushed the victim to the floor before he got up. He was then hit on the head, fell to the floor and hit again.

Norfolk Police said a 28-year-old man was left with cuts to his face, nose and lip, as well as two black eyes, after being confronted by the fictional factory workers as he left a kebab house in Norwich.

Oompa-Loompas are fictional characters from Roald Dahl's books Charlie and the Chocolate Factory and Charlie and the Great Glass Elevator. In early editions of the novel, the little people are shown as African pygmies.

Following growing controversy and criticism, in later editions of Dahl's book, the Oompa Loopmas are white skinned and golden haired. Nevertheless, Oompa Loompas reportedly come from Loompaland, which is a region of Loompa, a small isolated area in the West Africa.

Today, due to the movies of the book, Oompa Loompas are known for their short stature, green hair, orange skin and white pants with protruding knees. 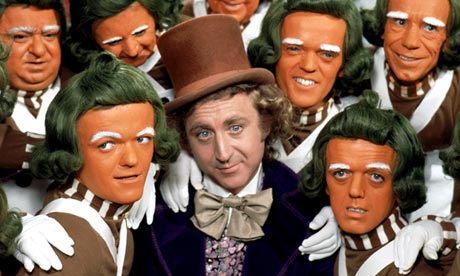 Photo: The men were dressed as Oompa-Loompas, as seen here with Willy Wonka in the Charlie and the Chocolate Factory film. Photograph: Everett Collection/Rex Feature.

In the 1971 film (Mel Stuart's Willy Wonka & the Chocolate Factory, starring Gene Wilder), the male Oompa-Loompas are seen working in the factory, and were orange-skinned. The 1971 film shows the Oompa Loompas wearing Germanic clothing with striped shirts and baggy lederhosen-like pants. 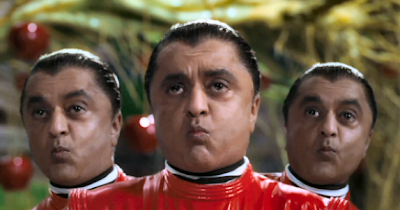 In the 2005 film (Tim Burton's Charlie and the Chocolate Factory, starring Johnny Deep), the Oompa Loompas are noted wearing tribal clothing in their native Loompaland and typical factory worker uniforms in the factory.

The Norwich attacking Oompa Loompas appear to have followed the 1971 model for the short men.
Posted by Loren Coleman at 8:28 AM

I spent last night reading "collativelearnings" analysis of Kubrick's "Clockwork Orange" and I awake to a story of 4 "Droogs" attacking a man in Norwich, one of the few places in the UK I have visited. HMmm.

Hmmm, indeed! And just yesterday I was discussing with my son about the fascinating, enigmatic, Roald Dahl, who's very intriguing life history I discovered through reading Jennet Conant's wonderful book, "The Irregulars". Of course, he couldn't help but bring up Charlie and the Chocolate Factory and, of course, the oompa loompas!!

The synchromystisities are flying like pigs!! Buckle your seatbelts, 2013 looks like it will be a very interesting year!!

This is at least the second violent incident in England involving the orange skinned, chocolate making folk. In 2009 in Dawlish, Devon, a drunken brawl involving an Oompa Loompa, Spiderman, and Tinky Winky broke out:

Well,I seem to be caught up in a sync web with you,Kotze and the syncheads,Alex Robinson and most of the authors out of "SYNC Book 2" -

Now it's Jack and the Dwarf syncs.-)

In a similar episode last summer a Seattle man claimed he was attacked by leprechauns:

The reports of leprechauns in Belltown was covered here at earlier:

Writing of Oompa Loompas check out the free Kindle book Amazon are giving away called
"I Want It Now!"
a memoir of the actress
Julie DAWN COLE
who played Veruca Salt in
"Wille Wonka And The Chocolate Factory"

It's full of great pictures from the set of that movie,too.