Death in the Ice Cream Aisle 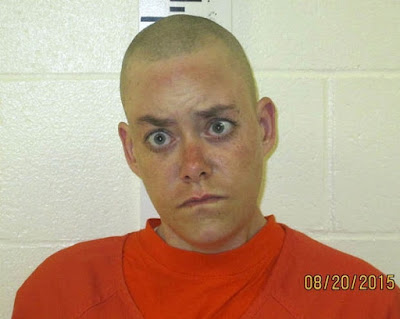 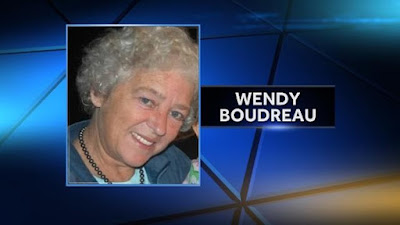 On Wednesday afternoon, around 3 p.m., August 19, 2015, the ice cream aisle in a Shaw's Supermarket in Saco, Maine, was the location of the shocking throat slitting of Wendy Boudreau, 59. Boudreau, a mother and grandmother, was killed by the former Tanisha Hopkins, who today is the transgendered Connor S. MacCalister, 31. 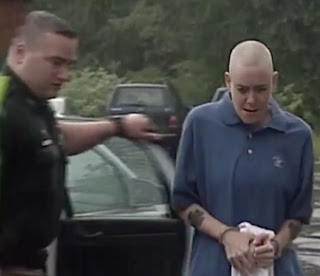 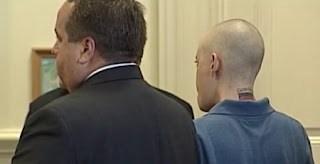 The shaven-headed, Nazi-icon tattooed MacCalister, armed with several knives, had planned the attack for over a month, according to the authorities. 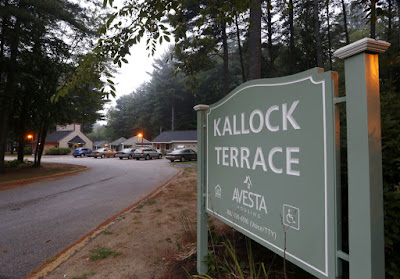 MacCalister was living at the Kallock Terrace housing complex in Saco, Maine.

After being tackled by other shoppers and held for police, MacCalister said he was going to keep attacking people randomly in the supermarket. He told police that he killed Boudreau because she "looked at him funny."

The reported stabbing took place after MacCalister followed Boudreau from the parking lot of the Shaw's supermarket into the ice cream aisle, grabbed Boudreau from behind and slit her throat, according to NBC's Portland affiliate WCSH 6.

McCalister went to the store to kill "several random people" because he was "angry with life" and "wanted to get back at someone," Maine State Police Detective Kristopher Kennedy wrote in the complaint formally charging MacCalister with the murder of Wendy Boudreau, a 59-year-old mother and grandmother, according to the Portland Press Herald.

Born Tanisha Hopkins and originally from Newburyport, Massachusetts, he has lived in the Biddeford-Saco area for much of his life, legally changing his name to Connor MacCalister in January 2005, according to court documents.
MacCalister lived in at least one group home in Biddeford and also had an address at a subsidized housing complex in Saco that serves adults with mental disabilities. Court documents from 2011 indicate that MacCalister didn’t work and lived on General Assistance. He also had applied for Supplemental Security Income.
Though MacCalister’s current address on Therrien Avenue in Saco was just one street from Boudreau’s house, police don’t believe MacCalister and Boudreau knew each other. Neighbors said MacCalister lived in an apartment at Kallock Terrace, an Avesta housing development.
According to Avesta’s website, Kallock Terrace’s subsidized apartments are designed for persons 62 and older who are disabled. 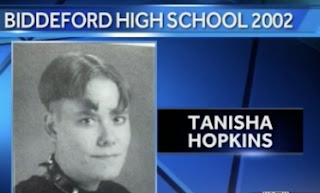 MacCalister was raised in foster care (by a family named Hopkins), and apparently had mental health problems for years. On his Facebook page, he says he went to Biddeford High School and is interested in men.

Law enforcement personnel said they are having housing problems with MacCalister and he is presently in a single cell administrative segregation in the female unit in York County Jail. The State of Maine has ordered a psychological evaluation of the suspect.

MacCalister appears to be the suspect's chosen name, one seemingly largely created from whole cloth. But a prominent character, Kevin McCalister, in the four Home Alone movies (1990-2002), is now part of our culture. "McCalister" is phonetically equivalent to "MacCallister." (H/T Matthew Bell.)

It appears to be related to the Irish/Scottish Gaelic name, Mac Alasdair, a clan associated with the Scottish clan of the Mac Donalds, derived from the personal name Alexander. MacCalister, thus means, in essence, "son of the defender of man."

Shaw's Ice Cream in St. Thomas, Ontario, was established in 1948 by Carl Shaw and his family. It does not appear to be associated with the Shaw's Supermarkets of New England.

In 1860, George C. Shaw opened a small teashop in Portland, Maine. Meanwhile, Maynard A. Davis established a group of small downtown grocery stores in Brockton and New Bedford, Massachusetts, called Brockton Public Market (BPM). In 1919, Davis purchased the George C. Shaw Company and made it a subsidiary of BPM.

Shaw's and Star Market are two American grocery store chains based in West Bridgewater, Massachusetts (there since 1972), employing about 30,000 associates in 155 stores. 135 stores are operated under the Shaw's banner in Maine, Massachusetts, New Hampshire, Rhode Island, and Vermont, while Star Market operates 20 stores in Massachusetts. 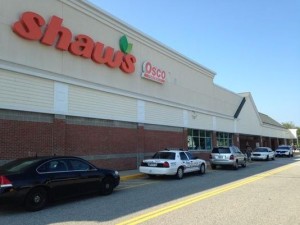 The scene of the attack: Shaw's in Saco, Maine.
Posted by Loren Coleman at 3:05 PM