Today's, August 25, 2015 attack on a family in France has weird links to the past treatment of the Illuminati.

A gunman has killed three members of the same family – including a baby – and a police officer, during a shooting at a travellers’ camp in northeastern France.

The suspect, who is a member of the traveller community in the town of Roye, killed a six-month-old baby, a woman and a man believed to be a grandfather during the attack at 4:30 p.m. local time, near an Intermarche supermarket, according to police and a Paris prosecutor. Another child was injured. 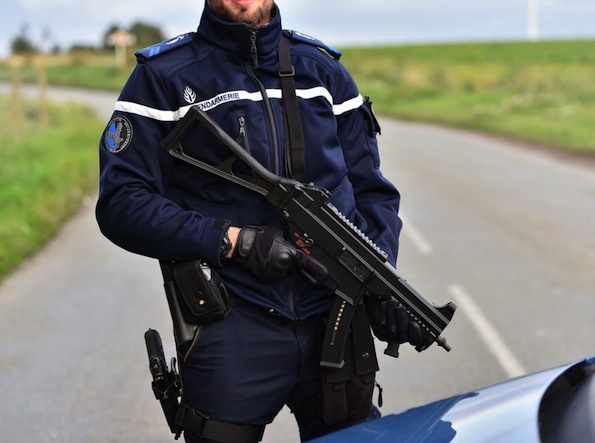 Police who responded to the scene were greeted with gunfire. The shooter (allegedly drunk) seriously injured one 44-year-old officer – who later died - and slightly wounded another.

A police source said that the incident is understood to be a “criminal matter,” and not linked to terrorism. 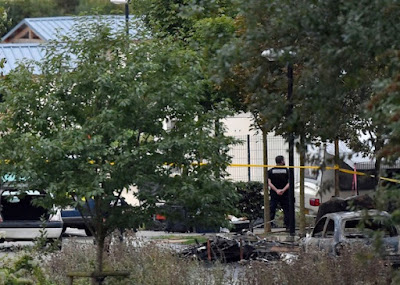 Intriguingly, the camp's location (shown above) is directly tied to the history of the Illuminati.

Roye is a commune in the Somme department in Picardie in northern France. In 1634, religious refugees from Seville, Spain, known as the illuministes tried to establish themselves in France - in Roye. They claimed to be inspired by celestial messages. Pierre Guérin, curate of Saint-Georges de Roye, was converted and himself created many disciples, called "les Guérinistes." The Catholic Church sought out and executed all of them, by 1635.

Illuministes: Yes, we are talking about the Illuminati. See also, here.

Today's allegedly unrelated August 25th French shooting in Roye follows closely - in time and space - that of the Thalys, France, train attack of August 21st. Here is the Wikipedia summary of that event:

At approximately 17:45 (5:45 p.m.) on 21 August, on Thalys train 9364 traveling from Amsterdam to Paris, a 26-year-old Moroccan man, reportedly identified as Ayoub El-Kahzzani, was exiting the toilets on train car No. 12, reportedly as soon as the train passed the border into France. He was shirtless and visibly armed with a Kalashnikov rifle, for which he had nine magazines of ammunition.
A 28-year-old French banker, only known as "Damien A.", was heading to the toilet as the armed gunman was exiting. Damien A. attempted to restrain or disarm the gunman but in the ensuing struggle lost his balance and fell to the floor. A French and American academic working at the Sorbonne, 51-year-old Mark Moogalian, then attempted to wrest the rifle from the gunman, who then drew an automatic Luger pistol and shot Moogalian through the back of the neck. According to Agnès Ogier, the director of Thalys, another bullet grazed the train's conductor. The assailant also tried to shoot his rifle, but it jammed.
The gunman was then tackled and subdued by a group of three American friends, two of them off-duty members of the U.S. Armed Forces. They were identified as 23-year-old United States Air Force Airman First Class Spencer Stone of the 65th Air Base Wing; 23-year-old Sacramento State senior Anthony Sadler; and Alek Skarlatos, a 22-year-old Oregon Army National Guard Specialist on holiday after deployment in Afghanistan.Sadler told CNN that when the gunman opened fire, Skarlatos yelled "Get him!" after which "Spencer immediately gets up to charge the guy, followed by Alek, then myself." In an interview with Sky News, Skarlatos added that they had been lucky that the attacker's rifle had jammed.
Stone was reportedly the first one to attack the gunman and was slashed multiple times while trying to subdue him, sustaining injuries at the head and neck. Stone put him in the chokehold, holding on though the assailant was cutting him with a box cutter, nearly severing his thumb. Skarlatos seized the assailant's rifle and beat him in the head with the muzzle of it until he was unconscious. A British passenger, 62-year-old businessman Chris Norman, and an unidentified Frenchman came to their aid to hold the gunman down. They used Norman's T-shirt to tie his arms behind his back. They then helped Moogalian, who was losing a lot of blood through his gunshot wound. Stone initially tried to wrap his shirt around the wound, despite having an injured hand and cut eye. However, he realized it was not going to work and instead stuck two of his fingers down Moogalian's wound, found the carotid artery, and pushed down, which stopped the bleeding.
A video made with a cellphone shows the alleged perpetrator immobile, lying hogtied on the floor of the train, and blood visible on the windows and seats.
As the attack took place, the train, which was carrying 554 passengers, was passing Oignies in the Pas-de-Calais department. It was rerouted to the station of nearby Arras. Moogalian was airlifted to the University Hospital in Lille, while Stone later underwent surgery on his injured hand.
Further details on that event, see here.

Posted by Loren Coleman at 5:27 PM