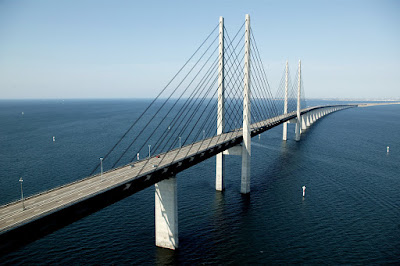 The Øresund Bridge is symbolic of the background to recent stories of violence in Sweden.

Two people were killed in an Ikea store on August 10, 2015. Another man was wounded.

Two men were arrested. Authories have not identified the men, but said that they are Eritrean asylum-seekers who were living in a home for refugees in Vasteras.

Only hours earlier, violence flared again in southern Malmö, Sweden's troubled gateway to Europe. Home to the Øresund bridge and consequently the first city most of Sweden’s immigrants arrive at, the city is stalked by terrorist-like event. Yet another grenade, presumably like the others following the human trafficking route through Europe to be smuggled into the nation over the bridge, exploded on August 10, 2015, around eleven o’clock local time.

Grenade attacks in Malmö have been another form of violence linked to immigration. The southern Swedish city of Malmö has seen a string of startling explosive attacks in recent months. The pattern of targets – from flats to offices and one building housing a Ramadan celebration – appears random. The best guess, experts say, is a gang turf war that could easily see fatalities as tit-for-tat attacks spiral. But why that?

In more than a dozen attacks involving everything thing from Balkan grenades to bombs placed in cars and parks, explosions have wounded two people so far this year in Malmö. No one has been killed but not one has been arrested, either.

With a population of just 300,000, Malmö has long been a smuggling hub due its closeness to Denmark, with which it has been connected by a bridge to Copenhagen since 2000.

Around a third of the city's population are immigrants - double the national average, and nearly one in three is unemployed. Among young immigrants, the rate is nearly 40 percent - Somalis, Iraqis, Bosnians and Iranians squeezed into concrete tenement blocks.

The Øresund or Øresund Bridge (Danish: Øresundsbroen, Swedish: Öresundsbron, joint hybrid name: Øresundsbron) is a double-track railway and motorway bridge across the Øresund strait between Scania (southernmost Sweden) and Denmark. The bridge runs nearly 8 kilometres (5 miles) from the Swedish coast to the artificial island of Peberholm, which lies in the middle of the strait. The crossing of the strait is completed by a 4 km (2.5-mile) underwater tunnel, called the Drogden Tunnel, from Peberholm to the Danish island of Amager. The term Øresund Bridge often includes this tunnel.

The Øresund Bridge is the longest combined road and rail bridge in Europe, and connects two major metropolitan areas: Copenhagen, the Danish capital city, and the major Swedish city of Malmö. 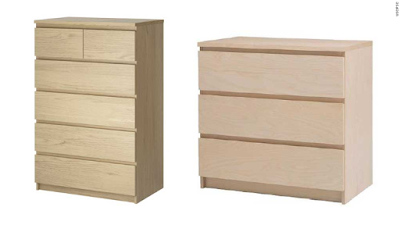 [In a name game "coincidence," Ikea has been under fire in recent weeks because of their chest of drawers that have tipped over and injured and killed children. The name of the chest of drawers: Malm. Fourteen reports of Malm chest of drawers have been reported causing four injuries. Three deaths since 1989 have been attributed to other Ikea chests and dressers. But the two highly publicized Ikea Malm deaths happened in 2014. In February 2014, a 2-year old boy from West Chester, Pennsylvania, died after an Ikea Malm six-drawer chest, measuring 48⅜ inches high, tipped over and pinned him between the drawers and his bed. In June 2014, a 23-month old child from Snohomish, Washington, died after a 30¾ inch Malm chest of three drawers tipped over onto the child.]

In terms of violence in Sweden, the most shocking attack came in the industrial port city of Gothenburg in March when two masked gunmen entered a bar and sprayed a crowd with bullets during a soccer game. Two men — one reportedly tied to a local gang — were killed in the shootout and at least 10 other people were injured.Immigration, in particular, has become a touchy subject in Sweden, a country that has long prided itself on its tolerance. Germany, France and Sweden have combined to adopt a majority of the asylum-seekers flooding into Europe from Africa and the Middle East.

The Malmo's most infamous killer was Swedish-born - Peter Mangs was arrested in 2010 for three murders and 13 attempted murders over a seven-year period, a string of shootings in Malmo targeting immigrants. Mangs even plotted to kill Swedish soccer star Zlatan Ibrahimovic, whose parents immigrated from Bosnia, because he displayed “typically Balkan behavior.”

Although Sweden has largely escaped acts of terrorism, the country has seen more than 300 citizens leave to fight in Iraq or Syria as well as roughly 30 neo-Nazis join fighting in the Ukraine.

The knife attack at IKEA in Vasteras and the grenade attack, shootings, and more in Malmö are indirectly related to a string of items, predicted by futurists in the 1980s. The global food shortages cause turmoil, and more governments will then be in distress. Immigrant stress, governmental distress, and other internal/external distrust tends to result in regional conflicts and migrations causing resulting difficulties in the aslymn countries. Violent and mobile reactions from repressive regimes and rightwing factions are predictable.

The droughts around the globe do have an impact. The Arab Spring revolutions swept the Middle East, and did have a foundation cause in the worldwide shortage of food and the resulting poverty. One futurist, Iben Browning specifically predicted all of this. Because Americans and other developed countries are isolated from food shortages, the effect is somewhat lessened. But it can come home to roost in other ways.

Iben Browning told us what we would be seeing unfold on our cable news channels. He was the ultimate cultural futurist. He predicted many things that have come to pass. Behind it all are the volcanoes, weather pattern disruptions, food shortages, poverty, feelings of discontent, immigration and wars. Connecting the dots involves more that the event to event copycat effect.

Are you kidding me????? As we are making plans to move there in a couple of years for schooling.....so much so that we're teaching the kids the language.....I have a friend in Malmo, these were my questions, but there was no indication of such a problem, though I suspected...now this......as I was standing on those Malm dressers in the bedroom, painting the wall (yes, no ladder) and reading about the post from afar regarding the previous IKEA post.....bummer........still probably going though....