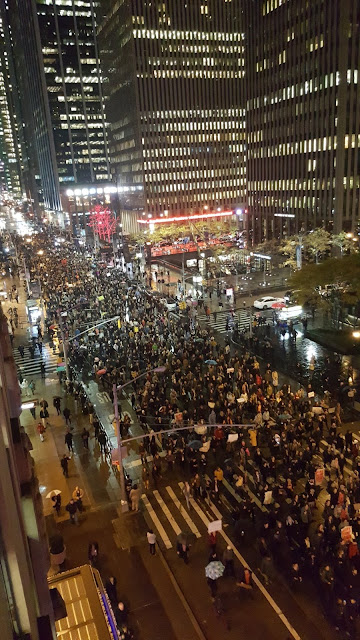 The copycat effect is calling forth mass actions by people across the country, directly due to Donald Trump's surprise winning of the presidential election of 2016. 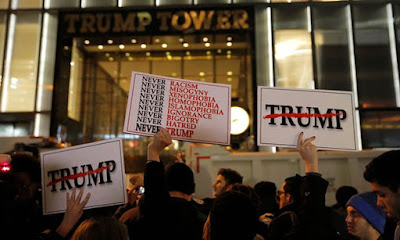 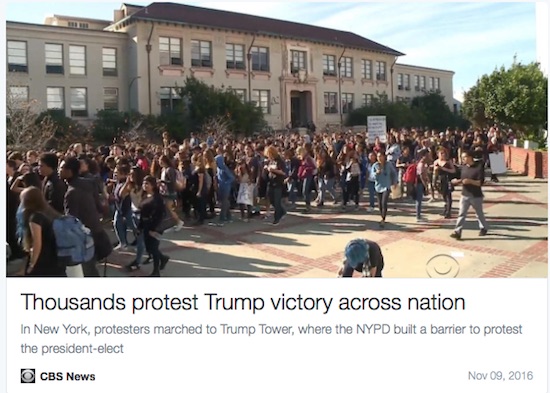 Reports of street protests by hundreds and thousands of people have be noted on Wednesday afternoon and night, 11/9 in the following locations:

At Berkeley High School in California, about 1,500 students walked out of classes Wednesday morning. In Des Moines, Iowa, it was hundreds of high school students who left class to protest of election results. In Phoenix, about 200 students from Carl Hayden High School marched to the state Capitol in protest. Source.

Clown cartoons also popped into the newspapers and other media after the Trump victory. 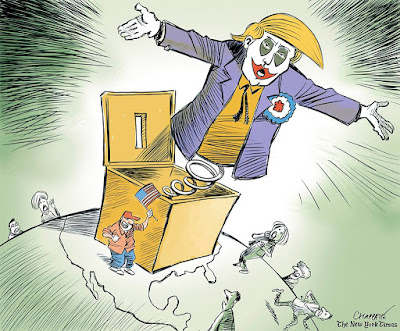 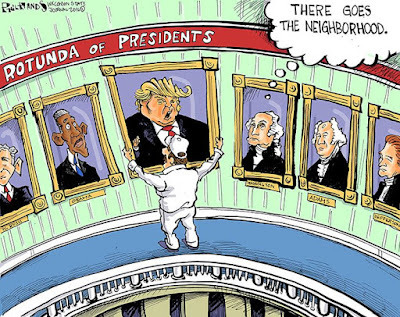 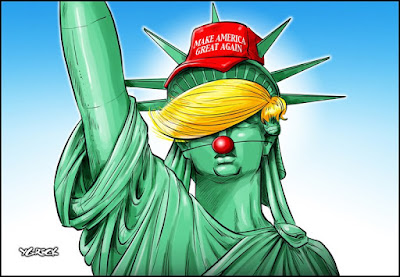 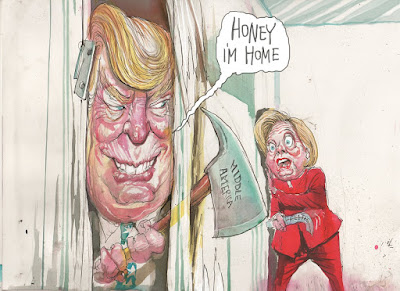 Suicide is a choice of some individuals and there is a rumor that as many as nine transgender children (some adult children) died by suicide or attempted suicide the night Donald Trump was elected President.

The rumor debunking site Snopes "were unable to substantiate that any transgender children attempted or [died by] suicide on the night of 8 November 2016 in reaction to the election results or for another reason. No names, dates, locations, or other information along those lines have been presented, and those sharing versions of the rumor were not themselves parties to the purported tragedies. In the absence of any additional information, the claim remains unsubstantiated."
Posted by Loren Coleman at 10:14 PM

Protests went on for a second night, well into Thursday morning, in Portland, Oregon. Thousands of protesters went around the downtown core, around the bridges around the area, blocked freeways, and wound up by Pioneer Courthouse Square, a central gathering spot sometimes referred to as Portland's living room. It's a central transportation connection, and there's a Starbucks, and across the street is the downtown Macy's store.
http://www.kptv.com/story/33673710/post-election-protesters-gather-in-downtown-portland

This morning, Macy's announced it was going to close several stores around the country, including one in Douglaston, NY (part of Queens,NYC) and San Francisco, as well as the one in downtown Portland mentioned above and one in Salem, Oregon, in the Lancaster Mall. The downtown was the flagship of the Portland-based Meier & Frank chain, founded in 1857 and sold to May Department stores in 1966 (coincidentally, the year I was born). Federated stores (owners of Macy's bought May in 2005. The last day of the Meier & Frank brand was September 8, 2006, and on 9/9/06, the stores all became Macy's. (My ex-wife's mother used to work at the downtown store.) Of course, Macy's has been in the news several times this year.
http://www.kptv.com/story/33678757/macys-to-sell-close-downtown-portland-location

Lancaster Mall, opened in 1971, was the site of a kidnapping of a 17-year-old woman in 1977 and a 19-year-old woman in 1982. Also in 1982, in May, an ex-Salem police officer shot and killed two people at the mall, then killed himself in the parking lot.
https://en.wikipedia.org/wiki/Lancaster_Mall

Wednesday evening, a resident of Keizer, Oregon, fired off a cannon to celebrate Donald's Trump election victory. The man, and two other younger people (a man and a woman) who interfered with investigating officers, were all arrested. Keizer is a suburb of Salem, the state capitol, in Marion County.
http://www.kptv.com/story/33680415/police-cannon-fired-at-keizer-home-to-celebrate-trump-victory-trio-facing-charges

Speaking of cannons, a man killed a pregnant lady who a protective order against him, then shot two officers (one who died) before killing himself, suicide by cop or blue suicide, in Canonsburg, Pennsylvania. Canonsburg is in Washington County, outside of Pittsburgh.
http://www.kptv.com/story/33675722/suspect-in-pa-police-attack-dies-of-self-inflicted-gunshot-wound

And then in seemingly unrelated news, the National Toy Hall of Fame has inducted Dungeons and Dragons, the swing, and the Fisher Price Little People. Many people who voted for Donald Trump have long felt themselves to be 'little people' in our society, of course, and D & D has often been accused of being evil, in part, by evangelicals such as those who support Trump.
http://www.kptv.com/story/33678832/national-toy-hall-of-fame-announces-2016-inductees

The predator culture of Trump and his minions is upon us. Wtf is he doing in there! 87

This is blatant twilight language. THE STAGED CIVIL WAR II has begun. Thanks Russia.

25 protesters arrested in Portland, Oregon. 3 of them are 27 years old, a twilight number. One was named Zola, which links to both writer Emile Zola (whose death had controversial and conspiratorial overtones) and the South African runner Zola Budd, who had the infamous tripping incident in the 1984 Olympics with Oregon-connected runner Mary Decker. Budd finished in 8:48, the minutes are an anagram of 84, and there was a 48-year old man arrested in Portland. Budd had controversies both in getting British citizenship to run when South Africans were barred from the Games, as well as the mess in the Olympics itself.

Loren, I'm hoping the publicity you received earlier this fall will draw readers to
your book, The Copycat Effect. Maybe this meme contagion psy-op can be stopped before the damage can be done.