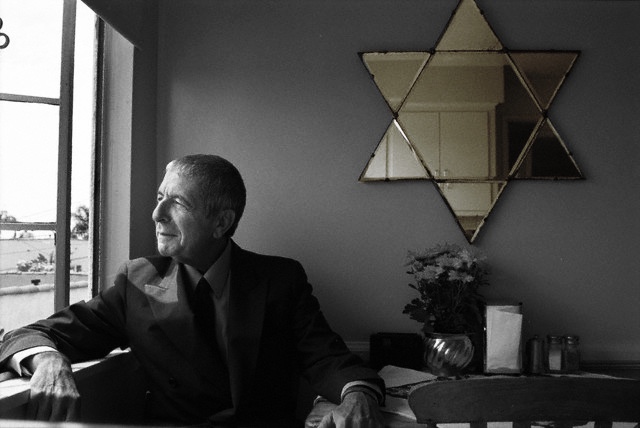 Leonard Norman Cohen, who was born on 21 September 1934, died on 7 November 2016, the day before Election Day in the USA, his adopted home. He was a Canadian singer, songwriter, poet and novelist. His work explored religion, politics, isolation, sexuality, and personal relationships. Did he also see the future? Cohen died on 7 November 2016 at the age of 82 at his home in Los Angeles. His death was not announced until 10 November. A memorial is planned to take place in Los Angeles at a future date. Cohen was survived by his two children and two grandchildren.

His son Adam stated, "My father passed away peacefully at his home in Los Angeles with the knowledge that he had completed what he felt was one of his greatest records ["You Want It Darker"]. He was writing up until his last moments with his unique brand of humour."

Tributes were paid by numerous stars and political figures.

In 1960, Leonard Cohen lived at Hydra, Greece, in an apartment he rented for fourteen dollars a month.

In 1994, Cohen retreated to the Mt. Baldy Zen Center near Los Angeles, beginning what became five years of seclusion at the center. In 1996, Cohen was ordained as a Rinzai Zen Buddhist monk and took the Dharma name Jikan, meaning "silence". He served as personal assistant to Kyozan Joshu Sasaki Roshi.

Cohen was described as a Sabbath-observant Jew in an article in The New York Times:

"Mr. Cohen keeps the Sabbath even while on tour and performed for Israeli troops during the 1973 Arab-Israeli war. So how does he square that faith with his continued practice of Zen? 'Allen Ginsberg asked me the same question many years ago,' he said. 'Well, for one thing, in the tradition of Zen that I've practiced, there is no prayerful worship and there is no affirmation of a deity. So theologically there is no challenge to any Jewish belief.'"

Cohen had a brief phase around 1970 of being interested in Scientology. As mentioned above, Cohen was involved with Buddhism beginning in the 1970s and was ordained a Buddhist monk in 1996; however, he continued to consider himself Jewish: "I'm not looking for a new religion. I'm quite happy with the old one, with Judaism."

*********************
Contributor RS adds these insights:
Leonard Cohen's last novel Beautiful Losers had some interesting things to note especially with the story ending as the main character is being chased down in a man hunt as alleged terrorist but this man is given a ride by a woman who went by the name of, are you ready? Isis.
Cohen wrote this in 1966.
In 1992, Cohen wrote a song called The Future. Just read the lyrics. With the timing of his passing and these words, the lyrics can easily be used a description of the United States.
I've seen the nations rise and fall
I've heard their stories, heard them all
but love's the only engine of survival
Your servant here, he has been told
to say it clear, to say it cold:
It's over, it ain't going
any further
And now the wheels of heaven stop
you feel the devil's riding crop
Get ready for the future:
it is murder
Things are going to slide ...
There'll be the breaking of the ancient
western code
Your private life will suddenly explode
There'll be phantoms
There'll be fires on the road
and the white man dancing
You'll see a woman
hanging upside down
her features covered by her fallen gown
and all the lousy little poets
coming round
tryin' to sound like Charlie Manson
and the white man dancin'
Give me back the Berlin wall
Give me Stalin and St Paul
Give me Christ
or give me Hiroshima
Destroy another fetus now
We don't like children anyhow
I've seen the future, baby:
it is murder
Things are going to slide ...
When they said REPENT REPENT ...
*******
Thanks to RS for his sharing of the above material. Some observations...
In 1992, Cohen released The Future, which urges (often in terms of biblical prophecy) perseverance, reformation, and hope in the face of grim prospects. Three tracks from the album – "Waiting for the Miracle", "The Future" and "Anthem" – were featured in the movie Natural Born Killers, which also promoted Cohen's work to a new generation of US listeners.
The announcement of Leonard Cohen's death from his family was noted by the media on 10 November 2016. 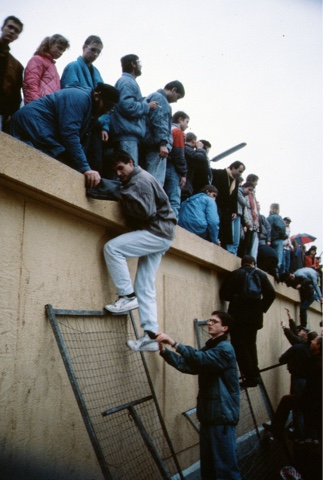 The Berlin Wall, January 1990.
The fall of the Berlin Wall (Mauerfall) began the evening of 9 November 1989 and continued over the following days and weeks, with people nicknamed Mauerspechte (wall woodpeckers) using various tools to chip off souvenirs, demolishing lengthy parts in the process, and creating several unofficial border crossings.
The prophecies in The Future, mention of the Berlin Wall, the anniversary of its fall, the 2016 Election, and Cohen's day of passing all feel strangely interwoven. ~ Loren Coleman 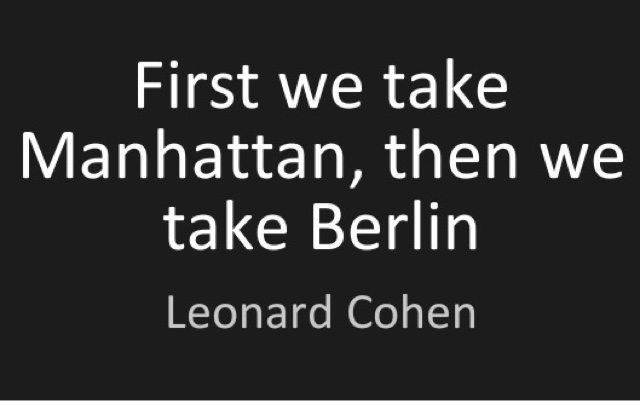 Posted by Loren Coleman at 4:46 AM