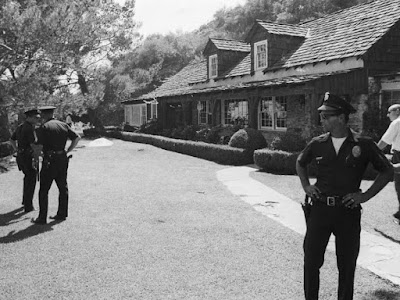 The crime scene at 10500 Cielo Drive, where Sharon Tate and others were found dead in 1969. 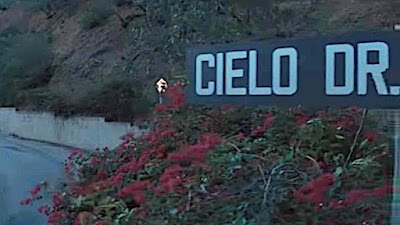 One long establishing shot in Once Upon A Time In Hollywood prominently features a street sign reading Cielo Drive, which is the street on which Roman Polanski and Sharon Tate's home was located. It serves as a chilling precursor of the shocking murders discovered there on August 9, 1969.

Roman Polanski was in London working on a movie, The Day of the Dolphin (produced by Joseph E. Levine). "The film version was originally going to be directed by Roman Polanski for United Artists in 1969, with Polanski writing the script. However, while Polanski was in London, England, looking for filming locations in August 1969, his pregnant wife, the actress Sharon Tate, was murdered in their Beverly Hills home by disciples of Charles Manson. Polanski returned to the United States and abandoned the project." Source.

The movie The Day of the Dophin was inspired by the work of John C. Lilly, who works for the government (the CIA?) to communicate with dolphins. In the film, after the dolphins are kidnapped from the Lilly character (played by George C. Scott), an investigation by an undercover government agent for hire, Curtis Mahoney (Paul Sorvino), reveals that the Institute is planning to further train the dolphins to carry out a political assassination by having them place a magnetic limpet mine on the hull of the yacht of the President of the United States.

Dr John Cunningham Lilly (January 6, 1915 – September 30, 2001) was an American physician, neuroscientist, psychoanalyst, psychonaut, philosopher, writer and inventor. He was a member of a generation of counterculture scientists and thinkers that included Ram Dass, Werner Erhard and Timothy Leary, all frequent visitors to the Lilly home. He often stirred controversy, especially among mainstream scientists. Lilly gained renown in the 1950s after developing the isolation tank.

It is generally acknowledged that at least one of Lilly's dolphins died by suicide. Source. 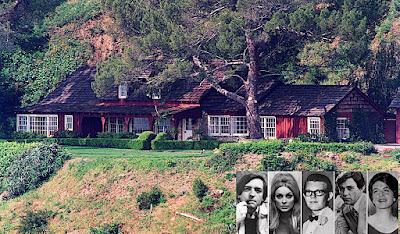 One of the Manson Family killers was Tex Watson. Another was Susan Atkins. According to group member Atkins, the Family believed Manson was a manifestation of Jesus and that his prophecies of an imminent, apocalyptic race war were real.

It turns out that today's mass shooting in Texas also involved a warped racial motive. 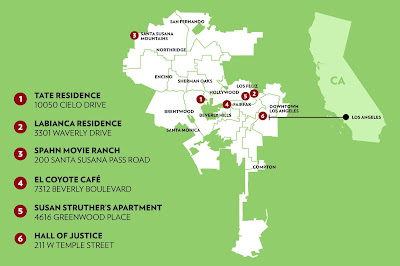 On August 3, 2019, "Cielo" is thrust into the news again. At the Cielo Vista Mall in El Paso, Texas, an active shooter, using a long gun, shot and killed multiple victims, including young children. Multiple people were shot and killed at the Walmart, in the parking lot, and at nearby mall on Saturday afternoon. Twenty-two victims were taken to area hospitals. As of Saturday night, August 3, 2019, the death toll is stated to be 20 dead, and 26 injured, as of 9:00 PM Eastern. 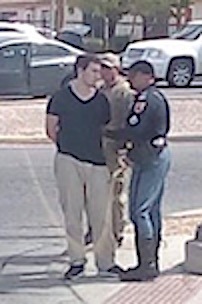 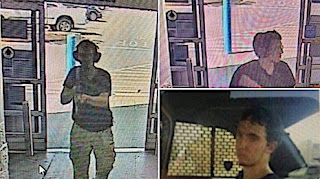 A 21-year-old suspect is in custody. El Paso Walmart gunman reportedly identified as 21-year-old Patrick Crusius. Social media sources are identifying him as a white supremacist, Trump supporter, who shot and killed 18+ people today at a Walmart in El Paso, and who was handcuffed peacefully & alive. He has posted a manifesto stating he was against "race mixing." 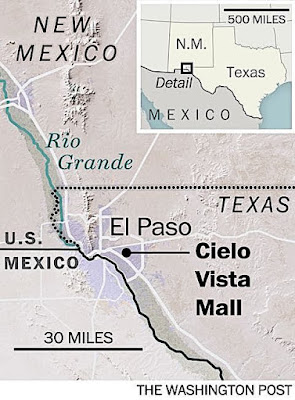 The Cielo Vista Mall is a shopping mall in El Paso, Texas, located on El Paso's east side, at Interstate 10 and Hawkins Blvd., and features five anchor stores operating under four brand names, and 134 specialty stores. Playing at the Cinemark Cielo Vista Mall 14, Once Upon A Time In Hollywood at 3:30pm, 7:10pm, 10:45pm, today.

The meaning of the name “Cielo” is "sky," or infrequently, “heaven.” It is moved from Spanish to English, in usage.

10050 Cielo Drive is the street address of a former luxury home in Benedict Canyon, a part of Beverly Crest, north of Beverly Hills, California, where the Charles Manson "family" committed the Tate murders in 1969.

The residence had been occupied by various famous Hollywood and music industry figures. In 1994, the house was demolished, a new house was constructed on the site, and the street address was changed to 10066 Cielo Drive.

The original house was designed by Robert Byrd in 1942 and completed in 1944 for French actress Michèle Morgan. It was extremely similar, but not exactly identical, to the house which sat on its own plateau directly below 10050, 10048 Cielo Drive, which was often called the Twin House. They were originally built on land called The Bedrock Properties and were built at the same time.

The French country-style structure was located on 3 acres (1.2 ha) a private drive on Cielo Drive in Benedict Canyon, an area west of Hollywood in the Santa Monica Mountains that overlooks Beverly Hills and Bel Air. The hillside structure faced east and featured stone fireplaces, beamed ceilings, paned windows, a loft above the living room, a swimming pool and a guest house, and was surrounded by thick pine and flowering cherry trees.

Michèle Morgan, French actress for RKO Radio Pictures, had architect Robert Byrd design and J. F. Wadkins build the luxury home resembling an early 19th-century European style farmhouse. The house was completed in 1944, with an address of 10050 Cielo Drive. Beverly Hills, California. By the end of World War II, Morgan had returned to France and in 1946 Lillian Gish moved in with her mother while filming Duel in the Sun (1946).

Rudolph Altobelli (1929-2011), a music and film industry talent manager, bought the house for $86,000 in the early 1960s (equivalent to US$720,000 in 2018) and often rented it out. Residents included Cary Grant and Dyan Cannon (it was their honeymoon nest in 1965), Henry Fonda, George Chakiris, Mark Lindsay, Paul Revere & the Raiders, Samantha Eggar, and Olivia Hussey. Charles Manson visited the house in late 1968, when it was occupied (from May 1966 to Jan. 1969) by couple Terry Melcher (the son of actress Doris Day) and Candice Bergen with roommate/talent-manager Roger Hart. The couple split in early 1969, with Melcher relocating to Malibu.

In February 1969, Roman Polanski and his wife Sharon Tate began renting the home from Altobelli. On August 8/9, 1969, the home became the scene of the murders of Tate, Wojciech Frykowski, Abigail Folger, Jay Sebring, and Steven Parent at the hands of the Manson "Family".  William Garretson, Altobelli's caretaker and an acquaintance of Parent, lived in the guest house behind the main house and was unaware of the murders until the next morning, when he was taken into custody by police officers who had arrived at the scene. He was later cleared of all charges.

Altobelli moved into the house just three weeks after the murders and resided there for the next 20 years. During an interview on ABC's show 20/20, he said that while living there, he felt "safe, secure, loved and beauty." He sold the property for $1.6 million in 1989 (equivalent to $3.2 million in 2018).

The final resident of the original house was the musician Trent Reznor of Nine Inch Nails. Reznor began renting the house in 1992 and set up a recording studio there. This studio, dubbed "Pig" (sometimes called "Le Pig") in a reference to murderer Susan Atkins' writing "Pig" in Tate's blood on the front door of the house, was the site of recording sessions for most of the Nine Inch Nails album The Downward Spiral (1994). Reznor moved out of the house in December 1993, later explaining "there was too much history in that house for me to handle."

Reznor made a statement about working in the Tate house during a 1997 interview with Rolling Stone:


“ While I was working on Downward Spiral, I was living in the house where Sharon Tate was killed. Then one day I met her sister. It was a random thing, just a brief encounter. And she said: "Are you exploiting my sister's death by living in her house?" For the first time the whole thing kind of slapped me in the face. I said, "No, it's just sort of my own interest in American folklore. I'm in this place where a weird part of history occurred." I guess it never really struck me before, but it did then. She lost her sister from a senseless, ignorant situation that I don't want to support. When she was talking to me, I realized for the first time, "What if it was my sister?" I thought, "F**k Charlie Manson." I don't want to be looked at as a guy who supports serial-killer bulls**t." I went home and cried that night. It made me see there's another side to things, you know? It's one thing to go around with your d**k swinging in the wind, acting like it doesn't matter. But when you understand the repercussions that are felt ... that's what sobered me up: realizing that what balances out the appeal of the lawlessness and the lack of morality and that whole thing is the other end of it, the victims who don't deserve that. ”

Altobelli, who lived there from 1969 (3 weeks after murders) to 1989, demolished the house in 1994 and built a replacement home called Villa Bella. The replacement home has a new street address of 10066 Cielo Drive. The owner of the property as of 2013 is Hollywood producer Jeff Franklin. The new property does not resemble the residence in which the Tate murders occurred.
Posted by Loren Coleman at 5:32 PM

Email ThisBlogThis!Share to TwitterShare to FacebookShare to Pinterest
Labels: Charles Manson, Cielo Vista Mall, John Lilly, Once Upon A Time In Hollywood, Patrick Crusius, Roman Polanski, Sharon Tate, The Day of the Dolphin