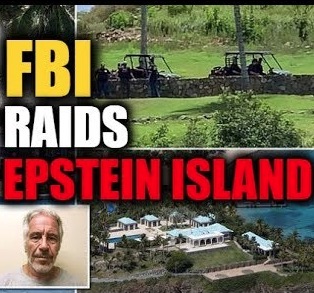 On the same day Jeffrey Epstein was arrested on arrival at a New Jersey airport on sex trafficking charges, federal agents bashed in the door of his $77 million Manhattan mansion and seized evidence to aid in his prosecution. But the multimillionaire’s Virgin Islands hideaway, where the wealthy hedge fund manager allegedly trafficked girls for sex and entertained politicians, businessmen and scientists, seemingly remained untouched by the law.

FBI agents — accompanied by Customs personnel, local police and New York City officers, according to a Virgin Islands source — fanned out in golf carts across Epstein’s estate on Little St. James Island. They scooped up evidence just two days after Epstein was found dead in his jail cell of an apparent suicide while in federal custody in Manhattan. 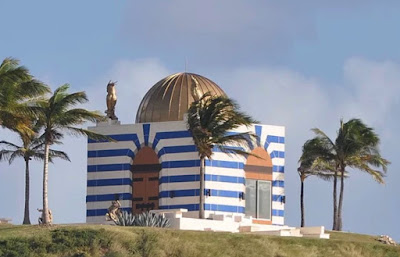 There will be many mysteries to discuss for conspiracy theorists, political pundits, and alternative media journalists in the coming weeks in the wake of the 8/10/2019 death of Jeffrey Epstein. But one riddle that stands out is the twilight meaning to be found in Epstein's enigmatic "temple." 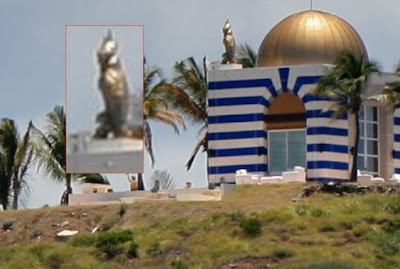 One item Epstein left behind that defies explanation, thus far, is his mysterious blue-striped temple. Those who have investigated the structure found that while it previously featured a gold dome, it flew off in 2017 when the hurricanes Irma and Maria devastated the region. 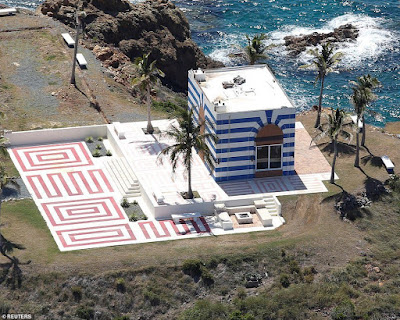 The blue-striped structure sits on a lookout point on the southeastern edge of Little St. James Island, which Epstein purchased in 1998 for $7.95 million. The building is surrounded by an expansive terrace painted bright white with red shapes.

The base is painted with broad, vivid blue horizontal stripes, and supports a large, golden dome. The entrance consists of an arched, seemingly wooden door equipped with black metal hardware. The sides appear to be cut with large windows, including a full-length one in the rear. The front is flanked by statues painted in gold; one of them appears to be the trident-wielding Poseidon, the Greek god of the sea, while two others look like birds perched on the corners of the roof. It is surrounded by a line of palm trees and a terrace with a labyrinth motif. Finally, the exterior seems to incorporate an optical illusion, to create the impression that the exterior windows and door are set within carved flanges. Source.

Rumors abound that it is a gym, a piano room, or a sex slave hideaway.

People have attempted to figure out what the overall reason for the "temple structure" is. Since Epstein was Jewish, that may have been a clue. But it is unlike any Jewish temple. 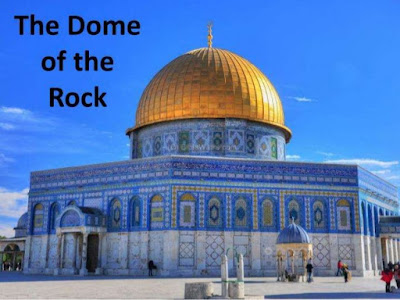 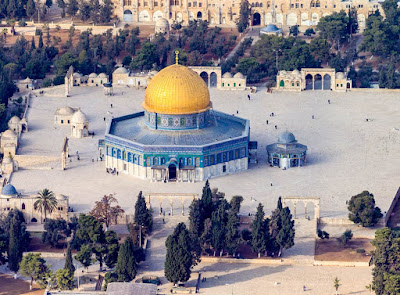 In many ways, the "domed temple" was like a mosque, similar to the Dome of the Rock, the Islamic shrine located on the Temple Mount in the City of Jerusalem. The cubic base and dome seem to refer this to Islamic architecture, but figures holding tridents, appearing to be Poseidon would be a form that is strange for a mosque.

Domes are found worldwide, of course. In the new film Once Upon A Time In Hollywood, a scene includes the famed Cinerama dome, designed by Pierre Cabrol and R. Buckminster Fuller, where the dome appears blue at night. 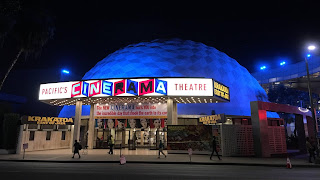 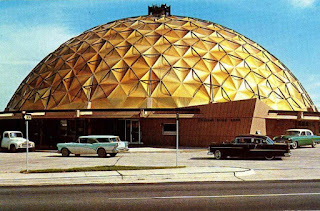 Neither of these domes-as-buildings are anything like Epstein's temple.

Research by online theorists have found that the Little St. James Island's structure compares favorably with the bath houses found in Aleppo, Syria, which are painted like mosques. 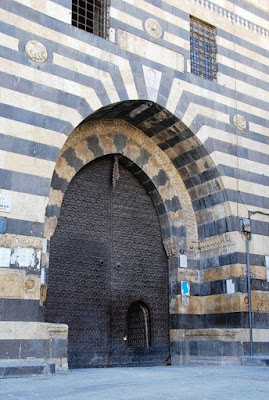 An Allepo mosque - or is it another bath house? 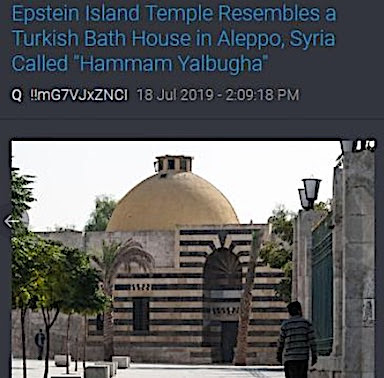 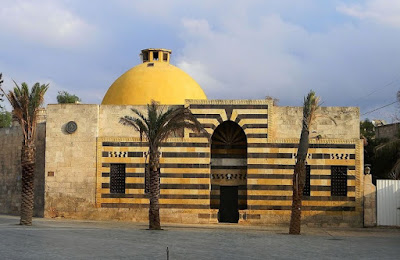 Footage was obtained of the use of underaged females (not shown below) in these bath houses. 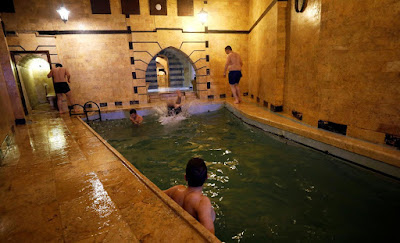 The exterior painting is mirrored inside. 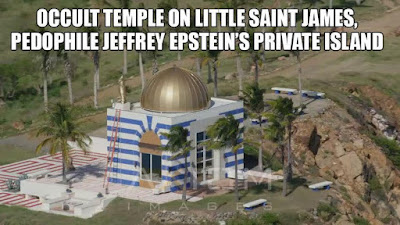 The Epstein "Temple" has become a meme.

His death extends his mysterious legacy.

1) The Saint James Church Massacre, in Cape Town, South Africa, in 1993. 11 people were killed, including 4 Russian sailors visiting as part of a church outreach program. One of the gunman later participated in two robberies of cash vans (like armored trucks with money), while an armed parishioner who fired back and wounded a gunman became involved in the anti-gun control movement.

2) St. James Day Battle, August 4th and 5th, *1666*, between English and Dutch forces. Simultaneously happening were the Great Fire and Great Plague of London. (Notice the Number of the Beast in the year.) One of the Dutch Admirals, Cornelis Tromp, was involved in politics later as a supporter of the House of Orange. (You'll notice the similarity of Donald Trump and references to his hair and looks as being orange.) Accusations of negligence followed; his brother-in-law planned a coup but fled the country. A supporter tried to stab a political rival of Tromp's, and another rival was later killed; Tromp was said to be involved. 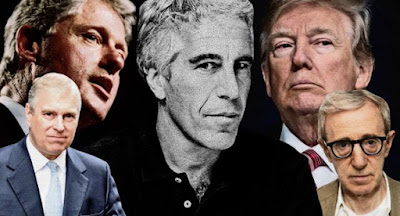 Jeffrey Edward Epstein was born on January 20, 1953, in the New York City borough of Brooklyn, to Jewish parents Pauline (née Stolofsky, 1918–2004) and Seymour G. Epstein (1916–1991). His parents were married in 1952, shortly before his birth. Pauline worked as a school aide and was a homemaker. Seymour Epstein worked for the New York City Department of Parks and Recreation as a groundskeeper and gardener. Jeffrey Epstein was the older of two siblings. Epstein and his brother Mark grew up in the working-class neighborhood of Sea Gate, Coney Island, Brooklyn. 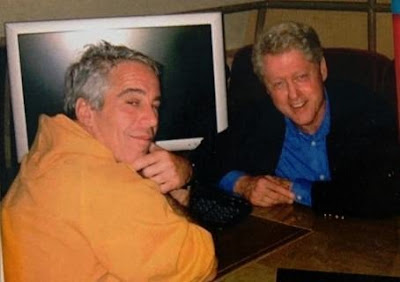 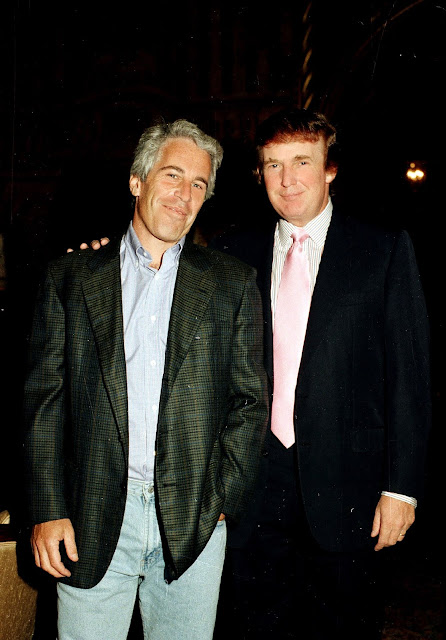 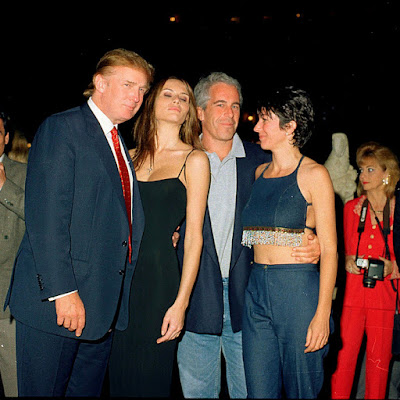 We have been here before. Often. What happens when a well-connected person dies by suicide? 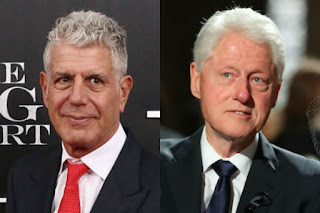 Fayette Factor?
Epstein attended local public schools, first Public School 188 and then Mark Twain Junior High School nearby. In 1967, Epstein attended the National Music Camp at the Interlochen Center for the Arts. He was a talented musician who learned to play the piano when he was five. He graduated in 1969 from Lafayette High School at age 16 having skipped two grades. Later that year, he attended classes at Cooper Union until he changed colleges in 1971. From September 1971, he attended the Courant Institute of Mathematical Sciences at New York University, but left without receiving a degree in June 1974.

Intriguing we should find the Fayette Factor in Epstein's story.


Dalton Connection?
Epstein started working after the summer of 1974 as a physics and mathematics teacher at the Dalton School in the Upper East Side of Manhattan. Epstein taught at the exclusive private school from the fall of 1974 until he was dismissed in June 1976. While teaching at the school, Epstein became acquainted with Alan Greenberg, the chief executive officer of Bear Stearns, whose son and daughter were going to the school. Greenberg's daughter, Lynne Koeppel, pointed to a parent teacher conference where Epstein influenced another Dalton parent into advocating for him to Greenberg. Greenberg, impressed with Epstein's intelligence and drive for financial success, offered him a job at Bear Stearns.

Then we turn around, and the Dalton name (= "living in the valley") springs up in Epstein's narrative too.


Intelligence Agent?
Epstein stated to some people [in the early 1980s] that he was an intelligence agent. Whether this statement was truthful or in jest is not clear. During the 1980s, Epstein possessed an Austrian passport that had his photo but a false name. The passport showed his place of residence in Saudi Arabia. U.S. Florida District Attorney Alexander Acosta who handled Epstein's criminal case in 2008 stated that he had been told that Epstein "belonged to intelligence", was "above his pay grade" and to "leave it alone".
During this period, one of Epstein's clients was the Saudi Arabian businessman Adnan Khashoggi, who was the middleman in transferring American weapons from Israel to Iran, as part of the Iran-Contra Affair in the 1980s. Khashoggi was one of several defense contractors that he knew. In the mid-1980s, Epstein traveled multiple times between the United States, Europe, and the Middle East. While in London, Epstein met Steven Hoffenberg. They had been introduced through Douglas Leese, a defense contractor, and John Mitchell, the former US Attorney General.

Are we surprised that some people are seriously speculating that Epstein is still alive and his body has been spirited away to a Mideastern country? By Mossad?


Suicide?
Epstein died of an apparent suicide by hanging on August 10, 2019, while imprisoned at the Metropolitan Correctional Center in New York City. Prison officials found his body in his cell at 6:30 a.m. Three weeks previously he had been found unconscious in his jail cell with injuries to his neck. After that incident, he was placed on suicide watch. However, he was not on suicide watch at the time of his death, leading some prison experts to express bafflement and shock that he would be taken off suicide watch at such a time. U.S Attorney General William Barr ordered an investigation by the Department of Justice Inspector General in addition to the FBI investigation, saying he was "appalled" by Epstein's death in federal custody. Epstein was 66 years old.

More questions than answers = a storm of conspiracy theories.
Posted by Loren Coleman at 9:10 PM

The King Of The Real said...