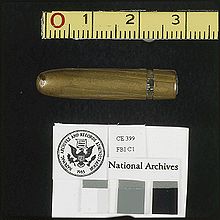 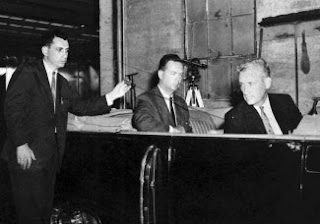 Here is Arlen Specter (left) as a Warren Commission assistant counsel,
during the recreation of the JFK assassination scenario he promoted.

I want to use this moment to say goodbye to Arlen Specter.

One should not be so shallow as to blame a massive coverup like the investigation of the JFK assassination on one person, but the metaphor afforded by the actions of Arlen Specter are worth noting.

Lest we forget, Arlen Specter has been involved in conspiracies for a long time, and Lee Harvey Oswald was always on his mind. Don't take my word for this.


First, for my youthful readers, guess who invented the "Magic Bullet Theory"?

The Magic Bullet Theory was introduced by the Warren Commission (November 29, 1963 - September 24, 1964) to explain how three shots supposedly made by Lee Harvey Oswald resulted in the assassination of the United States President John F. Kennedy. 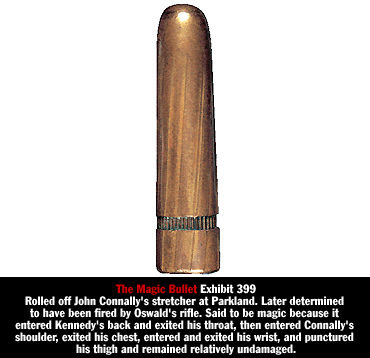 The theory is credited to Warren Commission staffer Arlen Specter. Specter proposed that a single bullet, known as "Warren Commission Exhibit 399" (also labeled as "CE399"), caused all of the non-fatal wounds in both President Kennedy and Texas Governor John Connally on November 22, 1963, at Dealey Plaza, btw, the site of the first Masonic temple in Dallas, Texas. 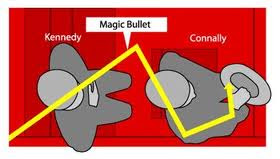 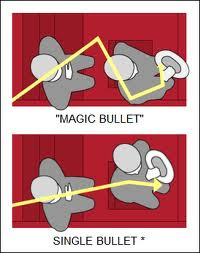 The fatal head wound to JFK was caused by a bullet other than this alleged "Magic Bullet."

Arlen's checked history and reputation as "Snarlin' Arlen," is well-documented. It appears Wikipedia has edited out the "reputation" material.

Here's what it said:

Over Specter's long and notable legislative career, numerous sources from within the U.S. Senate reported that they found it difficult to work with him. For example, when Specter was still a Republican, Senate Majority Leader Trent Lott needed him to sign off on an appropriations bill. However, Specter refused to sign the document unless Lott flew out to Pennsylvania to attend two fund raisers for him. Lott agreed, but this incident only contributed to reputation which earned Specter the nickname "Snarlin' Arlen.".[*] Similarly, Specter gained a reputation among U.S. Embassy staff for condescending treatment and unreasonable demands such as organizing squash tournaments on his behalf.
* "John J. Miller on Arlen Specter on National Review Online". Old.nationalreview.com. http://old.nationalreview.com/flashback/miller200403260926.asp. Retrieved June 13, 2010. Note 56.
* Monday, April 26, 2004 12:01 A.M. EDT (April 26, 2004). "John Fund on the Trail - WSJ.com". Opinionjournal.com. http://www.opinionjournal.com/diary/?id=110005003. Retrieved June 13, 2010.

Behind the scenes, of course, Specter did always have the Warren Commission on his mind.

On April 28, 2009, as the media swarmed and tried to interview Senator Arlen Specter about his jump from the Republican Party to the Democratic Party, he is reported to have said, "I don't think Lee Harvey Oswald had this big a crowd trailing him."

What a curious thing to say.

Well, it wasn't really too weird for Arlen Specter to say what he said, after all.

Years later after the Warren Commission, Specter was the initial attorney of Ira Einhorn, the "unicorn killer," a one-time friend of Abbie Hoffman and Jerry Rubin. Einhorn was a big player in the environmental movement; just ask him for he claimed he invented "Earth Day." Einhorn was arrested for killing Holly Maddux and was at first represented by Arlen Specter. Einhorn's bail was not paid by him but by Barbara Bronfman, a member of the family who owns Seagram's.

You are too polite to say it so I will just add and good riddance.

We've managed to exorcise A. Specter from the body politic.

“When an impure spirit comes out of a person, it goes through arid places seeking rest and does not find it. Then it says, ‘I will return to the house I left.’ When it arrives, it finds the house unoccupied, swept clean and put in order. Then it goes and takes with it seven other spirits more wicked than itself, and they go in and live there. And the final condition of that person is worse than the first. That is how it will be with this wicked generation.”

Re: Twilight Language - I think the inclusion of the 'magic bullet' theory was just an excuse to put the ritual aspect into plain sight.

In opposition to the recent COWAN story we have , still alive, Jackie's long-time partner Maurice TEMPELSMAN who was involved with the Kennedy administration in the Congo crisis. via Adlai Stevenson.

Anyhow considering the Masonic connexion to do with JFK's murder we have a Cowan projected onto the public consciousness on the [almost] anniversary of the assassination.

Arlen never stopped the amazing comments. Before he left he found time to say:

“She was a total charmer, very friendly,” Specter writes. “The few things she said were intelligent.” He doesn’t mention what they were, maybe because he was distracted.

“We were sitting virtually knee to knee in the cramped bus,” he writes. "She radiated sensuality. Her skirt rode above her knees — not exactly short, but close.”

Those were his quotes about Sarah Palin [!] from his autobiography with the interesting title, "Life Among Cannibals", as quoted in New York Magazine Arlen Specter on Palin: ‘She Radiated Sensuality’.


What did Arlen Specter, Ira Einhorn, Abbie Hoffman, Jerry Rubin, and Barbara Bronfman all have in common? Hint: they weren't all Masons.

This man shows how far one can rise from obscurity if you're willing to sell your soul.
No worries though, mates....there's another one like him lurking in all corners of politics and business.

i remember from my school days at Brandeis University in1970's my student adviser's words that when he was growing up that his parents used the term "‘goyishe kup,’" meaning that the "Non-Jews are Stupid". also i recall him mentioning that he thought he east european father was funny. when i asked him why he thought that he replied that when his father heard that jfk was assissinated he stated that the jews must have assassinated jfk. when he asked him why he thought that his father replied because the jews made the best assissins.
I learned that of "GOYISHE KUP" means that the "Cattle are STUPID".I agree with the Jewish saying that American "GOYISHE KUP" are indeed" Stupid" as they believe that Muslem Kids who were unable to Fly a Cessna plane took it upon themselves to FLY a Boeing 767 & outwitted the US Military & Civilian authorities. The "Jewish Lightning Insurance Scam" of the 1960's is still alive and well has been put to use by Larry Silverstein in putting 15 million cash down and comming out with 7 billion dollars for buidings where it would have cost a billion dollars to remove the asbestos The Americans believe that they decide who is elected President or for that that actual VOTE is really counted in deciding who represents them in the White House and congress.

Yeh I agree that the AmericanNon-Jews are indeed "GOYISHE KUP" or "STUPID CATTLE"!

The Iowa caucus is only a few days away and the nation's attention will be directed to the results, which signify the beginning of the U.S. presidential race. But does anyone watch who tallies the results of the Iowa caucus?

In Bill Clinton's impeachment hearing Specter cited Scottish law to vote "not proven", thus freeing him from having to vote either guilty or not guilty.

Apparently USA law does not apply to impeachment proceedings.

Ira Einhorn was friends with Andrija Puharich- Andrija credited Ira's "imagination" in helping to formulate Andrija's book on Uri Geller. In that book Uri supposedly was in contact with an alien intelligence that identified itself as 'Spectra'...