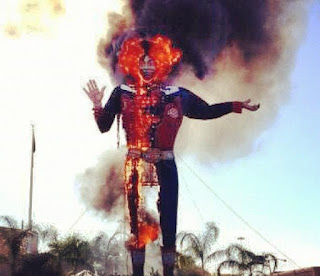 I was in Dallas, Texas, on October 19,  2012, in transit to a conference in Jefferson. By coincidence, Big Tex caught on fire. I'm not able to pen too much from the road.

This morning in Dallas, at the State Fair of Texas, the iconic "Big Tex" burned up.
When I saw the photos of the fire, I was reminded of the ritual sacrifice in the 1973 film The Wicker Man.  Interestingly, this year, the Scottish band Texas headlined at Scotland's Wickerman Festival, where each year a burning of a wicker man concludes festivities.  The festival kicked off this summer on July 20, the day James Holmes shot up the theater in Aurora.  (Another Holmes, Emily Holmes, appeared in the crappy 2006 remake of The Wicker Man.)  Holmes means "from the river island."  The setting of The Wicker Man is on an island, and the original film's production was based at Newton Stewart on the River Cree.
Holmes, fairs, and  death also intersect in the story of one of America's first known serial killers, Dr. Henry Howard Holmes.  This Holmes designed and built a deathtrap hotel, and he lured victims to his hotel from the 1893 Chicago World's Fair.
Maury Terry's belief, as outlined in his book The Ultimate Evil, that David Berkowitz was associated with a cult and that the Son of Sam murders were ritual sacrifices, also comes to mind.  In the famous letter sent to Daily News columnist Jimmy Breslin, the .44 Caliber Killer references "Wicked King Wicker."

Posted by Loren Coleman at 7:00 AM

Is it known how 'Big Tex' caught on fire? Looking at the pictures at the link Big Tex really does look eerily like the Wicker Man. Makes me wonder if hidden forces didn't intentionally set fire to it, perhaps something to do with the upcoming presidential election? Interesting too is that there's the Holmes-Aurora-Scottish group 'Texas'.

Reading about the Wicker Man movie, apparently it's a trilogy: In 2011, a spiritual sequel entitled The Wicker Tree and the next film, The Wrath of the Gods. There are still plenty of people that believe in Paganism, for instance I imagine the Left Hand Path in mystical circles, which often has to do with the aspects of Chaos. So there could be real hidden message in these trilogys...maybe?

I always liked anything that Christopher Lee appeared in, like all the Hammer horror films especially. I feel his version of the Wicker Man was more authentic to the one Nicholas Cage was in.

Hope you had a good time at the conference. Must have been interesting, I bet.

Another Tex, Charles Manson associate Charles "Tex" Watson, is now in the news:

In the book The Ultimate Evil that I mentioned in the post, Maury Terry makes a case for both the Son of Sam murders and the Manson family slayings being occult hits ordered by the same cult. There is a significant name game sync here, also. Watson ties back to Holmes through Arthur Conan Doyle's stories about the brilliant sleuth Sherlock Holmes and his assistant Dr. Watson. Anthony Shaffer, who wrote The Wicker Man, also wrote Sleuth. Round and round it goes...

The name game + news has me thinking of Texe Marrs, as ole' Curiosity rumbles round picking up pyramidical rock. The rock is classified as a Mugearite, named after rocks found in Mugeary, isle of Skye.

I keep reading that the fire started in his right foot - In the Austin American Statesman in the Oct. 20th, Saturday edition, in the Metro & State section - they havre a photo of Big Tex all wrapped up in a cloth wheeling him away from the state fair and I quote: "The covered remains of Big Tex are rolled away Friday ...."

It sounds like a funeral and the photo looks like a dead giant person would look when the medics cover their bodies and roll them away from the scene. I think the photo and the words are intentional.
It's a message to the initiates no doubt. "Right" being buried - who knows, Bill Bragg, is the voice of Big Tex, great name for someone from the big ol state of Texas, where everything is bigger, or was.

Friday morning Big Tex burned down in Dallas, Texas. Sunday night, an African American woman was set on fire in Winnsboro, Lousiana. This is ~325 miles directly east of the Big Tex. Notable.

I had a layover in Houston on my way to Minneapolis on Oct 18th.

Maybe it was the result of my wrath for offering/losing my favorite Pearl Jam cap before the altar of the TSA at George Bush Intl Airport :P

Small quibble from me but the Wicker Man remake wasn't all bad. It had some interesting elements and sequences, despite the unintentionally comedic bits. It definitely nailed the final sacrifice scene better than the original, especially in its intensity.

A town in England is going to burn a Lance Armstrong effigy. Another wicker man?