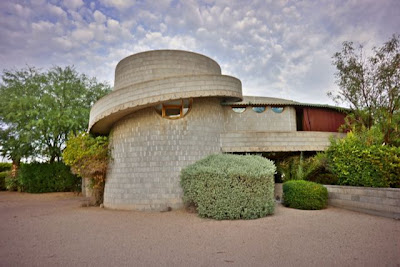 Update: The demolition of the house, designed by Frank Lloyd Wright for his son David, was pushed back a month at the eleventh hour by the City of Phoenix.

If you are a routine reader, you know several people have picked up on a "Phoenix" sync lately. Read here, here, here, here and several of the recent comments about Phoenix, red birds, and more, here.

Now news that has been flying under the radar is being revealed today in wire stories nationally. 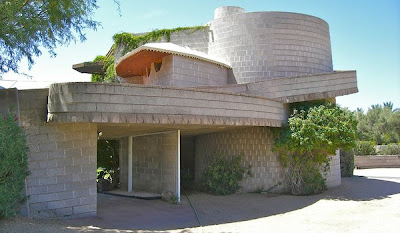 Yes, today is the day the above pictured FLW house may come down, according to the New York Times article about the possible destruction of this Phoenix masterpiece, entitled "Wright Masterwork Is Seen in a New Light: A Fight for Its Life."

Remarkably, this Phoenix-FLW is located in a neighborhood with another power name, Arcadia! Arcadia was the home of Pan!

Let's hope that calmer minds prevail, and the David & Gladys Wright House, or the David Wright House is saved. BTW, David and Gladys lived in the house until their deaths. David died in 1997 at 102; Gladys in 2008, at the age of 104.

The Phoenix lexilink has crashed with Frank Lloyd Wright sync! 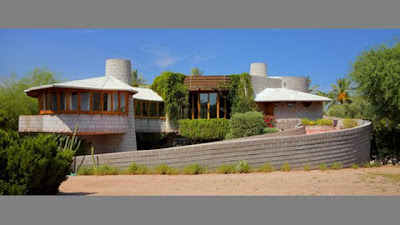 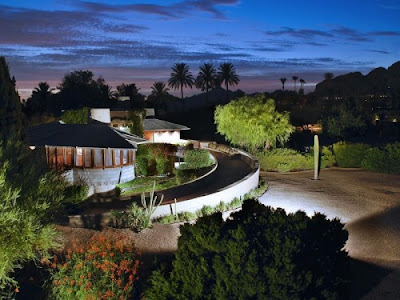 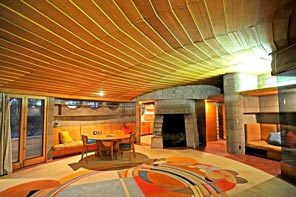 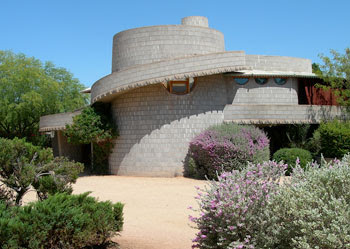 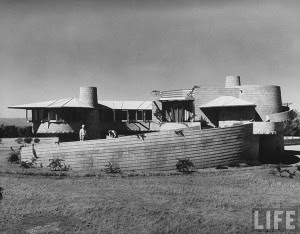 As a boy in Arkansas, when we would drive to St. Louis and visit my grandparents, we would stop in the Ozark town of Arcadia, Missouri. This was the home of my great-aunt Josephine Moffitt Reeve and her husband Robert Reeve. "Uncle Bob" was a neat guy. Always laid back and nice. I would sleep on the screened-in porch at their house on summer nights. Arcadia was a really nice little town there in Iron County.

He was aboard the Carpathia when the Titanic sank. He was a physician and helped a lot of the survivors. He was also a piano player and teacher and one of his students was the actor Vincent Price, a young student of his in St. Louis. My parents now own that same piano that Uncle Bob used to teach Vincent Price. Cool ,eh?

I also was a big fan of the show "Joan of Arcadia," a few years back. Spiritual themes and more. Great show!

" The last trams built and used in Brisbane were named "Phoenix" because they basically "rose from the ashes" of the Paddington depot fire."

Also the Arcadia is a cruise ship which is going to be leaving Southampton,England on the 5th Jan,2013 and terminate in Brisbane on the 25th Feb,2013,at the Portside Terminal were my son found the owl trinket and where the cinema is that we saw "Magical Mystery Tour" in this post-

" Exclusively for adults, Arcadia offers a relaxed pace, stylish surroundings and more than a hint of extravagance to P&O Cruises. Arcadia’s signature features such as her exterior glass-fronted lifts and expansive art collection, featuring no less than 3,000 works of art, create a sophisticated air. Take a stroll up to Sky Deck and, in addition to great views you’ll find The Orchid Bar and Orchid Restaurant, a Select Dining venue which offers immaculately presented Asian fusion dishes; a treat for the senses. In fact, foodies will be in their element on this ship, for Arcadia also features Arcadian Rhodes, an intimate and upmarket restaurant serving British fare with a modern twist, created by none other than Gary Rhodes. Arcadia has many a place to happily while away an hour or two; Caffè Vivo, The Piano Bar and The Rising Sun pub to name but a few. There are plenty of ways to keep active too, but the ultimate route to feeling great has to lie with a visit to Arcadia’s wonderful spa which includes a large hydrotherapy pool and a thermal suite complete with fragrant aromatic showers. By evening, you’ll find spellbinding shows in The Palladium theatre, a lively casino, Electra nightclub and The Globe, offering anything from comedy to live music. Indulgent to the core, this chic and modern ship blends some classic features with up‐to‐the‐minute facilities. As a child‐free ship Arcadia is the perfect place to pamper and restore.

The name Arcadia stems from Greek history. Arcadia was a mountainous and picturesque district of Greece inhabited by shepherds and beautiful young women. In poetic fantasy Arcadia was a pastoral paradise and the birthplace of Pan, the god of Flocks and Shepherds, who wandered the mountains playing his panpipes. Today it is commonly associated with contentment and rural happiness. "

Watching the video clip in your post Loren,truly bought home how Wright used curves as much as he could in the design of that house,which made me think of the movie "Temple Grandin"
and how in that movie (and in real life) Temple designed a cattle chute which was curvy like the ramp on that house of Wright's,because it placated the animals,and they wouldn't panic as much as they did in the normal cattle chutes.

I highly recommend this movie as well.
Check out the trailer-

Just after Duran Duran's popularity peaked in late 1984 and early 1985 ARCADIA formed, comprising of three Duran Duran members: Simon LeBon, Nick Rhodes & Roger Taylor. Arcadia released one album, platinum-selling So Red The Rose. It peaked at no.30 in the UK and no.23 in the US, and featured: UK & US Top 10 single 'Election Day'.All Music guide describe So Red The Rose as 'the best album Duran never made'. A plethora of acclaimed artists contributed to the album including: David Gilmour
(Pink Floyd),
Sting (backing vocalist on The Promise),
Herbie Hancock & Grace Jones (whose spoken word can be heard on 'The Flame' & 'Election Day').

And their song "The Flame"
here-

interesting lyrics in "The Flame" too;

Seems to be a lot of wolf imagery in their music clips.
Not surprising I suppose,since Duran Duran did have the hit song "Hungry Like The Wolf" -

Interesting too that there is a Gary Rhodes on the ship ARCADIA "... foodies will be in their element on this ship, for Arcadia also features Arcadian Rhodes, an intimate and upmarket restaurant serving British fare with a modern twist, created by none other than Gary Rhodes".
And a Nick Rhodes in the band ARCADIA
"...early 1985 ARCADIA formed, comprising of three Duran Duran members: Simon LeBon, Nick Rhodes & Roger Taylor".

Is the desert so overly populated that developers feel a need to tear down FLW's dreamscape in Arcadia to make room for whatever they have in mind? I hope it doesn't happen.

I forget what the word is that synchromystics use in the study of place names. But both names - Phoenix and especially the neighborhood called Arcadia - makes me wonder how they got their names -- especially Arcadia. (There was an article by Loren about Florida and its place names having to do with planets -- Venus and Jupiter).

Back in the 1980's I was intensely interested in anything Lynn Pickett and her co-author Clive Prince put out. I probably read their 'The Templar Revelations'. Their works always revolved around the most fascinating subjects. In
'Templar Revelations', as I had to refresh myself by googling, revolves around

Now I know that the Priory of Sion that was advanced by one named Pierre Plantard in the 1960's is considered today to be debunked. But be that as it may, my feeling is that when it comes to the secret societies and their hidden beliefs, we are in a landscape not of 'facts' per se, but of cults and hidden things and beliefs. With the little neighborhood of Arcadia, I can't but think there is a hidden history here how and why it got it's name, which is linked somehow to the Freemasons (and their belief in John the Baptist), Rosicrucians, and Knights Templar. This is my feeling. Same thing with the planetary names of some of the cities in Florida.

We have a flurry of phoenixes and birds lexilinks, and now a connection to Frank Lloyd Wright. (Wright, another plane name...the Wright brothers). And a link to Arcadia, which, on an arcane level, links to the non-fiction works of Michael Baigent, Richard Leigh, Henry Lincoln, i.e. their "Holy Blood Holy Grail" theories, that caused quite a sensation in the 1980's also.

These people - baigent, Leigh, Henry Lincoln, Lynn Picknett and Clive Prince, Elaine Paget, Christopher Knight, Sir Laurence Gardner, Erick Von Daniken, Margaret Starbird, and a whole slew of others, are now somehow mostly forgotten. But I still believe because we are dealing with the murky world of the hidden occult knowledge and some of their still existing cults that keep this knowledge hidden. If I'm making any sense in what I'm saying.

Real estate developers are the lowest form of life on earth, below even the stuff that grows on the surface of sewage treatment ponds.

I know firsthand of two historic and architecturally significant structures that were bulldozed to make way for a strip shopping center and a gray cement box office building.

Hopefully the Wright home survived for posterity. But as I've seen in the past -- oops, sorry, you're too late; it got demolished because we didn't get the desist order in time to stop the destruction.