It seems strange that a frequent focus today for the Weather Channel's broadcasts of their seemingly near-death assignment for Al Roker was at the ill-faithed named location of Point Pleasant, New Jersey. 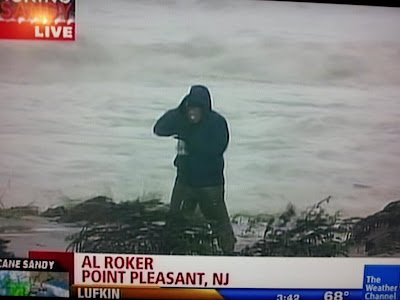 Yes, of course, the Mothman sightings were in Point Pleasant, West Virginia, not New Jersey. But the name game is the name game. 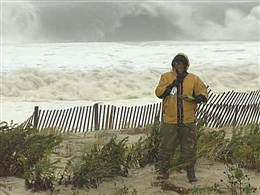 The New Jersey site served as the fictionalized version of the town for the setting of a short-lived 2005 television show, Point Pleasant. With shades of Twin Peaks, the melodrama began when a young girl named Christina washes up on the shore near Point Pleasant Beach, New Jersey during a violent storm.

During a violent storm.

Let's hope that Hurricane Sandy does not visit death upon any Point Pleasants, whether in New Jersey or West Virginia.

Another area of some attention has been Montauk Point, New York. Montauk Monster, anyone?
Posted by Loren Coleman at 5:50 PM

Well, as people start copying our "Friendship Cube Code" we can coin a term: "The Copy-Dog Effect".. for the synchronicity of Visual Binary communications and the significance of the Dog star: Sirius the visual binary star system 8 light years from earth... throughout all human history.

A lot going on sync-wise with Sandy. I wrote about it at my site. SOng titles, "Perfect Storm," I even link it to the Kent State massacre of 1970. http://www.reddirtreport.com/Story.aspx/24062

Dark Knight Rises strikes again as Gotham gets hit in the year of it's release?

" There's a storm coming, Mr. Wayne. You and your friends better batten down the hatches, because when it hits, you're all gonna wonder how you ever thought you could live so large and leave so little for the rest of us. "

Yes that batman line also sprang to mind when i first started hearing about the storm!

Did you catch the Claudene Christian story,