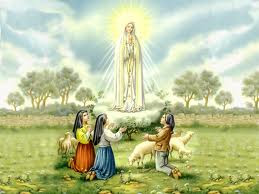 The final apparition at Fatima took place on October 13, 1917. In five years, the 100th anniversary will be celebrated. In the meantime, let's ponder this guest blog by T. Peter Park, which is related to that and October 13th events, plus one tied to a lexilink. (I've added some other incidents that have occurred on October 13ths, following Park's remarks.)


October 13: Ferrer, Fatima, and the "Twilight Language"
This Saturday, October 13, should interest students of the "Twilight Language" and "Name Game." October is coincidentally (or perhaps not so coincidentally) the anniversary of two notable incidents in the 20th century history of Catholicism versus anti-Catholicism in the Iberian peninsula: the execution of the Spanish rationalist educator Francisco Ferrer on October 13, 1909, and the so-called "solar miracle" of the Virgin Mary in Fatima, Portugal exactly eight years later, on October 13, 1917. 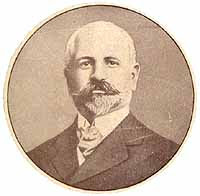 On October 13, 1909, the Spanish anarchist and secularist educator Francisco Ferrer Guardia (1859-1909) was executed by a Spanish military firing squad in Barcelona on flimsy evidence as the alleged instigator of the July 1909 Semana Tragica ("Tragic Week") Barcelona riots where mobs burned churches and convents in protest against a military expedition to Morocco, widely believed to be motivated by a wish to protect mines there owned by the Jesuits. Ferrer's execution touched off a world-wide storm of anti-Spanish and anti-Catholic protests, and provoked a cabinet crisis in Spain itself. From 1901 to 1906, Ferrer had run an anarchist and anti-religious "Escuela Moderna" in Barcelona that inspired the founding of many similar schools throughout Spain and abroad, and it was widely believed that a reactionary, intolerant Spanish Church and State had framed him up on account of his radical and rationalist ideas.
Liberals, rationalists, socialists, and anarchists throughout Europe and the Americas hailed Ferrer as a judicially murdered martyr for rational thought and intellectual liberty, while conservatives and Catholics saw him as a revolutionary conspirator justly condemned and punished for his incitements to violence. Cities and towns throughout
Continental Europe named streets or plazas in Ferrer's honor, general strikes protesting the execution brought Italian cities to a standstill for several days that October, and rationalists, socialists, and anarchists founded "Ferrer Schools" or "Modern Schools" in his honor in the United States and other countries. The future historian Will Durant was a teacher at the New York Ferrer School in 1910-1911, and met and married his wife and future collaborator when she was one of his students there! In Spain itself, the international protests led to a cabinet crisis, as Prime Minister Antonio Maura's Conservative government was harshly criticized by his Liberal opponents for needlessly provoking foreign opinion by authorizing Ferrer's execution. The international polarization of opinion over Ferrer and his conviction recalls the Dreyfus Affair in France just a few years earlier. Although almost forgotten today, the Ferrer case probably received more public world-wide attention than any other single incident concerned with the history of anarchism, at least until the Sacco-Vanzetti affair of 1921-1927. 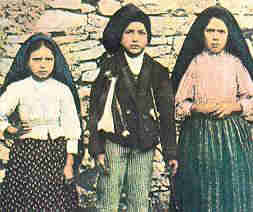 On October 13, 1917, a crowd of 70,000 pilgrims and curiosity-seekers gathered at the small Portuguese village of Fatima, where three peasant children had allegedly seen visions of the Virgin Mary on the 13th of every month for several months. While the three visionary children knelt, prayed, and chanted the Rosary as they had been doing on the 13th of each month, many people in the crowd reportedly saw the Sun "dance," spin, and change color for several minutes and then return to normal. Devout Catholics ever since have claimed the phenomenon as a miracle, while skeptics, and also liberal and middle-of-the-road Catholics unenthusiastic about apparitions and alleged modern miracles have interpreted it as a mass hallucination or unusual but quite natural atmospheric phenomenon. In the past few decades, some occult, "New Age," and Fortean writers have also seen the "dancing Sun" as a UFO! Since 1917, Fatima has become a major Catholic Marian shrine, rivaling Lourdes in popularity as a pilgrimage site, with "Our Lady of Fatima" as one of the most popular Virgin Mary devotions. Lourdes, Fatima, and Medjugorje in Croatia (formerly Yugoslavia) are probably the world's three most popular Marian pilgrimage shrines today.

Nobody to my knowledge has ever noted this coincidence of dates. Yet, it does seem an odd coincidence that the October 13 date, a few years apart, should have marked noteworthy episodes in the religion/irreligion conflict in the same part of Europe, in two neighboring countries. I have often wondered if it's just a mere meaningless coincidence, or if there might be some obscure connection after all. It's the sort of coincidence that easily inspires speculations about the "Twilight Language," about Carl Gustav Jung's "synchronicity," or about Fatima as perhaps somehow triggered by a memory of the Ferrer case in the Iberian "collective unconscious"! 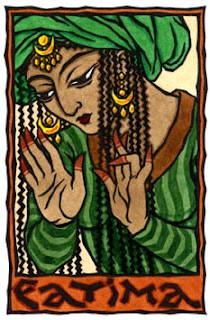 Also, the place name Fatima recalls the Prophet Muhammad's daughter Fatimah, wife of his chief disciple Ali, revered by many Muslims (especially Shi'ites) as a sort of Islamic Virgin Mary figure. One of the best-known modern Marian apparitions took place in a village named for the Muslim counterpart of Mary! Portugal, like Spain, was occupied by the Muslims in the Middle Ages, we may recall. Again, could there possibly be
some sort of obscure connection here in this odd "name game" coincidence?
Could this Fatima-Fatimah connection be more "Twilight Language" at play?


Stimulated by T. Peter Park's essay, I note that October 13ths have, in the last forty years, been linked to aircraft crashes and disasters. For example:

1923 - Death of Alexis Maneyrol, French aviation pioneer, killed when his Peyret monoplane broke up in the air at Lympne Air Races, Kent.1972 – An Aeroflot Ilyushin Il-62 crashes outside Moscow killing 176. 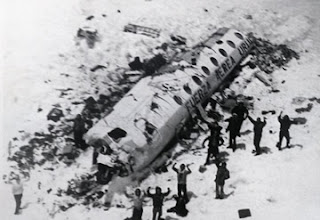 1972 – Uruguayan Air Force Flight 571 crashes in the Andes mountains, near the border between Argentina and Chile. By December 23, 1972, only 16 out of 45 people lived long enough to be rescued. Survivors resort to eating dead passengers before their rescue two months later.
1976 – A Bolivian Boeing 707 cargo jet crashes in Santa Cruz, Bolivia, killing 100 (97, mostly children, killed on the ground).
1977 – Four Palestinians hijack Lufthansa Flight 181 to Somalia and demand release of 11 members of the Red Army Faction.
1983 – On night of October 13/14, Coastal Airways 707-436 was destroyed by fire at Perpignan, France.1992 – An Antonov An-124 operated by Antonov Airlines registered SSSR-82002, crashes near Kiev, Ukraine killing 8.
2009 – UN General Assembly decided to designate October 13th as the official date for the International Day for Natural Disaster Reduction. International Day for Natural Disaster Reduction encourages every citizen and government to take part in building more disaster resilient communities and nations.
2010 – The Copiapó mining accident in Copiapó, Chile comes to an end as all 33 miners arrive at the surface after surviving a record 69 days underground awaiting rescue.

As noted by Enki in a comment below, and MB in a communique:


On Friday, October 13, 1307 ... [King] Philip [IV of France ] ordered [Jacques] de Molay and scores of other French Templars to be simultaneously arrested. The arrest warrant started with the phrase: Dieu n'est pas content, nous avons des ennemis de la foi dans le Royaume ["God is not pleased. We have enemies of the faith in the kingdom"].  ~ Source.

Some have theorized that this event was the origin of the superstition that Friday the 13th is an unlucky day. It has also been suggested that the Templars, who had been exposed to Islam in the holy land, named Fatima, Portugal after Muhammad's daughter Fatimah. ~ Enki.

Friday, October 13, 1307 was the day that France's King Philip IV had officers round up several thousand Knights Templar. Some have theorized that this event was the origin of the superstition that Friday the 13th is an unlucky day. It has also been suggested that the Templars, who had been exposed to Islam in the holy land, named Fatima, Portugal after Muhammad's daughter Fatimah.

October 13 is also Chris Carter's birthday, and his production company Ten Thirteen Productions was named after this fact. Ten Thirteen Productions created The X-Files, Millennium, Harsh Realm, and The Lone Gunmen. The pilot episode of The Lone Gunmen, which aired in March of 2001, is notable for its seemingly prophetic plot: a plane is hijacked and an attempt is made to crash it into the World Trade Center. This syncs with the long list of aircraft disasters listed in this post.

some of us believe that the occult significance of the date is the very reason for choosing it. i think it's actually mentioned. the messages of fatima are in direct opposition to the objectives of the occultic global manipulators. as for the ufo contention- in the very same way the chariots and heavenly vehicles and apparitions in the old and new testaments are seen as ufo's and alien visitations by the ancient aliens set... which still doesn't contradict the validity of the bible, by the way. whatever it was, it was preternatural phenomena- which contemporary theorists are realizing- points to crypto science..... and the possibility that beings from the heavens or other dimensions are communicating- as in the bible. the fatima messages and story reveal a corrupt church and government - exposing both fascists and communist regimes as wicked, and simply stress a need for intercessory prayer. it points to jesus. also, there is strong indication that it's been coopted by those same enemies of christ within the church with ties to the globalist power agenda. still.. the original story and message are purely about prayer and devotion to christ and love for others.

I grew up in the uber-Catholic Rio Grande Valley, Texas. One of the local TV stations sent a reporter and cameraman to Fatima one year on the anniversary of the event(?). The cameraman captured the 'dancing sun' phenomena plain as day (unless he was just shaking the camera around!) but they did not air it as such. The footage is probably in a Vatican vault by now. BTW Remember the Big Bird sightings FYI one of those same TV stations reportedly filmed its footsprints...but that was longer ago still....