Element 11 in Utah has had its first human sacrifice. 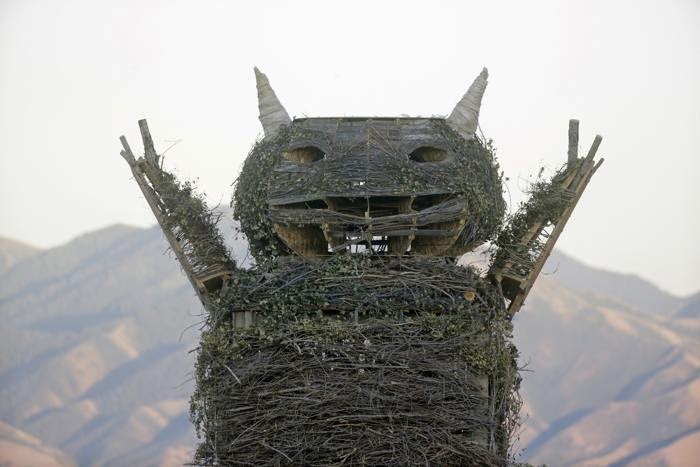 During an event that is similar, but the precursor to Burning Man, a man killed himself by jumping into a giant, three-story-tall effigy that had been burning for half an hour.

Above is a Saturday July 12, 2014, photo, showing the upper portion of a giant wooden effigy of a character from the classic children's book, Where the Wild Things Are. This was before it was burnt Saturday night, during the Element 11 festival. 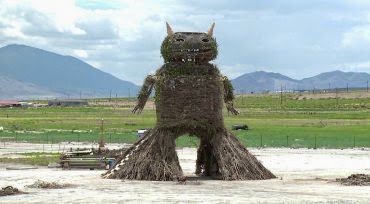 The Element 11 event occurs in Grantsville, Utah, about 36 miles southwest of Salt Lake City, and is quite similar to Black Rock, Nevada's Burning Man festival. Both, in many ways, are modeled on the pagan Wicker Man ceremonies. 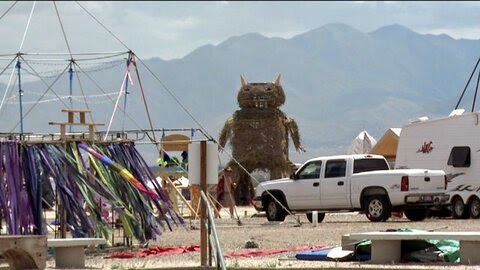 Salt Lake City resident Christopher Wallace, 30, was identified by police as the man who died after jumping into the burning giant effigy.

Wallace is a Scottish surname derived from the Anglo-Norman French waleis, which is in turn derived from a cognate of the Old English wylisc, pronounced "wullish," meaning "foreigner" or "Welshman." It sometimes is translated as "stranger."

The name Christopher is from the Late Greek name Χριστοφορος (Christophoros) meaning "bearing Christ," derived from Χριστος (Christos) combined with φερω (phero) "to bear, to carry". Early Christians used their own languages' forms of Christopher as a metaphorical name, expressing that they carried Christ in their hearts.

[One of the more infamous recent celebrities with the name "Christopher Wallace" is Christopher George Latore Wallace, born May 21, 1972, who was better known by his stage names The Notorious B.I.G., Biggie or Biggie Smalls. He was an American rapper, who was gunned down on March 9, 1997, at the corner of Wilshire Blvd & South Fairfax Avenue, 50 yards from the Petersen Auto Museum, Los Angeles, following a music awards after party there.]

Grantsville police Lt. Steve Barrett said Element 11's Christopher Wallace had told some of the estimated 1,200 attendees in advance about his plans to run into the fire. The three-story-tall effigy, modeled on a character from Where The Wild Things Are, had been burning for about 30 minutes and was fully engulfed when Wallace crossed a safety perimeter about 50 feet from the structure and jumped in, officials said.

"He was very fast; he was very motivated," J.P. Bernier, a spokesman for Element 11, told the Deseret News. "It wasn't an accident or any act of negligence on anybody's part. He had a very deliberate objective to get past our volunteers, past our safety perimeter."

Firefighters immediately tried to douse the flames, but were unable to save the man. Crews had measured the fire temperature at 2,000 degrees just prior to the apparent suicide, noted the Boston Globe. 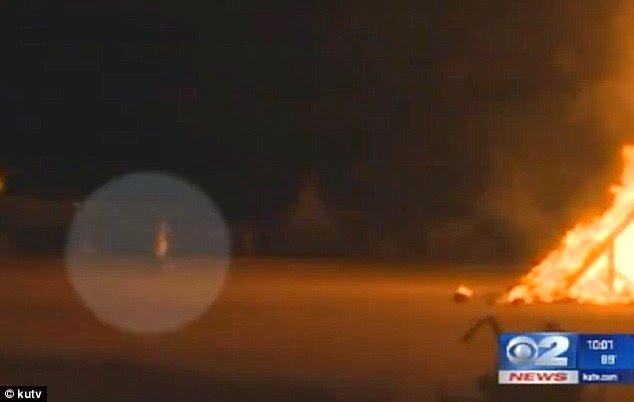 Some outlets, like local Utah station Channel 2 and the Daily Mail, broadcast stills from a video showing Wallace breaking through the line and racing to his death in the effigy fire. 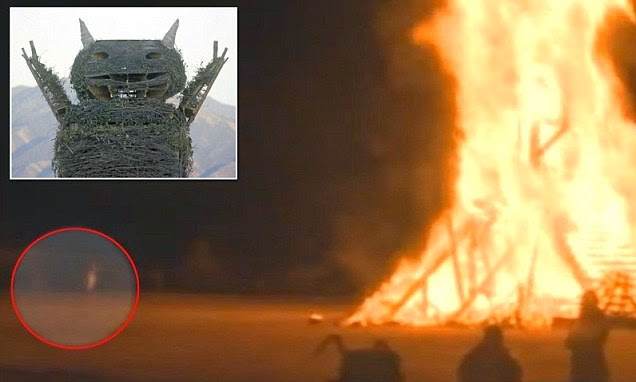 Element 11 is Utah's version of the famous Burning Man festival, which is held in Nevada every year. Only this festival takes place in the west desert at the Bonneville Seabase, in Tooele County, Utah. And reportedly, Element 11 existed before Burning Man. Burning Man has had its own deaths. 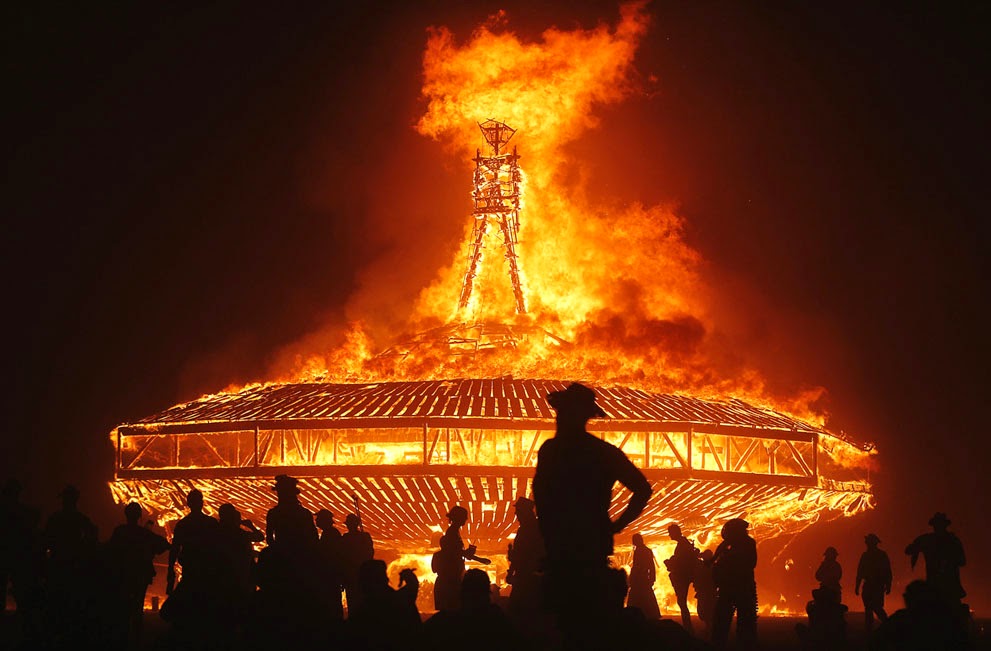 
It will be recalled that conspiracy author Jim Keith, at the age of 50, died mysteriously, on September 7, 1999, during routine knee surgery at a Nevada hospital. He had been taken there after falling off the stage at the annual Burning Man pagan arts festival in the Black Rock Desert, about 120 north of his hometown of Reno. Cryptically, Keith stated, prior to his death, "I have this feeling that if they put me under I'm not coming back." 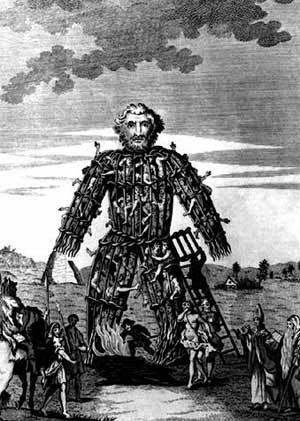 Human sacrifices and the Wicker Man are tied together in ancient history. Caesar reports that some of the Gauls built the effigies out of sticks and placed living men inside, then set them on fire to pay tribute to the gods. Caesar writes that though the Druids generally used those found guilty of crimes deserving death, as they pleased the gods more, they sometimes used slaves and innocent men when no delinquents could be found.

One medieval commentary, the 10th-century Commenta Bernensia, states that men were burned in a wooden mannequin in sacrifice to Taranis. Read more on the Wicker Man, here. 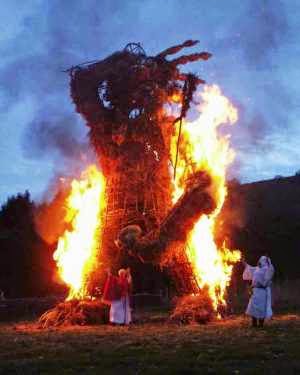 The non-profit art festival called Element 11 aims to ignite a culture of creativity and self-expression for its 1,200 participants. The artwork at the event is funded by previous years' ticket sales. Volunteers work on the art pieces for several months. During the festival they burn the artwork. Organizers say for some it signifies love, loss, letting go and moving on, reported Fox Salt Lake 13.

WHAT IS ELEMENT 11?
el·e·ment 11 (ˈeləmənt/) noun
1. The eleventh element on the periodic table, sodium. The sixth most abundant element on earth. An identifying characteristic of Utah, given the Bonneville Salt Flats and the Great Salt Lake.
2. A volunteer-based non-profit organization with the mission to ignite a culture of creativity & self-expression! We provide a canvas for our community to play, dance, evolve, create & ignite.
3. A sanctioned regional Burning Man festival event dedicated to the Ten Principles and ethos of Burning Man. The Element 11 Arts Festival (UT Regional Burn) is held the second weekend of July each year.
4. A community of radically self-expressive artists, creators, innovators, do-ers, & participants who see art in all forms, in all ways, and in all people. 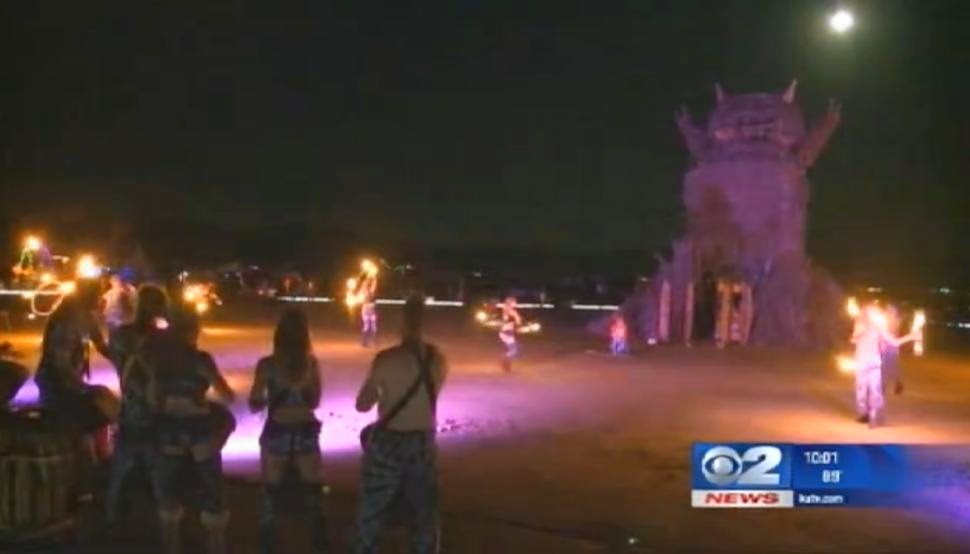 Element 11, before the effigy burns. 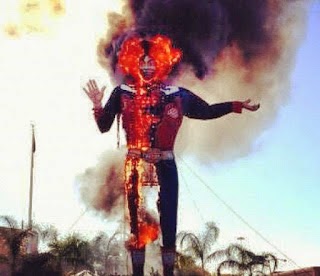 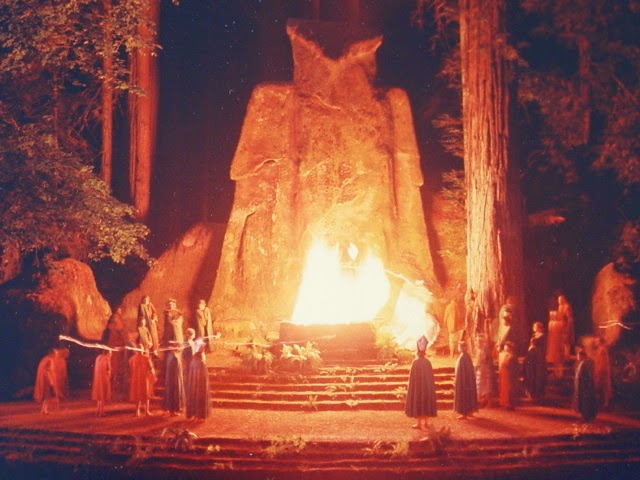 Bohemian Grove occurs over the course of the entire month of July, just north of San Francisco in Monte Rio, Sonoma County. Lamp lighters in robes set fire to an effigy of the god Moloch (or is it effigies of children) in a ritual ceremony at Bohemian Grove.


Why has a similar human suicidal incident at Transformus, the North Carolina burn, been kept quiet for years?
Posted by Loren Coleman at 6:23 AM

Wicked King Wicker appeared in aletter from Son of Sam, as I'm sure you know.

Wicker is related to witch and wicca.

Via etymonline, Weilisc also means, 'not free, servile'. perhaps implying that Mr. Wallace was not free or servile to some other agency [ human or otherwise].

Utterly shocking story. We need more on Wallace's background. What would drive him to such a decision? On a side note, I am reminded of the Oct 2012 "burning man" in the form of the Texas State Fair's iconic "Big Tex" cowboy figure that greeted fairgoers with a hearty "Howdy folks!" An electrical fire in Big Tex's right boot engulfed the folksy fair sentinel in flames. The image of Big Tex going up in smoke was decidedly eerie.

Great post. I believe that the cremation of care ritual at Bohemian grove involves the burning in effigy of a human child rather than Molech as you stated.

Bohemian Grove without a doubt is a reenactment of ancient Canaanite grove-ceremonies in honour of Asherah, considered by Jewish kabbalists to be a form of Lilith, who was an female owl-demon. Asherah in Hebrew means "grove" as well as the name of the goddess. This is also considered by some Jews to represent the shekhinah of JHWH, i.e. the feminine aspect of god. Note that many mighty Zionists attend the grove.