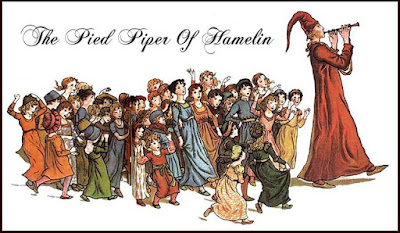 As I mentioned previously, one of the benefits of all the current media interest in the Phantom Clowns this time around are the historic overviews that are being revealed. 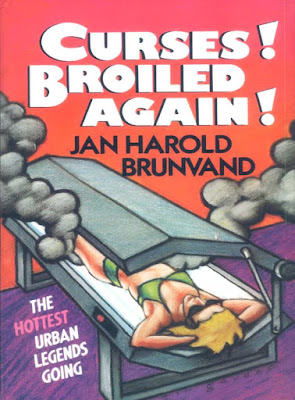 An old article that is being revisited is one by folklorist Jan Harold Brunvand.  Brunvand had just published a new collection, Curses! Broiled Again, and then wrote the following review of 1981 and 1985 cases, plus taking a then-contemporary look at some new 1991 Phantom Clowns encounters. While the article is important as it did review past recent events, it also reminded people that these stories go back to the Pied Piper of Hamelin folktales, dating from 1300 A.D.

Killer-clown rumors surfaced briefly again in 1985, then faded until this June [1991] - exactly 10 years after the first cycle of similar stories [in 1981].
This time the setting is New Jersey. My first report of the return of the phantom clowns came in a letter from West Orange, N.J., postmarked June 12 [1991]. I haven't been able to decipher the signature, but I did manage to make out the message:
"My mom teaches school in South Orange, N.J., and the kids at school are all terrified by the rumor that there is someone dressed as a clown driving around kidnapping children. The story has grown to the point where the clown has a name, Homey, and now they are saying that there are a whole bunch of clowns riding around in a van."
The next day I got a note from Joseph Zarra of Belleville, N.J., enclosing a clipping from the Newark Star-Ledger of an article headlined "Child-abducting 'clown' rumor persists in plaguing Essex towns." It's the same old story.
First-, second- and third-grade children in several communities were claiming that a van containing a clown, or several clowns, was cruising the streets looking for young victims to kill or abduct. The name "Homey" came from a character who frequently appears on the Fox network series In Living Color.
An East Orange police officer commented, "It just spread, from one kid to another, and continued until there was a kind of a hysteria."
One child, who later retracted his story, told police that a clown holding a machete in one hand and an Uzi machine gun in the other fired five shots at him before he drove him off with his bookbag.
New Jersey police questioned 700 schoolchildren, many of them "petrified" by the rumors, but concluded, "We couldn't substantiate the existence of a clown. We have no sightings, no assaults, no homicides."
Mysterious America, a 1983 book by Loren Coleman, gives a good account of the 1981 phantom-clown scares. In May, reports of clowns riding in vans and threatening children surfaced in Boston and some of the surrounding communities. Shortly afterward the same story showed up in Providence, R.I.; Kansas City, Mo.; Kansas City, Kan.; Omaha, Neb.; Denver; and Pittsburgh.
Many of the children's stories included specific details: They said that the vans were black, green, blue or yellow, and that the clowns were armed with swords, knives or guns.
The only other clown scare I'm aware of since that time occurred in late March 1985, when the Phoenix area experienced a brief period during which similar stories spread among local schoolchildren.
Although no police authorities anywhere have verified the existence of the phantom clowns, some people take the threat seriously. A warning circulated in a 1986 newsletter claimed that clowns were responsible for children being "spirited away to join the throngs of missing children whose pathetic faces peer at us from milk cartons, shopping bags and telephone bills."
If child-abductors disguised as clowns exist, why do they cease their nefarious activities for such long periods of time? Who is sending in these clowns, and why don't the police ever catch them?
Probably the source of the stories lies more in folklore than in actual crimes. Loren Coleman suggests a connection to the Pied Piper of Hamelin who, according to legend, lured away all the children of the German town, never to be seen again. ~ Jan Harold Brunvand, "Someone Keeps Sending in the Phantom Clowns," Deseret News, August 9, 1991.

For more on the Pied Piper of Hamelin, see also here.

"Pied" refers to clothing "having two or more different colors," the attire of a clown.

As has been noted by some comment makers, it is intriguing that a concentration of the recent reports have been in the Piedmont Triad in North Carolina. (See here and here.) 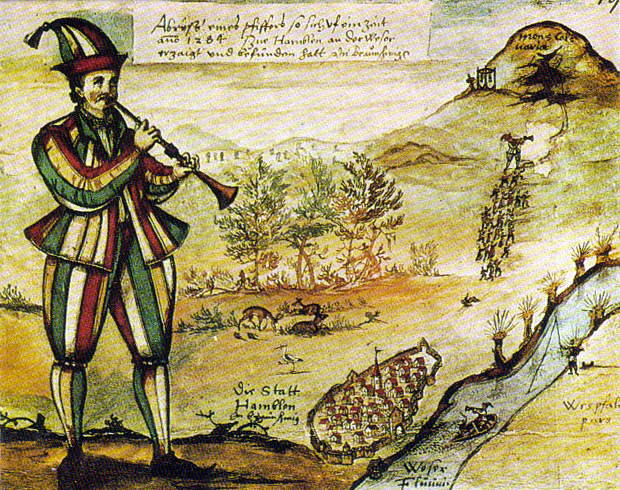 Posted by Loren Coleman at 4:32 PM

I read Mysterious America for the first time back in the mid-90s and I have returned to it time after time as a solid resource for all things weird and wonderful (and I cited it is a reference for my own self-published work). The section on Phantom Clowns was always a favorite of mine and I absolutely loved the way that you tied in the legend of the Pied Piper of Hamelin into modern sightings of strange men attired in bright colored clothing and makeup, who seem to have a disturbing predilection for attempting to lure children away. Repeating patterns such as this have always made me wonder if any kind of strange happenings in modern times are truly "new" or if they are simply manifestations of ageless weirdness which differ only slightly as they are described by witnesses within the modern social construct of their times. The hints that these are possibly repeats of timeless events lies in the name similarities and witness descriptions, that seem to vary only slightly over time. This blog is vital to trying to understand it all.

Looking at the history of the Pied Piper, I find a couple of intriguing Twilight Language connections with present day events.

Let's start with the image you post. It was a painting made in 1592, copying the stained glass window that appeared in the Marktkirche (Market-Church) in Hamelin that was originally built in the early 13th Century.

English translation of a story written in Latin by a monk in 1370:
https://www.lib.latrobe.edu.au/ojs/index.php/tlg/article/view/390/383

To be noted is a marvellous and truly extraordinary event that occurred in the town of Hamelin in the diocese of Minden in the year of the Lord 1284, on the very feast-day of Saints John and Paul. [June 26]

A young man of 30 years, handsome and in all respects so finely dressed that all who saw him were awestruck by his person and clothing came in by way of the bridge and the Weser Gate.

On a silver pipe which he had, of wonderful form, he began to play through the whole town, and all the children hearing him, to the number of 130, followed him beyond the eastern wall almost to the place of the Calvary or Gallows field, and vanished and disappeared so that nobody could find out where any one of them had gone.
---------


Notice that rats are conspicuously missing from these early accounts of the Pied Piper. He only leads children away with his piping.

Now we come to the German versions of the tale which include rats. Indeed the German word for Pied Piper is Rattenfänger, which means “Rat-Catcher.” The Brothers Grimm fairy tale of the Pied Piper, written in 1816, contains many of the same specific details from the above monk's account from 1370, which are missing from the English version of the tale. However Grimm adds the rats to the story, likely because Rat-Catchers made the scene in Europe in the years after the Black plague struck there in 1348.
https://en.wikipedia.org/wiki/Pied_Piper_of_Hamelin

In the monk's tale, the Pied Piper arrives in Hamlin on June 26, 1284, a good 6 or 7 decades before the Black Plague strikes Europe.

But then several scholars suggest that the Pied Piper tale is not at all about the plague but rather about the Children's Crusade which supposedly took place in 1212, a good 7 decades BEFORE the Piper arrives in Hamlin.
https://en.wikipedia.org/wiki/Children%27s_Crusade

The Children's Crusade is the name given to a disastrous Crusade by European Christians to expel Muslims from the Holy Land said to have taken place in 1212. The traditional narrative is probably conflated from some factual and mythical notions of the period including visions by a French boy and a German boy, an intention to peacefully convert Muslims in the Holy Land to Christianity, bands of children marching to Italy, and children being sold into slavery.

I raise this question: Could the present Phantom Clown flap with its fearsome specter of abducting children away from their parents be a kind of psychological displacement or denial of both American and Central European xenophobia, especially directed at Muslims who we fear want to convert us to Islam?