Guilford County, North Carolina was the location, again, of another incident. The Greensboro, North Carolina police received a call Tuesday, September 6, 2016, about "another clown sighting in the Piedmont Triad."

The sighting occurred at The Park at Oak Ridge apartments off Old Oak Ridge Road not far from Interstate 73. A man said he saw a clown near the wooded area behind the complex at about 10 a.m.
Chris Bass told WGHP that he lives at the complex with his wife and two children. He said he was on his balcony when he spotted a man in a white mask, red curly hair and blue pants in the wooded area. Bass tried to chase the clown but could not catch him. He called his actions his "fatherly instinct." Source.


Why might local law enforcers be taking the reports of clowns trying to lure little children into the woods so seriously? Could it have something to do with the 50th year anniversary of some horrible events that happened in this area? 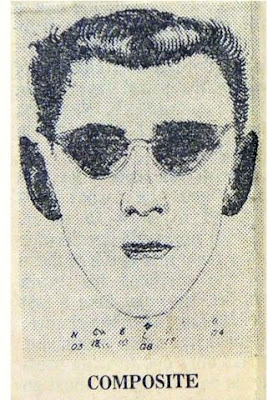 High Point, North Carolina, has had a strange history of weird crimes. It’s been 50 years since the city was stalked by The Paddler. Pretending to be a police officer —The Paddler lured young boys into his car, driving them to secluded areas and paddling them relentlessly before finally letting them go.


By mid-May of 1966, five boys — ranging in age from 11 to 16 — had fallen prey to The Paddler...Thanks to an officer with a keen eye and an even keener memory, police got their man on May 19, 1966 — only five days after he had assaulted Thomasville teenager Jerry Hazel. The break came when a Winston-Salem Police officer saw the composite drawing of the suspect and recognized him as someone he'd encountered before. That night, he and other officers arrested 25-year-old truck driver George Kent Wallace —aka The Paddler — at his home in Winston-Salem, charging him with impersonating a police officer, kidnapping, and assault with a deadly weapon on a minor. Source. 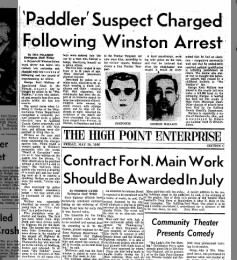 After George Kent Wallace got out of prison, having served his 10 year sentence for being The Paddler, he went on to do more violence.


He would spend the next 14 years in and out of prison for doing exactly what he'd done in High Point: Pretending to be a police officer. Luring adolescent boys into his car. Driving them to secluded areas. Paddling them. Source.

But then he turned to murder.


In the 1976 case, Wallace picked up 14-year-old hitchhiker Jeffrey Lee Foster, who was hitchhiking from Hanes Mall in Winston-Salem. After driving to the end of a dead-end road, Wallace dragged the teen to the back seat, pulled his pants down and paddled him. Then he resumed driving, "looking for a satisfactory place to kill him," Wallace would say later. When he found that place, he dragged the boy out of the car, put him on his stomach and stabbed him to death.
In the 1982 case, Wallace "arrested" 18-year-old Thomas Stewart Reed at a shopping-center parking lot in Winston-Salem, then drove to some abandoned acreage he had scouted a few weeks earlier. When Reed refused Wallace's order to get in the back seat, Wallace hit him across the legs with a paddle, then struck his head several times with a BB pistol as the two scuffled. The teen stopped struggling momentarily, but when he resumed, Wallace gave up trying to get him into the back seat and stabbed him to death, too. Source.

George Kent Wallace would go from being a serial paddler to a serial killer, in High Point, North Carolina, in Enterprise, North Carolina, and in Fort Smith, Arkansas, eventually he was captured. He was finally executed —on August 10, 2000.