InFocusTech has produced a new replica building that should be of some interest to readers of this blog.

Here is their description:

"The Wardenclyffe Tower was built in 1901-02 by Nicola Tesla to transmit voice and data across the Atlantic. Located in Shoreham New York, our faithfully reproduced replica is made in the 1" - 50' scale." 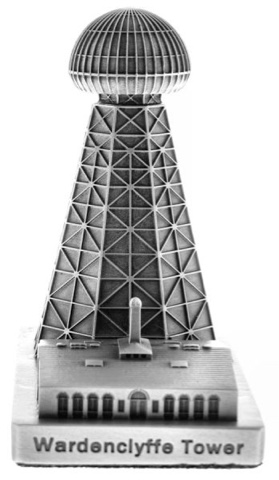 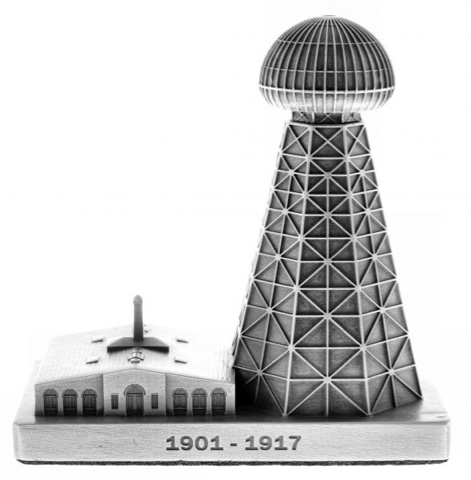 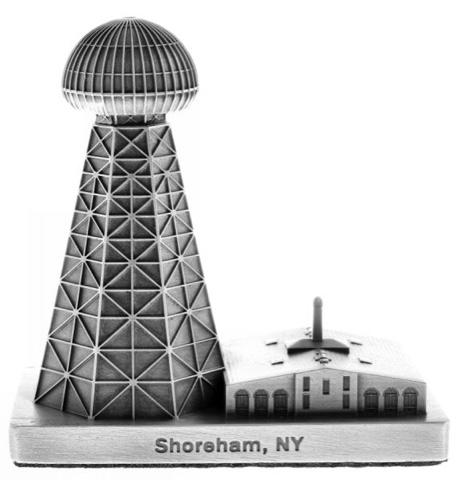 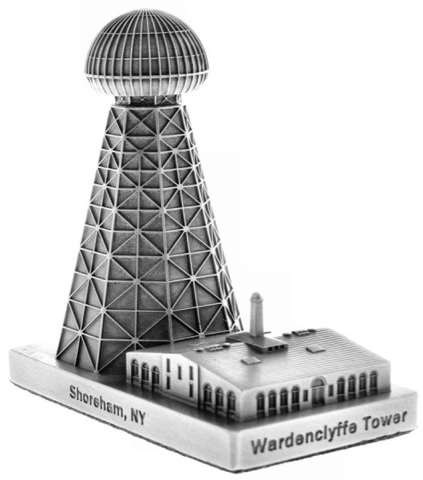 Wardenclyffe Tower (1901–1917), also known as the Tesla Tower, was an early wireless transmission station designed and built by Nikola Tesla in Shoreham, New York in 1901-1902. Tesla intended to transmit messages, telephony and even facsimile images across the Atlantic to England and to ships at sea based on his theories of using the Earth to conduct the signals. His decision to scale up the facility and add his ideas of wireless power transmission to better compete with Guglielmo Marconi's radio based telegraph system was met with the project's primary backer, financier J. P. Morgan, refusing to fund the changes. Additional investment could not be found and the project was abandoned in 1906 and never became operational.

In an attempt to satisfy Tesla's debts, the tower was demolished for scrap in 1917 and the property taken in foreclosure in 1922. For 50 years, Wardenclyffe was a processing facility producing photography supplies. Many buildings were added to the site and the land it occupies has been trimmed down to 16 acres (6.5 ha) but the original, 94 by 94 ft (29 by 29 m), brick building designed by Stanford White remains standing to this day. In the 1980s and 2000s, hazardous waste from the photographic era was cleaned up, and the site was sold and cleared for new development. A grassroots campaign to save the site succeeded in purchasing the property in 2013, with plans to build a future museum dedicated to Nikola Tesla.

The Tesla biographer John Joseph O'Neill noted the cupola at the top of the 186 foot tower had a 5-foot hole in its top where ultraviolet lights were to be mounted, perhaps to create an ionized path up through the atmosphere that could conduct electricity. How Tesla intended to employ the ground conduction method and atmospheric method in Wardenclyffe's design is unknown. Power for the entire system was to be provided by a coal fired 200 kilowatt Westinghouse alternating current industrial generator.

On May 2, 2013, The Tesla Science Center at Wardenclyffe announced that they had purchased the 15.69-acre laboratory site from Agfa Corporation and will begin to raise "about $10 million to create a science learning center and museum worthy of Tesla and his legacy." On July 10, 2014, Elon Musk, CEO of Tesla Motors, pledged to donate $1 million.

On May 13, 2014, The Oatmeal published a comic called "What It's Like to Own a Model S, Part 2," in which he requested a further donation of $8 million from Tesla Motors founder Elon Musk in order to propel the museum toward completion. The next day, Musk stated on Twitter that he "would be happy to help." On July 10, 2014, during a 158th birthday celebration for Tesla at the Wardenclyffe site, it was announced that Musk would donate $1 million toward funding the museum, as well as having a Tesla Motors supercharging station installed onsite.

The center plans to offer several programs, including science teacher associations, conferences, symposia, field trips, associations with science competitions, and other science programs. Planned permanent exhibits include a Tesla exhibit, exploratorium-type exhibits, and a living museum. On September 23, 2013, the president of Serbia, Tomislav Nikolić, unveiled a monument to Tesla at the Wardenclyffe site. Nikolić said that he had planned to push for the monument to be displayed at the United Nations, but chose Wardenclyffe once he learned it had been purchased for the center.

On 9.6.16, InFocusTech announced the public availability of their replica of the Telsa or Wardenclyffe Tower. For the record, I receive no fiscal percentage by highly recommending you may order this replica by clicking Wardenclyffe Tower.
On January 7, 1943, at the age of 86, Nikola Tesla died alone in room 3327 of the New Yorker Hotel.
Room 237 is of some significance within synchromysticism.
Posted by Loren Coleman at 10:02 PM

The evocation of Trinidad 33 from Tesla's NYC hotel room number of 3327
http://copycateffect.blogspot.com/2016/06/Trinidad.html

brings us to Colorado, where the next TL post notes the numbers 402 and 42 in relation to yet another death in Colorado.
http://copycateffect.blogspot.com/2016/07/402.42.html

which then leads to Tesla's lab in Colorado Springs.
http://welweb.org/ThenandNow/tesla.html

The Colorado Springs Evening Telegraph of May 17, 1899 reports on Tesla's project

NIKOLA TESLA WILL “WIRE” TO FRANCE
The Wizard of Electricity arrive in city at noon and will carry on extensive experiments in connection with wireless telegraphy and upper atmosphere.

We are coming up to the 15th anniversary of 9/11. In the US we write Month-Day