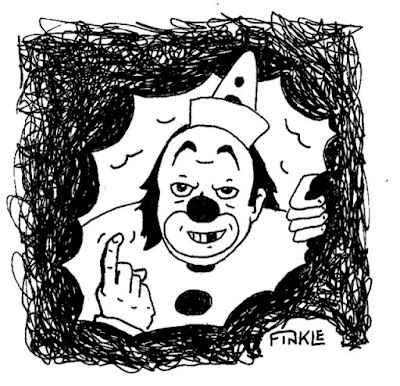 Active reports are coming in from elsewhere in the state:

Chief Deputy Ronnie Williamson says the McDuffie County Sheriff's Office has received two calls reporting clown sightings in the county. At 11:46 p.m. on Sept. 11, a caller reported seeing a clown standing on the side of State highway 221 between Hobbs Road and the Jefferson County line. And on Sept. 13 at 6:37 a.m., a caller reported at clown chasing children from a school bus stop in the area around Davis Circle.
"Both of them were running, he's like 'mom mom there's a man chasing us in all black and a clown suit,'" said Caris Frails, who called the police after the sightings.
Frails couldn't believe what she was hearing from her kids. Two people -- dressed as clowns, standing near the bus stop, scaring kids.
"There are these sightings out about clowns here, clowns there, but when it hits close to home, that's a whole different story," said Frails.
Frails called the McDuffie County Sheriff's Office and they are taking the report very seriously. The school board and sheriff's office both monitoring
the stop until further notice.
"We didn't think it would happen in McDuffie County but it seems like it has," said Major Ronnie Williamson.
Major Williamson says even if these clowns are just clowning around, it could wind up with someone getting seriously hurt, as people try to protect themselves.
"It's going on throughout the country it seems like, and what could be an innocent scare could lead to someone getting hurt," said Major Williamson.
One mom at the bus stop this morning says she couldn't make out a description since it was dark out, but they were there.
"We came out right here, and the clowns were standing right here behind this house and they were scaring the kids," said Brenna Dove.
Frails will be taking her kids to the bus stop herself from now on.

"When you get to my kids, and they were as terrified as they was this morning, you have crossed the line," said Frails.
Chief Deputy Williamson says the sheriff's office is taking the sightings seriously and will press criminal charges once the suspect or suspects are caught.
In the state of Georgia, it is illegal to wear a mask, hood or any other device that conceals the person's identity while in public or on private property without the owner's permission. Source

Posted by Loren Coleman at 5:20 AM

Now it seems the Copycat Effect takes over

Several cryptic posts from the Facebook page of a group known as the 'Flomo Klowns' put two Southern Alabama schools on lock down for a while Thursday morning.

The Flomaton Police Department received information from a parent that her child had been sent threatening messages on Facebook from the group.

Four teens arrested for posting a faux Facebook page threatening to don the clown costume and abduct children into a white van.

Athens, GA: Girl brings knife to school out of fear of creepy clowns.

I'm wondering if this is not a test to see how panic spreads.