In one episode of his show, anti-pineapple-pizza-activist Anthony Bourdain changed his mind in Rome. He accepted pineapple on pizza as having redeeming value.

Of course, maybe Bourdain realized it wasn’t an American pizza, after all, but a Greek-chef-living-in-Canada’s invention.

What is bizarre, the "sudden death" of that Greek cook occurred on June 8, 2017, one year before Bourdain's surprise suicide by hanging. 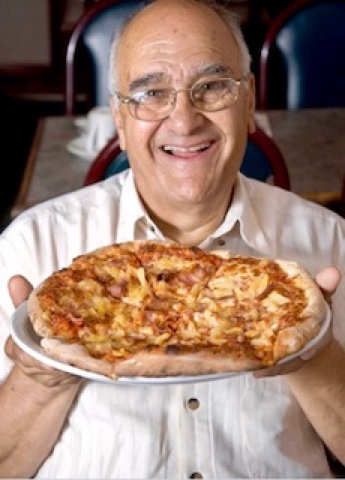 Sotirios "Sam" Panopoulos (Greek: Σωτήριος Πανόπουλος; 20 August 1934 – 8 June 2017) was a Greek-born Canadian cook and businessman, credited as the inventor of Hawaiian pizza (putting pineapple on pizza). He emigrated to Canada in 1954, aged 20, arriving in Halifax, Nova Scotia. He settled in London, Ontario, and lived the rest of his life there. In good health, he died unexpectedly at 82. No public details are known about his cause of death.

In a doubly bizarre "coincidence," Clemens Wilmenrod (July 24, 1906 – April 12, 1967) who was the first German television cook (real name Carl Clemens Hahn), is considered the 1955 inventor of Toast Hawaii. He died by suicide in a Munich hospital in 1967.
Posted by Loren Coleman at 9:32 AM

(Article behind a pay wall)

According to Wikipedia: in one memorable incident, after being accused by a viewer of not having invented the "filled strawberry" himself, Clemens Wilmenrod put a long cook's knife against his chest and swore to kill himself if a single viewer who had previously eaten filled strawberry were to call.

Note also that Wilmnerod committed suicide when he was 61 years old, just like Bourdain.