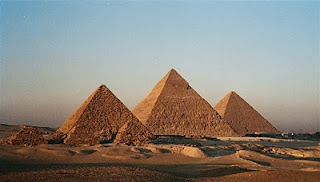 This is getting serious. One of the objectives of the new Muslim Brotherhood in Egypt may be the destruction of the last of the Seven Wonders of the Ancient World.


According to several reports in the Arabic media, prominent Muslim clerics have begun to call for the demolition of Egypt’s Great Pyramids—or, in the words of Saudi Sheikh Ali bin Said al-Rabi’i, those “symbols of paganism,” which Egypt’s Salafi party has long planned to cover with wax. Most recently, Bahrain’s “Sheikh of Sunni Sheikhs” and President of National Unity, Abd al-Latif al-Mahmoud, called on Egypt’s new president, Muhammad Morsi, to “destroy the Pyramids and accomplish what Amr bin al-As could not.”

This is not anti-Islamic craziness. There is a reality for the fear of the loss of the Pyramids. Currently, in what the International Criminal Court is describing as a possible “war crime,” Islamic fanatics are destroying the ancient legacy of the city of Timbuktu in Mali—all to Islam’s triumphant war cry, “Allahu Akbar!” 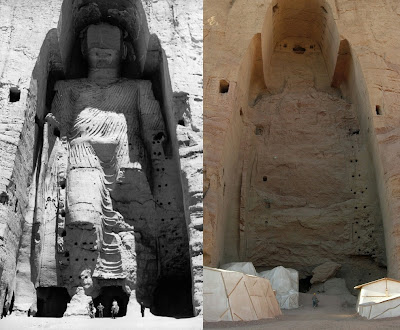 The taller Buddha of Bamiyan is shown before (left picture) and after the destruction (right) of March 2001 by the Taliban. Those are people shown at the bottom. 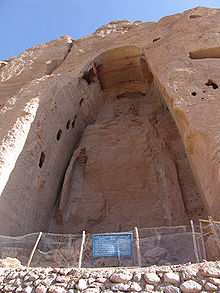 Site of the smaller Buddha was destroyed in 2005.

I highly doubt whoever's in charge of the new Egyptian government would allow the nation's greatest source of income to be destroyed.
Some of those fundamentalists may not like tourism, but without the dollars the tourists bring every year Egypt would collapse.

That said, the pyramids could be the subject of vandalism in the coming weeks.

I agree with Red Pill. They have to be smart enough to know it could kill their economy, especially with the instability of the are and government itself. And if they do make good on the threat you will see Egypt start to collapse and more violence to erupt.

Didn't the Taliban destroy a large Buddha sculpture in Afghanistan some years back?

I think it would be unwise to believe that extremists won't do extreme things if they are given power.

Would be a momentous doing.

It's the belt buckle of fire & water.

Undoing it would be invocation.

An invocation to release (read Spring) the event horizon.

The last pines to join the others methinks. The world is a nut.

Tourism has never been a big source of income in Afghanistan —that has always been covered by the opium market.

It will get interesting when someone starts calling for the destruction of the Gothic Cathedrals of Europe.

Great article, although these nutcases are NOT the descendents of the original people of Kemet (Egypt). And I agree with Red Pill, they wouldn't dare to remove their main source of income.