Morgan Paull, who played Blade Runner's Holden, has died. Holden is the Blade Runner initially assigned to track down escaped replicants in the film of the same name.

While doing a Voight-Kampf test on new employees at the Tyrell Corporation, Holden interviews Leon (Brion James). Too slow in pulling his own gun, Holden is blasted through the wall by the replicant Leon. He ends up in the hospital on life support. Deckard (Harrison Ford) is called in to replace him.


Morgan Paull died Tuesday, July 17, 2012, in Ashland, Oregon, after having been diagnosed with stomach cancer. He was 67.

The actor had previously been a candidate for president of the Screen Actors Guild in 1981, but came in third, with Ed Asner winning the post. 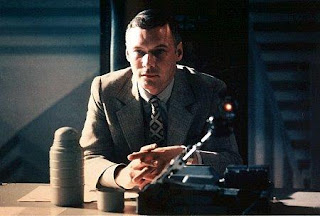 Paull appears in the gripping opening scene of Ridley Scott's 1982 film Blade Runner, where as a detective he confronts a job applicant to make sure he is not a replicant, or genetically engineered human.

A filmed, but deleted, scene has Deckard visiting Holden in the hospital. At the end of the scene Gaff says "Yes, you idiot" in Japanese.