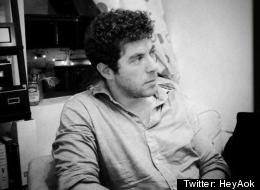 The bizarre death coincidences associated with President Barack Obama's campaign continue. On Friday the 13th of July, Alex Okrent (pictured above), a 29-year-old vet of two of Obama's earlier runs, died suddenly.  He reportedly "collapsed" at Obama's Chicago campaign headquarters, according to media outlets, including the Chicago Sun-Times, USA Today, and the Huffington Post. Okrent was an employee of the campaign's paid media department.

After he collapsed, Chicago paramedics were first called to the Obama headquarters in the Prudential Building, and then Okrent was taken to Northwestern Memorial Hospital where he was pronounced dead.

"Obama was campaigning in southern Virginia this afternoon, when he learned about Okrent's death," according to USA Today.

Traveling in Virginia on Friday, Obama called Okrent's family to express condolences. The president later spoke with other campaign staffers in a conference call.
+++
Alex's father, Mike Okrent, (on July 14th) spoke to the media, telling them that his son died of a "heart attack."

The name “Okrent” sounds unfamiliar, but there is one famous individual linked to the media who shares that same last name with Alex Okrent.

Editor and writer Daniel Okrent, still living, was born April 2, 1948, in Detroit, Michigan. He is best known for having served as the first public editor of The New York Times, and as the inventor in 1979, of Rotisserie League Baseball (the best-known form of fantasy baseball) and the sabermetric "WHIP" ("walks plus hits per inning pitched”).


Daniel Okrent is also known for coining "Okrent's Law" during his tenure as a comment he made about his new job. It states: "The pursuit of balance can create imbalance because sometimes something is true," referring to the phenomenon of the press providing legitimacy to fringe or minority viewpoints in an effort to appear even-handed. (This is one of the underlying organizing guidelines to be found in Aaron Sorkin's new fictional news program detailed in HBO's Newsroom.)

Ann & I were deeply saddened to learn of the death of Alex Okrent. Prayers are with Alex’s loved ones and the entire Obama campaign team.
July 13, 2012 11:48 pm via web Reply Retweet Favorite
Then top Obama advisor David Axelrod tweeted back to Romney:

@MittRomney Thank you, governor. Alex was a beloved member of our team. It's been a very emotional day.
July 13, 2012 11:54 pm via Twitter for iPhone Reply Retweet Favorite