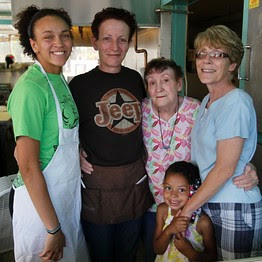 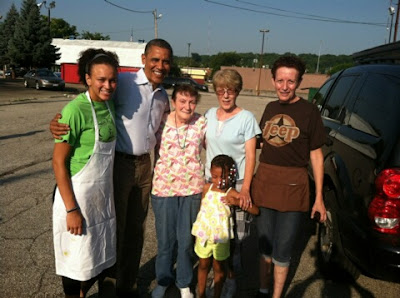 Photo by Taylor NaShay.
Harris met -- and hugged -- Obama just after 8:00 a.m., when he stopped in unannounced for breakfast.

Obama enjoyed a breakfast of eggs, bacon and whole wheat toast - plus grits at the suggestion of Toni Watkins, a waitress for 23 years at Ann’s Place. The White House said the president ate with three long-time Goodyear workers -- Rick Nixon, Jim DiFalco and Keith Ross, according to ABC News. 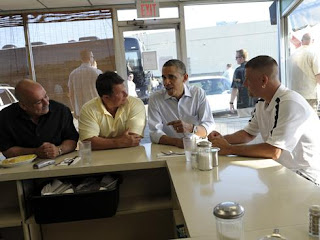 For more on the Watts/Watkins name game, click and read here.

Barack Obama's grandmother, whose personality and bearing shaped much of the life of the Democratic presidential contender, died, Obama announced one day before the 2008 election. Madelyn Payne Dunham was 86 and died late Sunday, November 2, 2008.
Aferrismoon writes in noting, "It has happened before."


Indeed, it has and was covered here at the Twilight Language blog. 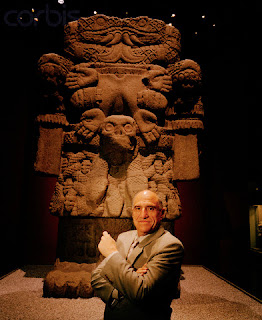 On April 16, 2009, Felipe Solis, a distinguished archaeologist, was with President Barack Obama at a gala dinner at the museum and showed Obama around the Mexico City's anthropology museum. Then, Solis died the next day from "flu-like symptoms." Officially, it was called "pneumonia," but unofficially, Solis died of swine flu. 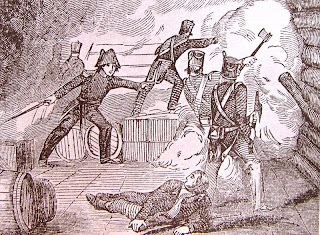 Zachary Taylor became a war hero when he defended Fort Harrison during the War of 1812, and in other engagements. The 12th President of the United States, Zachary Taylor died on July 9, 1850, of cholera after eating tainted cherries and milk in the middle of the summer.

On January 8, 1992, President Bush became ill during a state dinner in Japan and vomited on Japanese Prime Minister Miyazawa Kiichi. Due to that incident, Saturday Night Live then did a skit of the event.

Dining comes into play here, it seems. Another famous diner owned by a Harris, Caroline, is the Harris Steakhouse on Main Street, Point Pleasant, West Virginia. The location was first associated with death when the Silver Bridge collapsed, and the diner's then-husband died in that tragedy in December 1967. This diner was used as the model for the diner in The Mothman Prophecies (2002), and today is sometimes called the "Mothman Diner."
Posted by Loren Coleman at 7:37 PM

I guess there's something very ritualistic about breaking bread with a head of state. What other basic human necessity can you share with them other than that?

It's the only concrete validation we can make that they are as human as we are ;)