What is the most synchromystic, conspiracy-laden James Bond film? 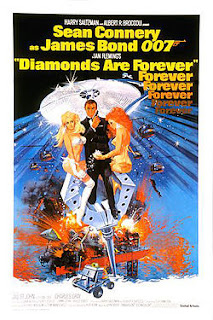 The answer is an obvious one. It happens to be the cinematic expression that revealed Ian Fleming's leaking of the Gemstone Files, in one of the 23 Bond films that have been made through 2012: Diamonds Are Forever (1971).


The visual and design legacy of Frank Lloyd Wright is to be found prominently in this movie. FLW-trained architect John Lautner's Elron House is one of the important filming locations, serving as the Howard Hughes-clone character Willard Whyte's "winter home."

Before learning from FLW in the 1930s, John Lautner's background was in Michigan, and he got his start in building at 12 years old. His family built a rural residence together, a cabin they named Midgaard, "a word from Norse mythology that described the home of mankind, situated between the land of ice and the land of fire."

Considering Lautner's Elrod (Old English for "noble counsel") House was built on client interior designer Arthur Elrod's 23 acre property in Palm Springs, California, in 1968, and the film was released in 1971, the shooting occurred soon after the house was constructed.

The following three images are from the Elrod House in Diamonds Are Forever. The House is the focus of Bond's meeting with the two female guards – Thumper and Bambi – who are the precursor characters for future acrobatic sci-fi fight sequences (including those seen in Blade Runner and Kill Bill). It is also the location of Bond's release of the "real" Willard Whyte character. 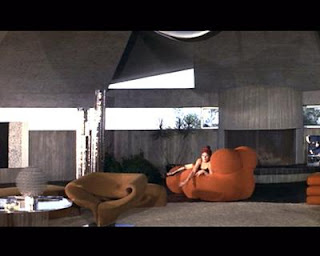 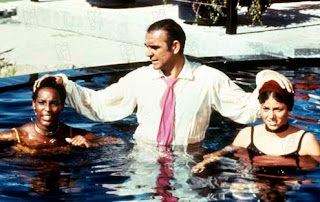 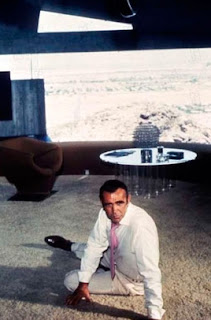 The Internet has many recent photos, including the following, of Lautner's masterpiece, as well as the floor plans, because the Elrod House has been up for sale for a bit under 14 million dollars for a few years. 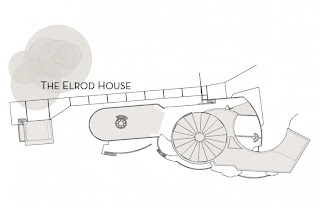 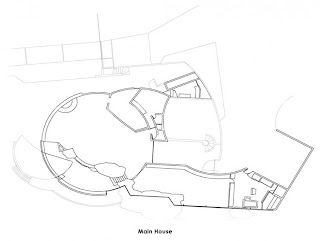 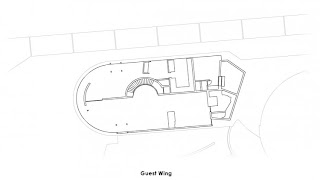 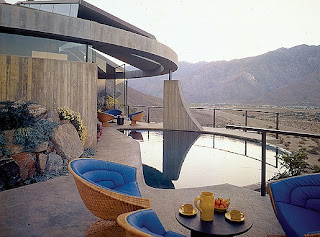 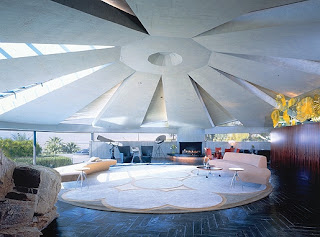 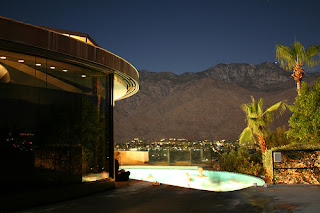 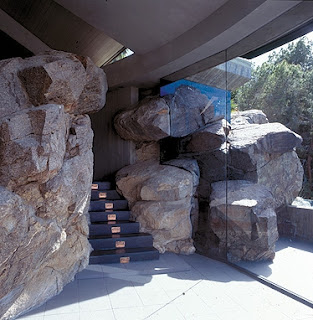 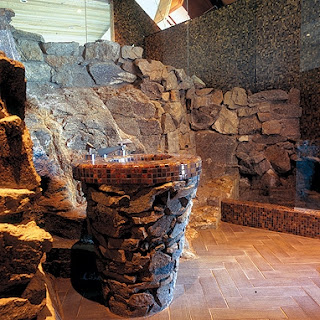 The Elrod House is a "gem" and thus a metaphor for the entire underlying, less than subtle theme, so apparent in the title of this film, Diamonds Are Forever. But do not fool yourself, these are hardly ordinary gemstones. 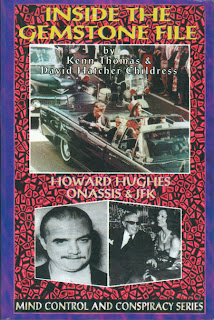 A detailed analysis of Diamonds Are Forever is included in David Hatcher Childress' chapter, "James Bond & The Gemstone File" (pages 69-90), contained in Inside the Gemstone File: Howard Hughes, Onassis & JFK by Kenn Thomas and David Hatcher Childress (Kempton, Illinois: Adventures Unlimited Press, 1999). Here is one short selection from the greater chapter [with a few comments added by me]:

In the filmed story of Diamonds Are Forever, the plot remarkably parallels The Gemstone File years before the Skeleton Key to the Gemstone File was ever circulated. The plot begins in the diamond fields of South Africa, as in Fleming's original book [1956], but soon diverges from the book to bring in elements of The Gemstone File and the Mafia/Las Vegas/Area 51 entanglement.
Bond is assigned to follow a trail of diamonds from South Africa to Amsterdam and then to Las Vegas where he is confronted by the Mafia. In one scene, James Bond sneaks into a secret facility in the Nevada desert outside of Las Vegas. This facility is the location of Mercury, the exit off that interstate highway leading to Area 51, the top secret space facility in south central Nevada rumored to house flying saucers and alien technology. 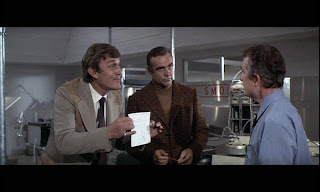 Once inside the facility, Bond pretends to be a worker in a lab coat and walks into a room where a German engineer is in charge. The man is clearly meant to be Werner von Braun. After witnessing the faking of the Apollo Moon missions, Bond steals the lunar rover and escapes into the desert. Does Diamonds Are Forever mirror the truth about NASA being part of a secret conspiracy? In the movie, the space facility and the Mafia are working together. 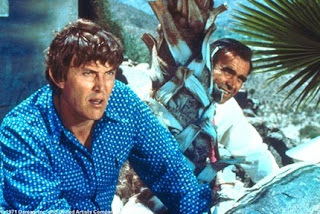 The movie, however, turns out to be the story of a kidnapped billionaire named Williard Whyte (played by Jimmy Dean of pork sausage fame), who is held in seclusion by [Ernst Stavro] Blofeld, exactly as [Bruce] Roberts claimed [American billionaire Howard] Hughes [sharing the double initials HH, just like Williard Whyte, WW ~ LC] was held captive by [Greek-born billionaire Aristotle Sokratis] Onassis.
Bond frees the kidnapped Willard Whyte and proceeds, with the help of Tiffany Case (played by Jill St. John), to attack Blofeld at his secret base: an oil platform either off the coast of Texas or California, the movie does not indicate which. [Yes, it does. The secret oil platform is shown off Baja California on a global map of Blofeld's empire, which matches the Onassis reach, btw ~ LC.] Bond destroys the oil platform but Blofeld escapes to reappear briefly in the 1981 film For Your Eyes Only when he is finally dispatched permanently. By this time, Onassis was dead as well.
Indeed, the parallels between Diamonds Are Forever and The Gemstone File are many:
*Willard Whyte is held captive in Las Vegas by Blofeld and the Mafia.
*Howard Hughes is held captive in Las Vegas and elsewhere by Onassis and the Mafia.
*Blofeld owns a casino named Casino Royale in Monte Carlo and has various "doubles."
*Onassis owns a casino named Casino Royale in Monte Carlo and Onassis has various "doubles" concocted by Onassis and Maheu.
*Blofeld owns oil fields and oil platforms. He is protected by foreign countries.
*Onassis owns oil tankers and has an exclusive deal with Saudi Arabia. He is protected by foreign countries such as Greece and Monaco.
*Blofeld owns his own island, high-tech yacht fleet, and private army.
*Onassis owns his own island (Skorpios), has a high-tech yacht fleet (Onassis owned many, many ships), and controlled a private army that allegedly went beyond the Mafia to the Marseille underground and the CIA and FBI.
*Diamonds Are Forever was about the secret NASA base outside of Las Vegas, and the use of diamonds to make a space-based laser system, one that could project holographic images into the sky.
*The Gemstone File is about synthetic rubies and their use by Hughes in laser research and Roberts' later use of these synthetic rubies as "gifts" with an attached "Gemstone Letter" that revealed certain behind-the-scenes activities of Onassis, the Mafia and the CIA to important and wealthy individuals. Las Vegas was the scene of Hughes' kidnapping and imprisonment, a city well known to be owned and run by the Mafia and their overt partners. 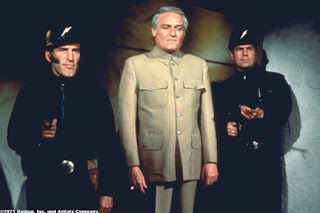 As Kenn Thomas and David Hatcher Childress theorize in their book, Inside the Gemstone File, Ian Fleming, a former British intelligence agent, used his books to unfold the secrets that he had discovered about Onassis and others through material that would someday be called the Gemstone File. Considering that several of the Bond books were published long before many of the events were exposed in the dots that have since been connected and then shown in the films, Fleming walked a narrow, dangerous path.

The Gemstone File is a conspiracy theory document attributed to Bruce Porter Roberts. In 1975, "A Skeleton Key to the Gemstone File" appeared and is generally attributed to Stephanie Caruana. The "Key" is purportedly a synopsis of Roberts' documents that presents a chronicle of interlocking conspiracies, including claims that world events since the 1950s were shaped by suppressed information, the names of supposed shooters of President John F. Kennedy, and suggested connections between a number of political assassinations which occurred within a relatively short time frame. Many of these show up in Ian Fleming's James Bond novels, and thus in the movies that followed.

The Gemstone File proposes that Aristotle Onassis, JFK's father Joseph P. Kennedy, and other prominent figures were involved in various schemes to forward a vast global conspiracy, involving the Mafia and corrupt politicians, brutal oil and drug cartels, rogue military operations, and more. It also posits that early in 1957, Aristotle Onassis had Howard Hughes kidnapped from his Beverly Hills Hotel bungalow; that Hughes suffered a massive brain injury during the forcible kidnapping, and that Hughes was subsequently a virtual prisoner of Onassis on his private island Skorpios and injected regularly with morphine, while Onassis took over the operation of Hughes's considerable financial affairs, including airlines and U.S. defense contracting. Post-Fleming author John Gardner would overtly title one of his James Bond books, Scorpius (1988). 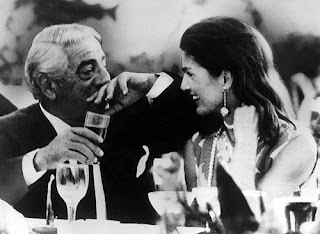 The Gemstone File portrays Onassis as the main force behind the election of John F. Kennedy as President, and subsequently, Kennedy's assassination in 1963. According to the documents, Lee Harvey Oswald was a patsy in the JFK assassination plan and was linked to the Central Intelligence Agency, and to Mafia connections in Lafayette Square, New Orleans, with Jimmy Fratianno, Johnny Roselli, and Eugene Brading as the real shooters. The Gemstone papers claim that John F. Kennedy, Robert F. Kennedy and Joseph P. Kennedy were involved with the Mafia and Onassis, and when the Kennedy brothers attempted to break away, they were murdered. We know too what happened between Onassis and Jackie O, after the death of JFK. Wild theories and thoughts, perhaps, indeed, but then when connecting dots in conspiracy speculations, when are such not radical, raging, and rough?


"On December 20, 1947, Jacob Rubenstein changed his name to Jack L. Ruby by decree of the 68th Judicial Court of Dallas, Texas. The etymology of the term 'Ruby': (French) rubis; (Spanish) rubi; (Latin) rubinus, carbuncle….The term 'Jack Ruby' was once used by pawnbrokers to indicated a fake ruby. In iconography a ruby or carbuncle symbolizes blood, suffering and death." ~ from King-Kill 33 by James Shelby Downard.

Childress writes further in his Bond analysis: "Ian Fleming [at the age of 56] died of mysterious circumstances in Jamaica on August 12, 1964, of a 'heart attack.' According to Bruce Roberts, the 'sodium morphate' used by Onassis and the Mafia made the victim appear to have died from a massive heart attack….In August of 1964…Fleming was planning to fly from Jamaica to New Jersey to meet with Ivan T. Sanderson, a biologist and former British Intelligence agent. As a zoologist, Sanderson had written a number of books, including one on Bigfoot and Yeti, and appeared frequently on radio shows and even Johnny Carson's Tonight Show."

The late Ivan T. Sanderson (a friend of mine) was a Fortean researcher and author on topics including the Philadelphia Experiment, as well, a subject about which Sanderson appears to have been corresponding with Fleming.

Childress continues, "Fleming never made it to his rendezvous with Sanderson. He died of a sudden heart attack on August 12th, 1964 at his home in Jamaica…[on] the 21st anniversary of The Philadelphia Experiment (August 12, 1943)….Was Ian Fleming killed because he knew too much about such things as the Kennedy assassination, The Philadelphia Experiment and the genesis of UFO technology?"

We perhaps shall never know, but awareness of the world may be revealed, frighteningly, more through watching Diamonds Are Forever than turning in to the nightly news, where the selling of automobiles and drive-through-hamburgers is the goal.

There has been fifty years of James Bond movies. Much is unfolded in fiction worth our attention. The 23rd Bond film, Skyfall, will be released in November 2012.

You sir are a Magi. Thankyou for the pearls.