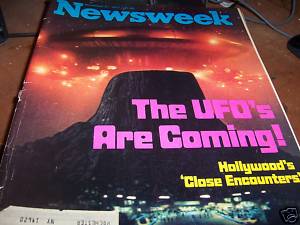 Thirty-five years ago, 1977 remains a strange one. It may have been a milestone point of change, coming on a synchromystic Jungian wave of passions and promises.

The world's first personal all-in-one computer (keyboard/screen/tape storage), the Commodore PET, was demonstrated for the first time ever at a consumer electronics show in Chicago in January 1977. Then the PETs were on sale by mid-year. On January 3, Apple Computer Inc. became incorporated.  The first Apple II computers were available for purchase later in 1977. NAVSTAR's Global Positioning System (GPS) was inaugurated by the US Department of Defense. The first MRI Scanner was tested in Brooklyn.

President Jimmy Carter pardoned the Vietnam War draft evaders, as the USA tried to move on from that extended conflict in Southeast Asia.


Star Wars opened on May 25, 1977, and became the #1 movie of the year and the then-highest grossing film of all time. Close Encounters of the Third Kind was released on November 16, 1977, and became the year's #2 film. Getting the mainstream flavor of the year, yet? Well, the # 3 movie was Saturday Night Fever and the Oscar for Best Picture went to Annie Hall. Roots was first broadcast on television.

Loren Eisely, an American anthropologist and author of The Immense Journey, died on July 9th. Then the King left the building, when Elvis Presley, 42, passed away on August 16, 1977, never showing up for the concert he was suppose to perform that night in Portland, Maine.

On May 28th, 165 people died in the Beverly Hills Supper Club fire. The New York Blackout lasted for 25 hours on July 13th-14th. The Bucharest Earthquake killed more than 1,500. A cyclone in India killed 20,000 and left 2 million homeless.

In 1977, along with Jerome Clark, I finished a manuscript entitled Creatures of the Outer Edge, which would to be published by Warner Books in 1978. It was a paperback book, tightly printed on 239 pages, being part two of our then-radical view of phenomena in terms of Jungian thought way back then. It was hailed as a breakthrough psychosocial look at a wide variety of Fortean, ufological, and cryptozoological accounts at the time. It had some missteps, but the data was great, and remains so.

The book is dedicated, "To John Keel, pioneer."

Under that, there is this quotation:


There is not wanting a feast of broad joyous humor in this strange phantasmagoria, where pit and stage, and man and animal, and earth and air, are jumbled in confusion worse confounded. ~ Thomas Carlyle.

The book was first completed and submitted in 1976, and then the publisher sat on it. Our previous book, The Unidentified had appeared in August 1975, and reportedly sold 40,000 copies. We never could understand that sales quote, because we never saw much in the way of royalties. But, hey, we were young innocents, and it was just great to have a mainstream published book. Thinking about money was hardly part of the equation.

Anyway, after that second manuscript was accepted, it seemed like it was taking forever for Warner Books to decide when to bring out that next, my second book. I was not happy with the delay and the lack of up-to-date accounts in the approved-for-publication submission, so I sent in a new ending appendix. It was entitled, "Epilogue - 1977: A Year Filled With Monsters."

On the occasion of the middle of the 35th anniversary of the content of that essay, I want to share some words from there, which seem as timely today as they did then. On pages 208-209:


The mystery animals discussed in the preceding pages have continued to creep, crawl, fly, and run through the lives of humanity. As this opus quickly approaches publication, we felt it might be interesting to give a cross-section of a few noteworthy cases of 1977: cases which, in fact, further demonstrate the meanderings of the manifestations of the phenomena.
The year was a good one for sightings of the creatures of the outer edge. Bigfoot was allegedly photographed on Mount Baker in Washington State. The 'skunk ape' was photographed in Florida, but the photographer and his photos soon disappeared. The manimals were active in such widely separated locations as Easton, Pennsylvania, and Abilene, Texas. The so-called Bigfoot of Little Eagle, South Dakota made the Halloween issue of Newsweek.


In the book's epilogue, I continued by talking of the Bigfoot-type creatures being reported in Rising Sun, Ohio County, Indiana.

The phantom felines were active in Allen County, Ohio. I detailed my interview on site with Dog Warden William Reeder. Over 57 sheep had been killed by the mystery cats, locally called Black Panthers.

I spent most of June 29, 1977, traveling with Reeder, from the Nesbaum and Burkholder farms in Richlard Township, to the Richard Etter farm on Pandora Road to the Herman Hilty farm on Lugabill Road, interviewing eyewitnesses to the mayhem, as the black cats seemed to be moving down the roads, closer and closer to Lafayette, Ohio.

Bill Reeder and two officers on the Lafayette Police Department saw the big black panther in a plowed field near Lafayette. When they came up on it, the cat was walking calmly. Then it broke for the woods and ran "150 yards in two seconds flat," said the law enforcement personnel. Click and read more on the "Fayette Factor."

Stopping to give an overview, I wrote on page 217:


1977 is shaping up as a synchronistically interesting year for the cats. 1877 saw mystery feline reports from Ohio and Indiana. During 1977, besides the Ohio events, there have been sightings in Bay Springs, Mississippi; Edwardsville, Illinois; and California, Kentucky. And as we continued our investigations into the matter of the Dover Demon of Dover, Massachusetts, word came of a maned lion's having attacked two dogs near Dover, Arkansas.

I then detailed my fieldwork in April 1977 of the Dover Demon case.

On page 225, I put the year's Lawndale, Illinois, kidnapping of Marlon Lowe in context by mentioning:


The creatures of 1977 seemed to be playing cosmic jokes on a number of people. The 'Big Birds' were at it again during the year. One of these huge things with wings attacked a five-pound beagle puppy belonging to Mrs. Greg Schmitt of Rabbit Hash, Kentucky. The 'large bird' snatched a dog from her farm and dropped it in a pond 600 yards away. While local wildlife officials argued over whether or not the dog was attacked by an American Bald Eagle, the dognapping appears to have been a dry run for something more sinister.

I overviewed the remarkable incident of the twin Thunderbirds that tried to kidnap Marlon Lowe from his front yard near Kickapoo Creek, Logan County, Illinois, in April 1977. My brother Jerry initially investigated the case. I would personally do so later on a trip to Illinois. I wrote about Lawndale, too, in that book. The case, along with many of these creatures of the outer edge from that weird year, have become part of the literature of those times.

The high strangeness of 1977, a mere 35 years ago, still fascinates me.

First appearing in 1975 and 1978, these two paperbacks were republished by Anomalist Books, in 2006, as a special double edition with a new introduction. The Unidentified and Creatures of the Outer Edge: The Early Works of Jerome Clark and Loren Coleman is a combined quality paperbound book from Anomalist Books. Near the top is the original cover of Creatures of the Outer Edge.
Posted by Loren Coleman at 11:18 PM

77 is kind of a special number. Right now I can think of that verse from Matthew:

"Then Peter came to Jesus and asked, "Lord, how many times shall I forgive my brother when he sins against me? Up to seven times?"

Jesus answered, "I tell you, not seven times, but seventy-seven times."

Seventy-Seven has the most syllables of any two-digit number in the english language.

We delved into the link between Tom Cruise and the numbers 23 & 33.

It seems there's also a connection with the number 77.

Here in the South West of England, we had the hottest summer on record in 1976 followed, in early 1977, by the harshest winter for at least thirty years.

During all this, and just a short hop across the Bristol Channel, South Wales experienced the legendary 'Welsh Triangle' UFO flap.

Tendrils of this flap reached into our region, and there was an outbreak of paranormal phenomena across Britain as a whole.

Definitely a VERY strange time for this then ten year old..!

The statement that 1977 was the harshest for the last thirty years (Unknown) show that he/she must have been away during the great freeze of 1961-62!