A Wave of Zoo Fires 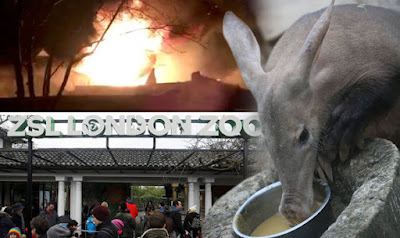 Several zoological park fires and fires near zoos/animals have occurred during the last week of 2017 and the first week of 2018. The timing seems bizarre, to say the least. And for a few people and animals, deadly. 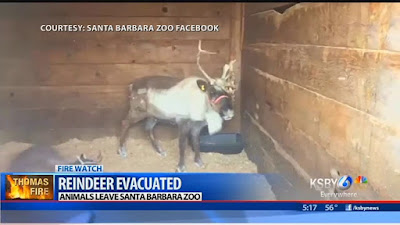 The Santa Barbara Zoo’s visit from two of Santa’s reindeer has been cut short by the Thomas Fire.
The zoo welcomed two male reindeer Nov. 22, an adult named Holiday and a first-year calf named Lightning.
On Monday, Holiday and Lightning had to return home to the “North Pole” (by way of Windswept Ranch, near Tehachapi) as the Thomas Fire continues to burn nearby. The pair were originally slated to be at the zoo through the new year. "Reindeer evacuated from Santa Barbara Zoo due to Thomas Fire," by Kaytlyn Leslie, The Tribune News, December  19, 2017. 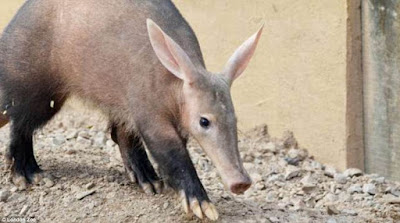 A fire that began in the Animal Adventure section, then spread to Animal Adventure Cafe & Shop in the Outer Circle of the London Zoo, near Regents Park, killed Misha, an aardvark and four meerkats, on December 23, 2017. 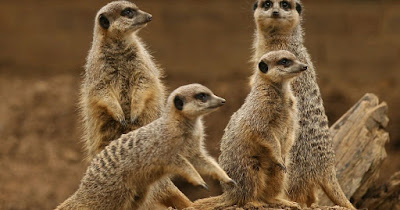 About 70 firefighters tackled the blaze at its height in the Animal Adventure section....
One person was taken to hospital and eight were treated at the scene.
The zoo said an aardvark called Misha died in the fire and four meerkats were still unaccounted for, presumed dead. "London Zoo fire kills aardvark and meerkats," BBC News, Dec. 23, 2017.


A century ago, they came from Italy — Belmont was where chandelier makers, tailors and the workers who built the Bronx Zoo, just a block over, raised their children. These days, more of the young people zipping by on scooters or walking to class at the public school around the corner have families with roots in Puerto Rico, Jamaica or West Africa.
When a fire tore through one of the buildings late on Thursday [December 28, 2017], killing 12 people, children were at the heart of the tragedy that has shaken the neighborhood. The fire was started by a 3-year-old boy playing with burners on a stove, the authorities said. The youngest victims were 8 months, 2 years and 7 years old. ~ "In Fire-Scarred Bronx Neighborhood, a World of New Arrivals, Children and Community," by Rick Rojas, New York Times, Dec. 30, 2017 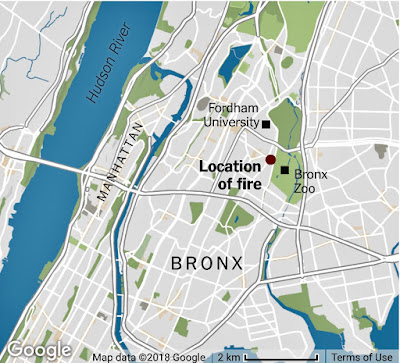 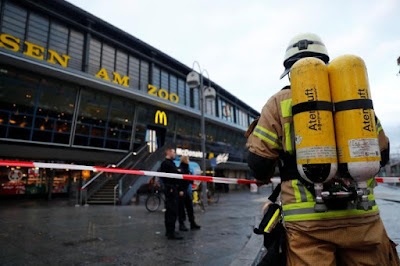 At least one person was reported injured and hundreds evacuated after smoke poured out of the [the zoo train station] buildings.
The fire broke out at the Zoological Gardens station in Berlin, Germany — adjacent to the park.
It is one of the most important public transport junctions, and a mass evacuation was carried out according to a police spokesman.
German media showed smoke billowing out of the train station, just yards from the site of the deadly Christmas market attack in December 2016. "Casualties reported in zoo blaze horror," Anthony Blair, Daily Star, Dec. 31, 2017. 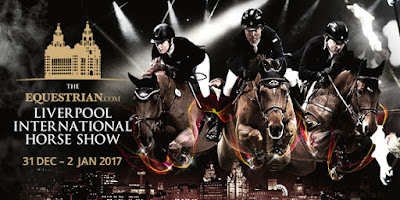 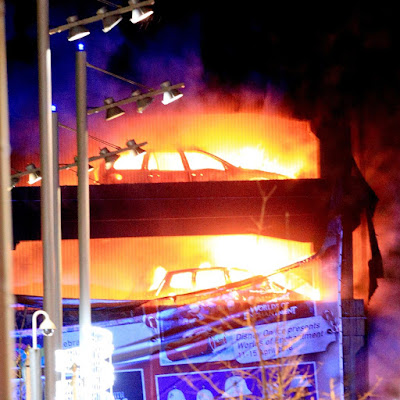 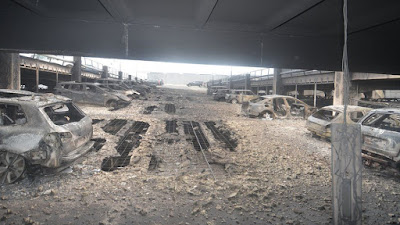 A fire destroyed all cars in a 1,600 capacity multi-storey car park next to the Echo Arena in Liverpool, on Sunday, December 31, 2017. The fire started on the third level; the horses were on the first level and all were evacuated safely.

The Liverpool International Horse Show was cancelled as firefighters tackled the huge blaze next to the venue on Liverpool's waterfront. No injuries to any horses or people were recorded. 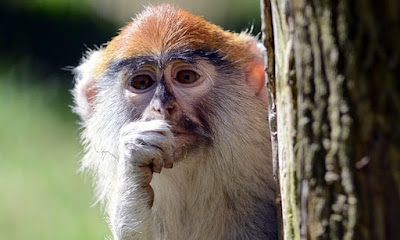 Thirteen monkeys have died in a fire at Woburn Safari Park in Bedfordshire, [in the UK] believed to have been sparked by a faulty generator.
The blaze started in the patas monkey [Erythrocebus patas] house within the drive-through enclosure of the park in the early hours of Tuesday [January 2, 2018]. It was spotted by security guards on a routine patrol and three appliances from the Bedfordshire fire brigade attended. "Fire Kills 13 Monkeys at Woburn Safari Park," The Guardian, Jan. 2, 2018.

A dozen people were hurt, though all are expected to be OK, as a six-alarm fire swept through a multistory building near the Bronx Zoo early Tuesday [January 2, 2018], drawing more than three dozen fire units and 150 firefighters to help battle the flames.

The 5:30 a.m. fire broke out in a tin-roof furniture store, where the gates were down, on Commonwealth Avenue in Van Nest and rapidly spread up to apartments in the mixed-use building. More than two hours later, flames were still raging. ~ "9 Children Among 23 Hurt as Another Inferno Devours Building in the Bronx," by Tracie Strahan, NBC New York, Jan. 2, 2018. 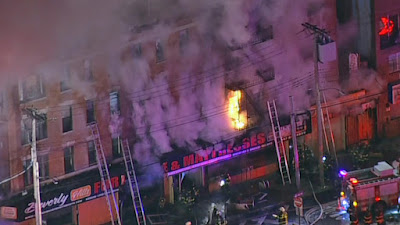 More than three dozen units and 150 firefighters are battling a massive fire inside a building near the Bronx Zoo, according to the FDNY. Chopper4-NBC New York 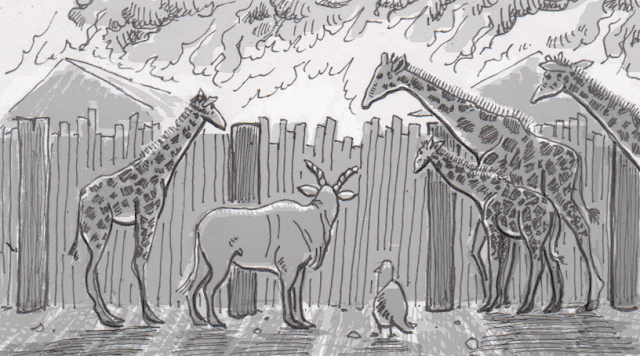 Drawing of giraffes and an eland watching a fire near the Oakland Zoo, March 2017.

Posted by Loren Coleman at 7:57 PM

Here in OKC, our zoo - which was once home to "Tusko" the elephant, until MK-ULTRA "doctor" Jolly West dosed him with so much LSD that it killed him in '62 - we have had a number of high-profile animal deaths. No fire involved, that I know of, but still ... and just last week, Kiara, a rare snow leopard, died of a respiratory illness. Also reminds me of that episode of "Kolchak: The Night Stalker" where an alien force attacks animals at the Lincoln Park Zoo in Chicago, taking their bone marrow.

These Zoo fires follow a spate of Zoo-related items in popular culture, James Patterson's 2012 dystopian novel "Zoo" inspired a TV show on CBS running from 2015-2017. Zoo's theme of mysterious animal attacks on humans was chillingly linked to the 2016 death of Lane Graves at Disneyworld, the child who was attacked by an alligator during an outdoor screening of the animated film "Zootopia".