On October 1, 2017, a gunman shot at the Route 91 Harvest Festival country music concert - with 22,000 audience members - in Las Vegas. The death toll was 58 people killed, over 500 injured, plus the suicide of the gunman. Police report the shooter, Stephen Paddock, 64, of Mesquite, Nevada, who was holded up on the 32th floor in the Mandalay Hotel, died by suicide. The setting was bizarre, next to the Luxor Casino and Hotel, with its Sphinx and Pyramid in plain view. 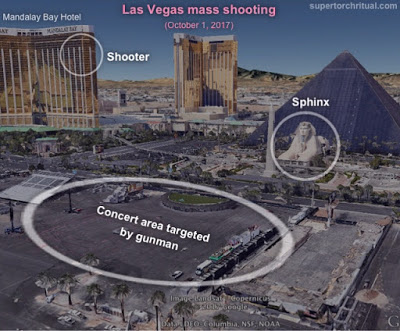 As of mid-January 2018, the event is still discussed, and syncs are being revealed as they come into people's awareness. 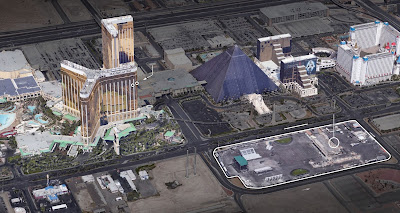 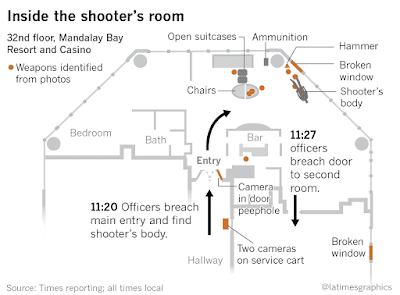 As some have noted, Blade Runner 2049, which was released widely in the US on October 6, 2017, the Las Vegas shooting impacted earlier openings. Blade Runner 2049 premiered on October 3, 2017 at the Dolby Theatre in Los Angeles, although following the 2017 Las Vegas Strip shooting, the red carpet events were cancelled prior to the screening. 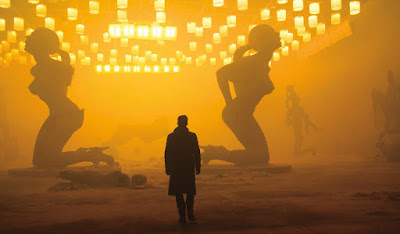 One of the surprises of Blade Runner 2049 is that the character Rick Deckard (Harrison Ford) is not in the wilderness of the North, but instead is living in the ruins of Las Vegas, after a nuclear event. He is tracked there by agent K.

Another movie, Kingsman: The Golden Circle, which came out around the same time as Blade Runner 2049 had a Las Vegas link too.

During the movie [Kingsman: The Golden Circle] they were at a concert/festival with a pyramid in the background. Source


20th Century Fox originally scheduled Kingsman: The Golden Circle for a summer release date of June 16, 2017 but pushed the film back to October 6, 2017. The film was then moved up to September 20 in the United Kingdom and September 22, 2017 in the United States likely to avoid competition with Blade Runner 2049. The film had an IMAX release.

The code the drug dealer gives the Kingsman at the end of the movie, to save the millions of infected people was: "Viva Las Vegan." Source

‘Viva Las Vegas’ celebarates Vegas, a place of pleasure, where, commonly, you will find a lot of drug and alcohol use, strippers and gluttonous behaviour. All these things are unhealthy and can be dangerous. By using the phrase ‘Viva Las Vegan’ Poppy presents a juxtapositon, as veganism is associated with celebrating healthy eating, being anti -hypocritcal and compassionate. Therefore, perhaps Poppy’s message was that we celebrate the wrong things in society and we should be focussing on being less hypocritcal with our actions. After all, her life ended on a high and this could be owing to the fact she accepted her own hypocracy.
...it was actually the phrase ‘viva las vegan’ that saved humanity. Coincidence? I THINK NOT. Source.


The expression "Viva Las Vegan" is associated with Las Vegas casino owner Steve Wynn, as noted in this 2010 articles, here and here. 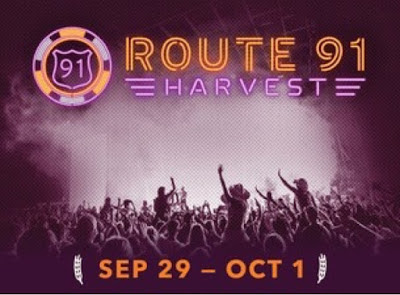 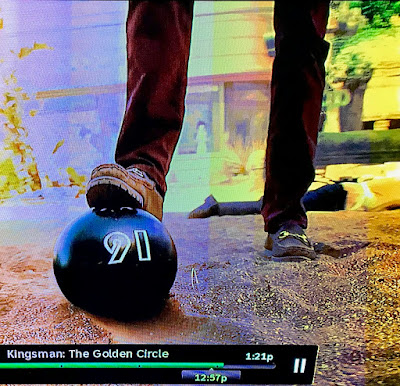 Near the end of the movie I noticed the number 91 on the black bowling ball. It reminded me of the 91 logo on the Vegas Route 91 festival signs. Source.

The trivia is intriguing:


During the final fight between Eggsy and Charlie, Charlie picks up a bowling ball numbered '91,' which references 1991 as the fictional birth year of Eggsy.

Dr. Tyrell is the MIB.
Rick Deckard and Roy Batty are us.

For whatever the additional sync is worth, a quarter is 91 days and a third, and the Kingsman movie was released on 20 Sep, which is on the autumn equinox. Equinoxes and solstices divide the year into quarters.

These bastards the MIB, so-called men in black, are able to influence people with subliminal impulses,
among other things, using unstable people to do their dirty work to silence or interfere with or sabotage people who investigate anything to do with UFOs or other dimensions.
'Mothman' for example was a human-pterosaur or human-bird/-dinosaur hybrid (see: Rapanui) that inhabits a parallel dimension to ours that is in the Aptian age of the Cretaceous. This connects with the pyramids on Mars and the fact that we humans on Earth are related to the people who inhabited Mars during the Aptian, as both groups of us were put here and interbred with the naturally evolved humans of Earth, by the ancestors of the MIB, on account of our being created as genetically modified warriors with the 'aggression genes' such as MAOA and/or 5-HTTLPR.
The reason for your 'bad luck' and illnesses, etc, related to writing on certain topics, Mothman in particular, is these MIB.
They are still around using every dirty trick they can to prevent us from finding out the truth about our origins, about them and about the other more benevolent 'aliens' including a group from which these malicious ones splintered who were our forefathers and e.g. instructed the building of the pyramids in Egypt and Mexico.
Another benevolent group of so-called aliens are the survivors of Mu who inhabit Agarte/Agharta/Agharti in Asia.
The last thing they want is for us to know the truth about our origins in the direction of Sirius as genetically modified warriors, symbolically the 'replicants' of Blade Runner, to them being Dr. Tyrell.
They created us because they had become incapable of aggression and thus self-defence, but we got out of hand due to our tendency toward aggression and psychopathy. Thus the government there decided to exterminate us, but a group of them spirited us away to his solar-system. Unfortunately, some of them decided also to become hostile toward us, at least toward us knowing anything about our origins, and a small group of such people, to this day, continue to interfere in researches of anything related to this. The so-called men in black. The MIB.
They collapsed the Silver Bridge to intimidate witnesses to the 'Mothman', among other things. They try to drive people insane or make them paranoid through such illusory prophecies and through bizarre persecutions, followings, through activating emotionally unstable or psychotic people, etc. They also try to get such people to kill or harm researchers. They are very dangerous and foolish people. Thankfully the majority of these 'Sirians' are not so malevolent, but this small group of criminals, the MIB, unfortunately are. They number under 100 as far as I know.
But some of these coincidences possibly relate to them and their interference in our evolution, space-exploration, research of paranormal and alien matters, etc.
These coincidences are created by the spiritual intelligences in order to guide or warn us about the direction we are headed.
This suggests many things, such as our disruption of the climate, etc, but seems indeed related also to the MIB matter
from the multiple angles that a) they are hiding the truth from us and b) our aggression, programmed into us by them, is once again bringing about our self-destruction, particularly around and after the years 2028 - 2029.

Loren, re the Las Vegas Shooting and SF synchs, I mentioned this (below) on October 5th last year at the Secret Sun blog, and it is worth repeating here. So I copy and paste up that comment of mine from there (a little edited):

...this mass shooting took place on October 1st. 'October the First Is Too Late' is the name of a famous science fiction novel by one of the 20th century's most famous astronomers, Fred Hoyle. Check this wiki article for an overview of the themes of the book (published in 1966). Albeit the article has its shortcomings, there should be a better overview from a SF specialist site. I read the novel decades ago btw.
https://en.wikipedia.org/wiki/October_the_First_Is_Too_Late

The themes of this novel include time travel, the sun's radiation (Hoyle made important discoveries on the nature of the sun's nuclear fusion) and the collapse of civilization. It is a novel notable for presenting the pigeon-hole theory.

From the wiki article (the background here is the characters John Sinclair and Dick, who are both the protagonists in the novel. They are seemingly traveling back and forth through time):

'He considers each moment of time as a state represented by a pigeon-hole; the sequence in which they might be accessed might not be in time sequence. "A sequence is a logical concept in which time doesn't really enter at all," he says. "... Our consciousness corresponds to just where the light falls, as it dances about among the pigeon-holes... What is this light? ... My strong hunch is that it's the spot of light that permits decisions which lie outside the laws of physics." He considers that there might be more than one set of pigeon-holes, but only one light. "For every different person, you need a separate set of pigeon-holes. But the consciousness could be the same."

'John thinks that their new situation, a world made of parts of the old world, might be due to a new set of pigeon-holes, made of some of the pigeon-holes in the other system.'


As I pointed out at the Secret Sun, the morning of October the 1st, I woke up and thought today is October the 1st; and the association with Hoyle's novel popped into my head, and I thought well October the 1st is too late. Too late for what this year, I contemplated. In of course a light-hearted way, because I had no idea what was to happen mere hours later! In the shocked aftermath of the shooting I completely forgot about this synch, and it only occurred to me a few days later (October 5th). I'm surprised it hasn't been noticed more in fact.

A judge on Tuesday unsealed nearly 300 pages of search warrant records, including one document that publicly identified for the first time an additional “person of interest” in the Oct. 1 massacre on the Las Vegas Strip.

“Until the investigation can rule otherwise, Marilou Danley and Douglas Haig have become persons of interest who may have conspired with Stephen Paddock to commit Murder with a Deadly Weapon,” according to the Metropolitan Police Department document, which was prepared in October.

Danley was Paddock’s girlfriend and initially was named as a person of interest in the investigation. Haig, whose name had not been previously released, could not be reached for immediate comment Tuesday.