(If you are looking for updates on post-July 20th copycats, please see: Aurora Copycat Effect: The Complete List.) 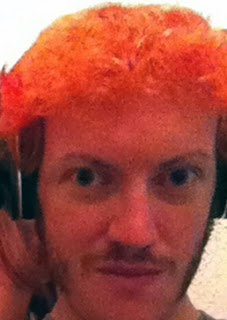 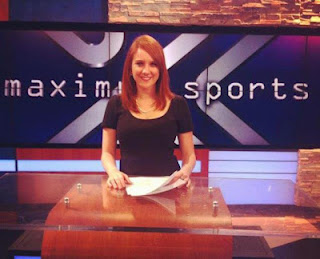 One of the first victims of the Aurora shootings identified was Jessica Ghawi, an aspiring sportscaster, who happened to almost have been shot during Toronto's Eaton Mall shooting. She also used the name "Jessica Redfield," a name she created because of her red hair, as she said people remembered that name more easily, since "Ghawi" is difficult to pronounce.

The following essays were first posted in January and March, 2009. They have been moved to the top, in the wake of the Aurora events of July 20, 2012. This is due to the "media reportage" that the shooting suspect James Holmes said "I am the Joker" when he was arrested. Whether that is a fact remains to be proven. The notion it is now a cultural "factoid" cannot be avoided. 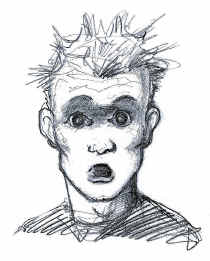 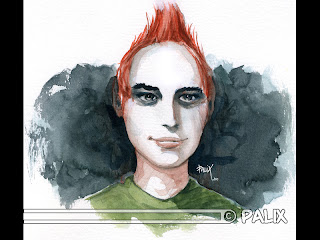 The first drawing and a later colored one, via eyewitness descriptions, of 2009's Dendermonde Joker.

The 20-year-old accused daycare baby killer Kim de Gelder is a big fan of movies, but sat on suicide watch after his capture. The Dark Knight re-opened around the world on Friday, January 23, 2009, on giant IMAX screens everywhere.

De Gelder has been variously described by former workmates as a "film freak" and "movie addict."

Joker copycats did show up before de Gelder, but the couple of incidents picked up by the media in 2008 were actually minor in nature.

Talk of a Dark Knight curse has certainly been in the air from the beginning. The Dark Knight is dedicated to both the 28-year-old Heath Ledger, who died of an accidental overdose on January 22, 2008, and Conway Wickliffe, 41, a stunt supervisor who died in a freak accident in London while setting up a car crash. Other weird deaths have been associated with the film.

On September 1, 2008, in Johannesburg, Morné Harmse, an 18-year-old pupil in his high school in South Africa allegedly killed a fellow student with a sword and then hacked up three others. Harmse wore a clown mask and carried other masks supposedly inspired by the group Slipknot. The key to our examination here is that the killer also spoke in a voice to mimic the Joker in The Dark Knight.

Thus, the level of violence of the Dendermonde Joker is acknowledged as way above all previous examples for individuals more closely mirroring The Dark Knight's Joker.

The two specific costumed Joker arrests before the Belgium stabbing attacks mostly went unnoticed because they were so mild by comparison.

In July 2008, Boing Boing told of a Joker copycat who had been arrested.

Detective Mike Mohney stated at the time that 20-year-old Spencer Taylor (above) of Three Rivers, Michigan, had been booked for investigation of larceny and malicious destruction of property. Mohney says officers who were dispatched on that early Sunday morning of July 27, 2008, to the theater to find employees restraining a man wearing a purple suit, a green wig and face paint in the style of Batman's nemesis in The Dark Knight.

On August 14, 2008, the local media in Michigan followed up by declaring that Taylor had been sentenced.

Taylor pleaded guilty to a misdemeanor charge of malicious destruction of property. Police from Three Rivers, Centreville, Michigan, said that Taylor wore a purple suit, green wig and face paint like the Joker when he was arrested for attempting to steal the big Batman movie poster.

Spencer Taylor was sentenced to one day in jail, 16 hours of community service and fined $685. Other charges were dropped when Spencer Taylor agreed to do a plea deal.

The Joker copycat incident in Arizona around Halloween was a bit more dangerous.

A 16-year-old Palo Verde High School student was rushed to the hospital Friday, October 31, 2008 (Halloween) for serious but not life-threatening injuries after what authorities described as an accidental stabbing by a classmate.

The injuries occurred during lunch while the student, a junior, horsed around with a freshman friend, said Ross Sheard, high school chief academic officer for the Tucson Unified School District. The 15-year-old jumped on the older student's back, causing two puncture-type wounds to the older boy, Sheard said.

Classmates said that the student who accidentally stabbed his friend was dressed up like the Joker from the Batman movie The Dark Knight, and that dressing that way was not uncommon for him. He often goes by the nickname "Joker."

"It was not a fight," he said. "It wasn't kids being knock-down, going after each other. It was horseplay that got out of control."

Afterward, the students apparently made their way to the office and asked for help, he said. About an hour and a half later, officials tracked down the knife that was used in the incident, Sheard said.

The 15-year-old had a total of three knives in his pocket — two kitchen knives and a hobby knife — and is facing charges of carrying the concealed knives, but not aggravated assault, said Sgt. Mark Robinson, a Tucson Police Department spokesman.

Sheard said it was too early to say what might happen to the 15-year-old student, but the district has a zero-tolerance policy against weapons on campus.

"We're not sure how serious the injury is," Sheard said. "There was bleeding. That was the part that had everybody very concerned."

Robinson said later that the student was undergoing surgery at a local hospital.

Many students were in costume on Halloween, he said, which caused some added confusion on campus.

A soldier dressed and wearing face-paint like Batman villain The Joker was shot and killed by police on March 8, 2009, in the Shenandoah National Park after he pointed a loaded shotgun at them after a chase, an FBI affidavit says. The incident occurred near Front Royal, Virginia, according to the Associated Press. 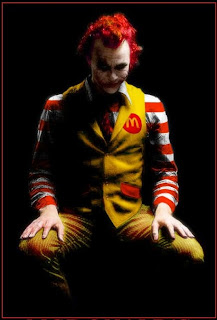 Back in 2009, I asked: "Have there been other copycat incidents since The Dark Knight appeared?"


The correct question should have been about "when"?


"I, like God, do not play with dice and do not believe in coincidence."
and
"There are no coincidences...only the illusion of coincidence." ~ V, V for Vendetta, 2005.
Posted by Loren Coleman at 8:23 AM

Since we're in the subjects of "connections,"---I wonder if these supposedly "random" events can be tied "definitely" to the famous Clown Scares of almost 30 years ago? Hmmm... Probably not, but one can't help but wonder...

I think it is unfortunate that the media does not make these "connections," and even tries to discourage thinking about the possibility that connections exist.

Like I stated some posts ago, I did not hear the Media over here (at least CNN) state that the perpretator was dressed in Joker-style clothing.

The clown/joker connectection is very interesting. Also, the perp's name Holmes after several weeks of Katie Holmes is interesting as well. Anything about the name Holmes besides the obvious Sherlock connection?

Also, with all the recent scuttle about the sun's intense CMEs last week - Aurora flew out at me. The aurora borealis is more intense during these sun explosions.

Thanks again and keep writing!

Jesus, I used that McDonald's Joker image just this week in one my blogs, which was totally unrelated to this. Or at least SEEMINGLY unrelated...

From Bill Somerset PA,
Please note: the shooting and showing of movie occurred on the Eve of the First day of the Fifth month in the Hebrew, Jewish, Biblical calendar, the month of Av. This was a New Moon day and , of course, the Darkest Night.
Your mention of Mitt Romney (down page) should cause us to look forward to his trip to Israel. Apparently, he will be there on the historic date commemorating the destruction of the Jerusalem Temple on the Ninth of Av (or "Tenth" - Jeremiah 52:12). Any Masonic/Mormon connections?
Here is a news cut:
www.israelnationalnews.com/News/News.aspx/157846

"Romney to Break Fast of Temple Mount Mourning with Netanyahu"
"Romney’s visit to Israel on the fast day mourning the destruction of the Holy Temples shows his insight on Israel, says campaign adviser.
"Politico confirmed the Standard’s assertion that an advisor to Prime Minister Binyamin Netanyahu actually suggested the date, two days after Romney’s scheduled appearance at the Olympic Games in London."

Aurora means Dawn and Colorado means red in Spanish. http://en.wikipedia.org/wiki/Red_Dawn the movie is about citizens in Colorado taking up arms against commies. Their militia is called the Wolverines. According to http://reut.rs/O2eKoD Holmes high school soccer team was called the Wolverines and his number was ... 16.

Did anyone notice that Hope was mentioned at least 3 times, subliminal for Obama campaign, or that Bain the arch enemy was the name of Mitt Romney old company, its difficult to prove, but something besides entertainment is going on,

The flaming red hair reminds me of Loki the Trickster, a Norse god...I know you've talked about the Norway connection, Loren.