I was reading Matthew Bell's blog, "Keystone Kops" today, enjoying his extension of the linkages made to the Gateway Arch and Ferguson's police-related items.

Looking at Darren Wilson's photo there, one I've seen often before during November, I noticed for the first time something intriguing about Darren Wilson. The famous/infamous police officer has an incredibly accentuated "widow's peak," especially emphasized with his reclining hairline. Some names for the "widow's peak" link back to a mourning cap or "Mary Stuart Cap."

Widow's peaks are a symptom of Donnai-Barrow syndrome, a rare genetic disorder caused by mutations in the LRP2 gene. Could Darren Wilson have some minor problems with his eyesight or hearing? 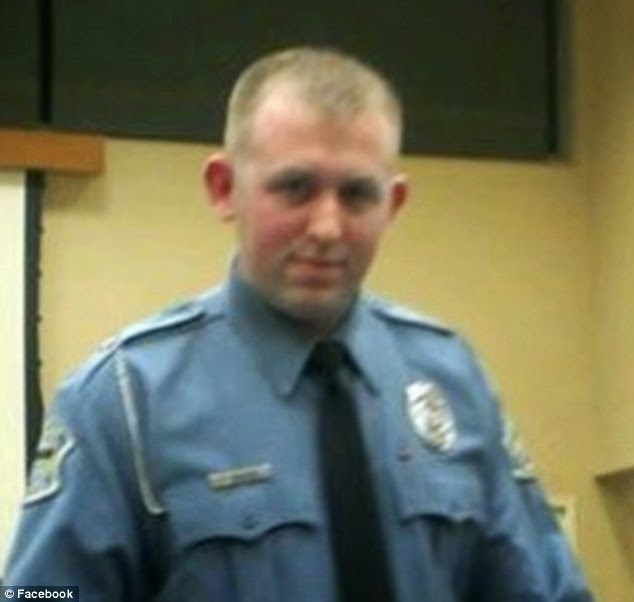 A widow's peak is a V-shaped point in the hairline in the center of the forehead....The term stems from the belief that hair growing to a point on the forehead – suggestive of the peak of a widow's hood – is an omen of early widowhood. The use of peak in relation to hair dates from 1833. The expression widow's peak dates from 1849. Source. 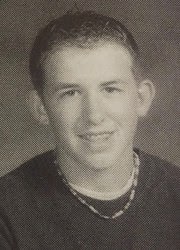 Darren Wilson is shown here as a sophomore in the
2002 St. Charles West High School yearbook. 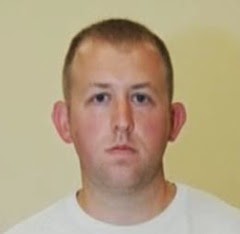 Darren is of Irish and Gaelic origin, and the meaning of Darren is "great."

Darren Wilson, the Ferguson police officer (now retired) is neither a widow (yet) or a widow's son, as far as any information discovered to date has revealed. What Wilson does appear to have been is the son who has experienced his mother's mysterious death, when he was 16 years old.

His mother, Tonya Durso, allegedly was a woman described as a "serial con artist who defrauded thousands of dollars from neighbors in stolen credit card scheme."

Wilson was born in Texas in 1986 to Tonya and John Wilson, and he had a sister, Kara. His parents divorced in 1989, when he was 2 or 3 years old. His mother then married Tyler Harris, and they lived in Elgin, Tex., for a time, records show. Tyler and Tonya Harris had a child named Jared. The family later moved to the suburban Missouri town of St. Peters, where Wilson’s mother again got divorced and married a man named Dan Durso, records indicate.


In 2001, Wilson's mother pleaded guilty to six counts of forgery and one count of stealing at the 11th Judicial Court in St Louis. She did not serve any time in jail and went into bankruptcy in October 2002. The following month she died.

One of the Masonic signs of distress is the holding up of your arms, a gesture that has been often discussed in the Michael Brown shooting. Did Brown have his arms up? Down? To the side? How? Clearly, the universal sign of surrender and distress is with the hands and arms up.

A specialized verbal distress signal is "Oh Lord, my God, is there no help for the widow's son?"

Some speculate that the Mormon leader's Joseph Smith's final words, "O Lord, my God!" was a cry for help, in the Freemasonry tradition, at the Carthage jail, as he was being shot.

Those who knew Joseph Smith believed that his use of the phrase "O Lord, my God!" was an attempt to save his life and the life of his friends by calling out to Freemasons in the mob. (Joseph and the other Mormons in the jail were Masons, Joseph himself having been inducted on 15 March 1842.)
Among the brotherhood of Freemasons, there is the Grand Hailing Sign of Distress: "Oh Lord, my God, is there no help for the widow's son?" According to Masonic code, any Mason who hears another Mason utter the Grand Hailing Sign must come to his aid.
Most adult men in Hancock County, Illinois, were Masons, and there were Masons in the mob that attacked the jail. If Joseph was attempting to give the Grand Hailing Sign, they would have been obligated to stop their attack and defend Joseph, Hyrum, John Taylor, and Willard Richards. Source.

What is the Widow's Son?

In Ancient Craft Masonry, the title applied to Hiram, the architect of the Temple, because he is said, in the first Book of Kings (vu, 14) to have been "a widow's son of the tribe of Naphtali." The Adonhiramite Freemasons have a tradition which Chapron gives (Nécessaire Maçonnique, page 101) in the following words: "The Freemasons call themselves the widow's sons, because, after the death of our respectable Master, the Freemasons took care of his mother, whose children they called themselves, because Adonhiram had always considered them as his Brethren. But the French Freemasons subsequently changed the myth and called themselves Sons of the Widow, and for this reason.
'As the wife of Hiram remained a widow after her husband was murdered, the Freemasons, who regard themselves as the descendants of Hiram, called themselves Sons of the Widow."' But this myth is a pure invention, and is without the Scriptural foundation of the York myth, which makes Hiram himself the widow's son. But in French Freemasonry the term Son of the Widow is synonymous with Freemason.
The claim has often been made that the adherents of the exiled House of Stuart, seeking to organize a system of political Freemasonry by which they hoped to secure the restoration of the family to the throne of England, transferred to Charles II the tradition of Hiram Abif betrayed by his followers, and called him the Widow's Son, because he was the son of Henrietta Maria, the widow of Charles I. For the same reason they presumably subsequently applied the phrase to his brother, James II. - Source: Mackey's Encyclopedia of Freemasonry


The widow's peak, a/k/a "Mary Stuart Cap," and widow's sons, linked to the House of Stuart, gives one pause about the role of Freemasonry in the background, symbolically, of Ferguson's melodrama - one of distress and death. 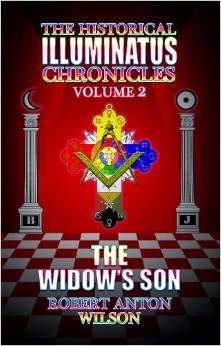 McQuilliams -> More on Son of William

Posted by Loren Coleman at 7:45 PM

I want go into detail, but Ive become intrigued with the green connection
Concerning Ebola ( as I believe that everything is connected which includes Ferguson , which I believe is part of a much Bigger puzzle ) I decided to re view Pharnell Williams video of Happy ( again looking for the green connection) because I believe that Pharnell’s archetypical role in the ‘agenda’ is one of ‘the fiddler’or Pied Piper.
In his video Happy, there is much green symbolism ( along with Yellow, but thats an obvious choice since the song is about optimism ) . Also, and this is the intriguing Ferguson connection, There are many many scenes of the ‘hands up’ profile. Three scenes is of Pharnell walking across a bridge with a very very unusual design and remined me of not only a sun burst, but also obvious of an arch.

Widow's son = Horus, born of the dead Osiris and his widow, Isis.
Note: ISIS.
Who will be her child?