Tom Benson, 3rd UFO Researcher To Die In A Week 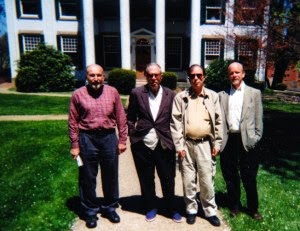 
Tom apparently passed away on Tuesday, December 2, 2014, from pneumonia following complications from colon surgery in September.

(Benson is pictured above, on the left, with ufologists Jim Moseley, Antonio Huneeus and David Houchin.) 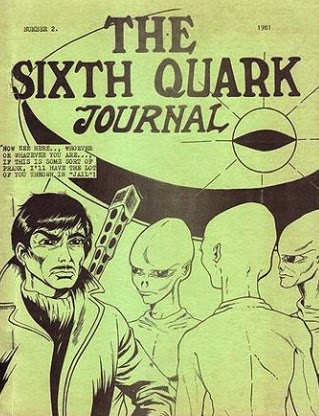 Benson, during the 1980s, was the editor of the zine, The Sixth Quark Journal. Above is Number 2 for 1981, which Benson self-published from his hometown of Trenton, New Jersey.


Benson worked for the State of New Jersey as a personnel management analyst, as well as a sideline selling vintage UFO books.

Tom Benson was deeply involved with field investigations in New Jersey, and then presenting his research results at conferences, when our paths overlapped.

One presentation of Benson's has been used in various field manuals throughout ufology. It issued from his personal investigations of an alleged UFO landing case from September 1986. The insightful paper he gave at the MUFON Symposium at American University in 1987, was entitled, "Misinterpretation of Slime Molds as UFO Physical Trace Evidence." 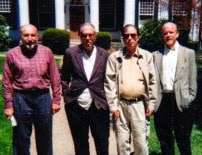 Tom Benson is the third UFO-related researcher/writer to have died recently.

Now Tom Benson joins the list of those who have written about ufology in the past, who have died this fall.

Reading of these men's deaths have revealed surprise as to where their lives took them.

Patrick Huyghe, author of Swamp Gas Times, and publisher of Anomalist Books, writes: "I remember Wes Nations and Crash Collusion; I used to exchange zines with him. I never knew about his Vagabond identity though.​ He was a cool guy. Sad to lose him at just a young age."

Jerome Clark, author of The UFO Book, emails: "I used to know Rocky Wood many years ago but had since lost touch with him. He was a nice guy. I'm sorry that he suffered and died too soon."

Others have mentioned that they "did not know that Rocky Wood was an expert on Stephen King."

Condolences to their friends, family, and loved ones.


Thomas Anthony Benson Jr Obituary
Date of Birth:
Monday, September 13th, 1937
Date of Death:
Tuesday, December 2nd, 2014
Funeral Home:
Brenna-Cellini Funeral Homes
2365 Whitehorse Mercerville Road
Hamilton, New Jersey, UNITED STATES
08619
Obituary:
Thomas Anthony Benson, 77, of Ewing Township, New Jersey, passed away surrounded by his loving family on December 2, 2014 at the University Medical Center of Princeton. Born in Manhattan, New York, he had resided in Ewing for most of his life. A U.S. Army veteran, he was educated at Trenton Boys Catholic, Mercer County Community College, and Rutgers University. He received his Masters in City and Regional Planning, graduating cum laude from Rutgers University. Thomas retired after 35 years of service as a personnel management analyst with the State of New Jersey, Department of Personnel. A good father, he was instrumental in sparking his daughter Marisa’s interests in diplomacy, and the arts and his son Alan’s interests in soccer, as well as in rocks and minerals.
Throughout his adult life, Tom had an abiding interest in Unidentified Flying Objects (UFO’s). He taught a course at the local high school on ufology. He served as State Section Director and Investigator for the Mutual UFO Network (MUFON). In the late seventies, he founded a UFO study group for the scientific study of UFO’s. Tom traveled extensively to present talks, participate, and sell books at many UFO conferences, including MIT and the American University. In the eighties, Tom published his UFO magazine the Sixth Quark Journal. Once at the National UFO Conference (NUFOC) he was awarded the honor of Ufologist of the Year. He was a member of the New York Fortean Society.
He loved folk music, especially the tunes of Pete Seeger. A social activist, Tom marched with Martin Luther King for freedom. He was an avid collector of Christmas and Halloween decorations, and was known by family, friends, and neighbors for his magical displays. As a book dealer, he enjoyed selling books online through ABE Books. Tom was a master gardener and helped begin the Ornamental Horticulture Program at Mercer County Community College.
Tom was a courageous, competent and compassionate person with high moral values, and will be deeply missed by all who knew him.
Son of the late Thomas A. and Ann (Shestko) Benson; he is survived by his wife, Melanie; his daughter, Marisa; son, Alan; sister, Susan; two sisters-in-law, Eileen and husband Jack Simzak, and Susan Miller; niece, Nancy Miller, and nephews, Andrew and Stephen Miller.
A Mass of Christian Burial will be celebrated Friday, December 12, 2014 at 10:30 am at Incarnation Church, 1545 Pennington Rd., Ewing, NJ. Cremation will be private. Calling hours will be held Thursday from 5 to 8 pm at the Parkside Brenna-Cellini Funeral Home, 1584 Parkside Ave., Ewing, NJ 08638. In lieu of flowers, memorial contributions may be made to Mercer Street Friends, 151 Mercer St., Trenton, NJ 08611 or Isles, Inc., 10 Wood St., Trenton, NJ 08618. Please visit Tom’s tribute page at www.brennacellinifuneralhomes.com
Brought to you by:  Brenna-Cellini Funeral Homes

(Thanks to George P. Hansen and Patrick Huyghe for the initial news, plus T. Peter Park for the link to the formal obit.)

The following are the links to my remembrances for the three ufology researchers/writers who died in one week (November 25 – December 2, 2014):

Posted by Loren Coleman at 3:45 PM

Rest in peace to all 3 of them.

Cool artwork on that 'zine. The UFO looks very Socorro-like --especially the tripod.

Well now they shall know the truth.

I just learned today, 8/26/2015, that Tom Benson had passed away in early December of 2014 and was deeply saddened by the news. I knew him quite well during the '80's and often visited him and his wife at their home in Trenton, NJ. He had one of the largest private collections of UFO books and he gave me free access to it for my own research into ufology. The material he provided enabled me to publish my own UFO Journal ("AURA") which was the foundation for three later books on the subject.