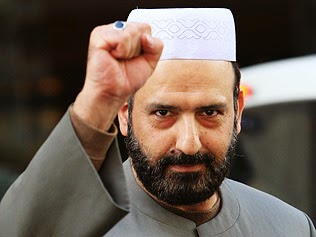 The siege in Sydney is over, with the alleged gunman Sheikh Haron dead, and some of the hostages, apparently, as well. Seventeen hostages were involved. Two hostages died and the gunman too. One police officer was slightly injured.


I posted last night on the "Oz's Lindt Chocolate Cafe Hostage Situation." This is an update of the situation.

The situation seemed to be getting to a dangerous point of no return. Gun shots were heard. One of the hostages (allegedly) had made signs "running her thumb across her throat" in a chilling gesture during the Martin Place siege.

Held up in the window was a specific flag seen before. 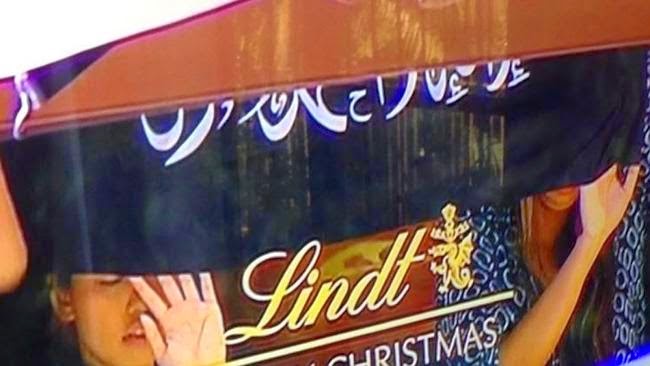 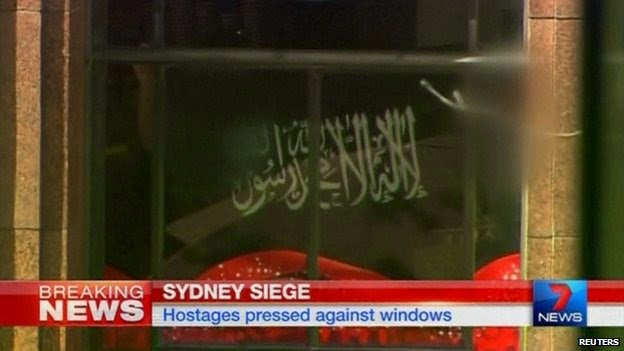 The black flag used bore the white Arabic text of the "shahada," the basic statement of the Islamic faith. It is used by jihadist groups worldwide. The statement on the flag translates as, "There is no God but Allah, and Muhammad is his messenger."


The black flag was the battle flag of the Prophet Muhammad and was carried into battle by many of his companions. 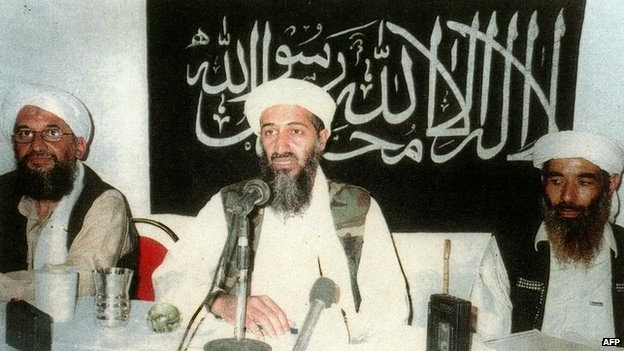 Gunfire could be heard in the vicinity of the cafe in Sydney. Reportedly, seven people have have been shot, and, at least, two have died.

The man who has held hostages in a Sydney, Australia, cafe for nearly 16 hours was Man Haron Monis, and he is reported to have been killed in the exchange.

For that, Haron received 300 hours of community service, the Weekend Australian reported. 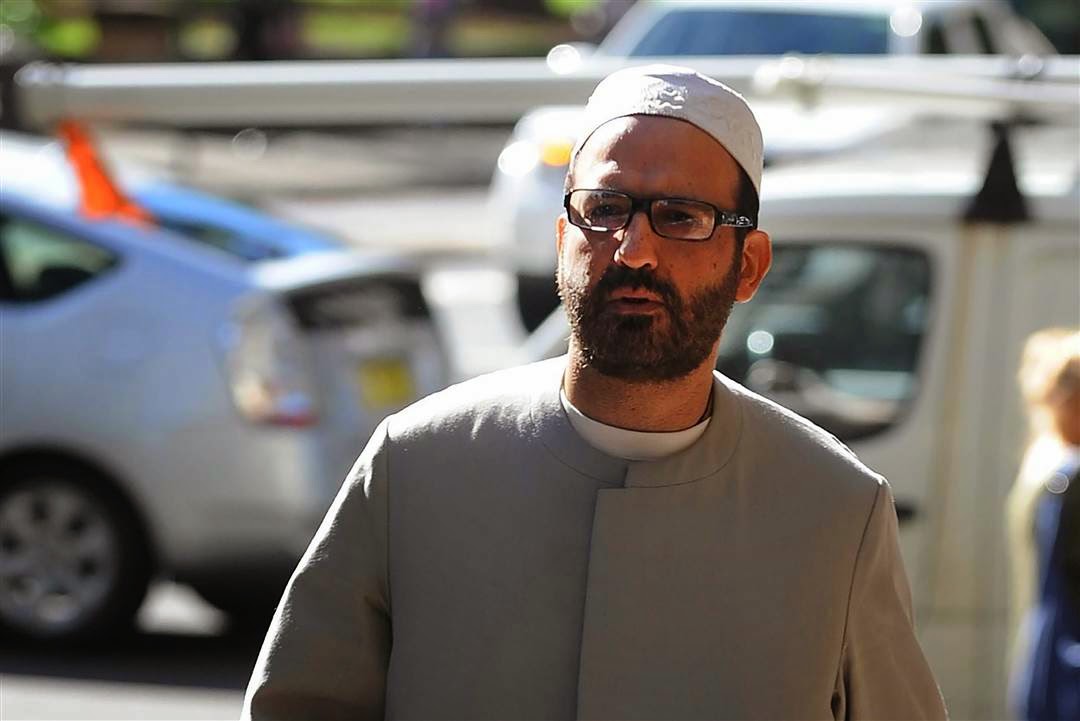 Name Change: Sheikh Haron is an Australian Muslim cleric originally from Iran. Haron was born Manteghi Bourjerdi in Iran where, as an ayatollah, his liberal interpretation of Islam led to the detention of his wife and children. Bourjerdi fled Iran to Australia in 1996 as a refugee, and changed his name to Man Haron Monis, assuming the title of Sheikh Haron.
On December 16, 2014, Haron was identified in media reports as the person who took hostages in a siege at the Lindt Chocolate Cafe in Sydney.

The chosen name of this individual includes "Haron," which means "mountain of strength."

The name "Monis" has roots in "monish," which means "to admonish," "to warn." This derives from the Latin monēre, "to warn."

Sex Offender: In April 2014, the self-proclaimed Muslim sheikh was charged with sexually assaulting a woman while posing as a "spiritual healer."
Mohammad Hassan Manteghi, also known as Sheik Haron and Man Haron Monis, appeared in Kogarah Local Court April 14, 2014, charged with one count of sexual assault and two counts of indecent assault. It is alleged he assaulted the woman at Wentworthville in the city's west in August 2002. Police say the woman, who was 27 at the time, met Manteghi after responding to an advertisement offering "spiritual consultation" in a community newspaper.

He allegedly claimed to be an expert in astrology, numerology, meditation and black magic. (Please note, "Sheik Haron" was self-styled, apparently, as an occult expert for the purpose of sexually assaulting women.)

Detective Inspector Michael Haddow says their investigations have revealed advertisements about the healing centre were placed in Fijian, Chinese, Macedonian, Indian and Spanish local newspapers between 2000 and 2002.
Police allege the first time the woman was indecently assaulted when she met Manteghi at his business on Station Street.
Detectives says when they met again about a week later Manteghi indecently and sexually assaulted the woman under the guise of a spiritual healing technique.
Manteghi allegedly told the woman not to tell anyone what happened. Source.

Murder?: On November 15, 2013, Haron was charged by NSW Police with being an accessory before and after the fact to the murder of Noleen Hayson Pal, allegedly stabbed and set alight in a Werrington apartment stairwell on April 21, 2013. His partner Amirah Droudis, was formally charged with Pal's murder. Pal was Haron's ex-wife.
On December 12, 2013, Haron and Amirah were given bail at Penrith Local Court. Magistrate Darryl Pearce said there wew significant flaws in the Crown's case against the pair. "It is a weak case'" he said. Prosecutor Brian Royce said Monis' claims the Iranian Secret Police and ASIO were trying to frame him for the murder was fanciful. Magistrate Pearce said all theories needed to be examined.
On January 22, 2014, Haron told magistrate Joan Baptie that he was representing himself and proceeded to talk about documents ASIO has on him that he wanted to see. He told the court he has been charged in connection to the murder of his ex-wife because ASIO is conspiring against him to have him jailed. But Magistrate Baptie told him she cannot order ASIO to release documents about him. Haron stood outside the Parramatta Local Court wearing chains and holding a sign claiming he has been tortured in jail. He said: "This is not a criminal case. This is a political case." Source. 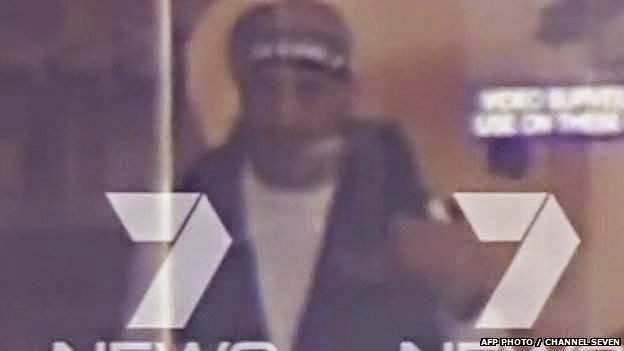 Syncs are being picked up by some. 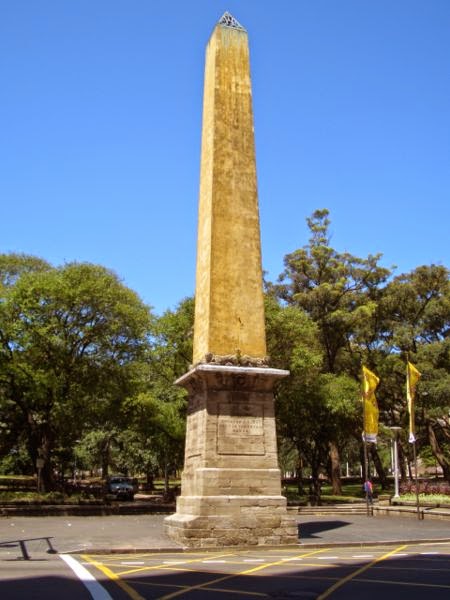 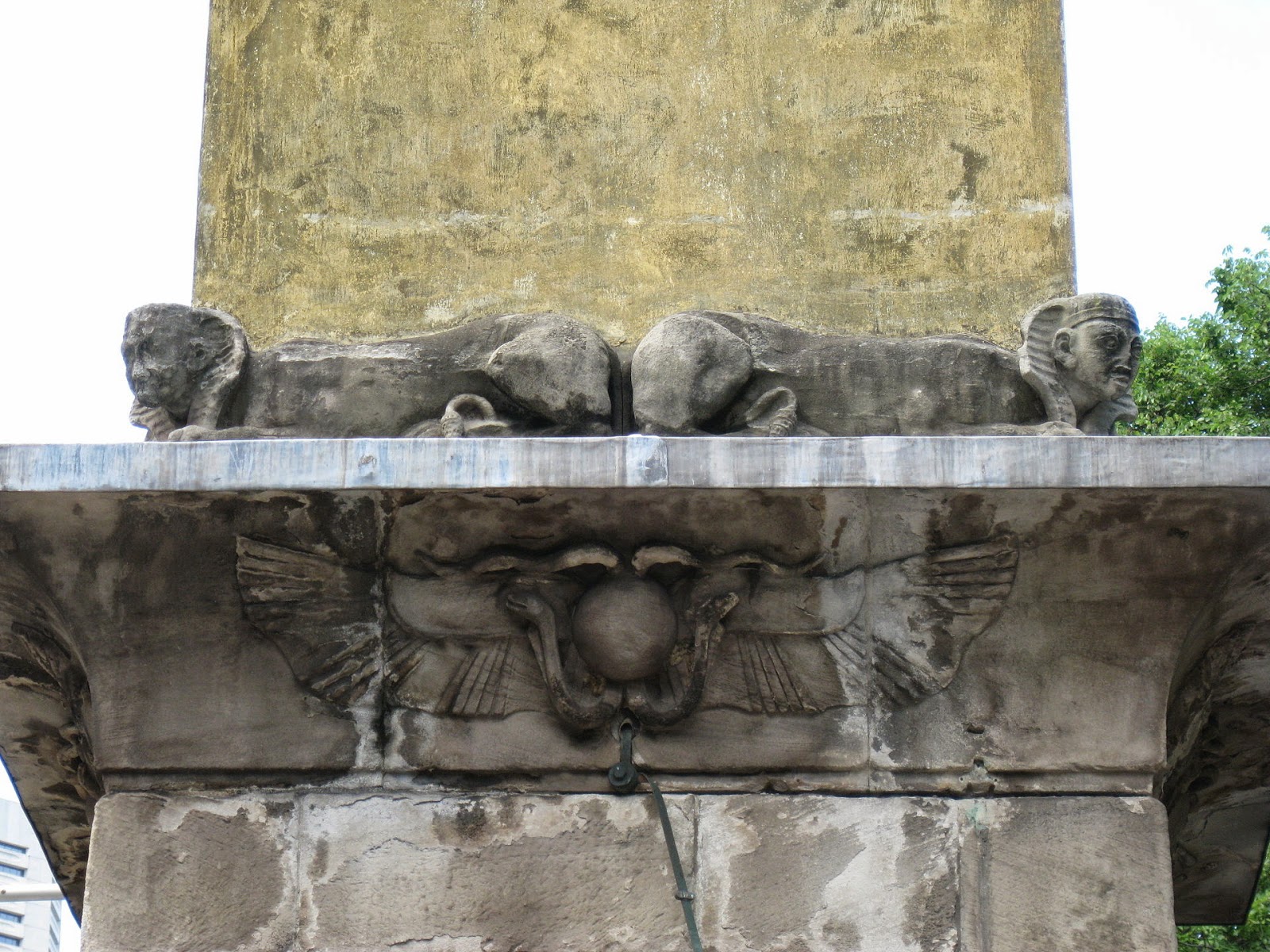 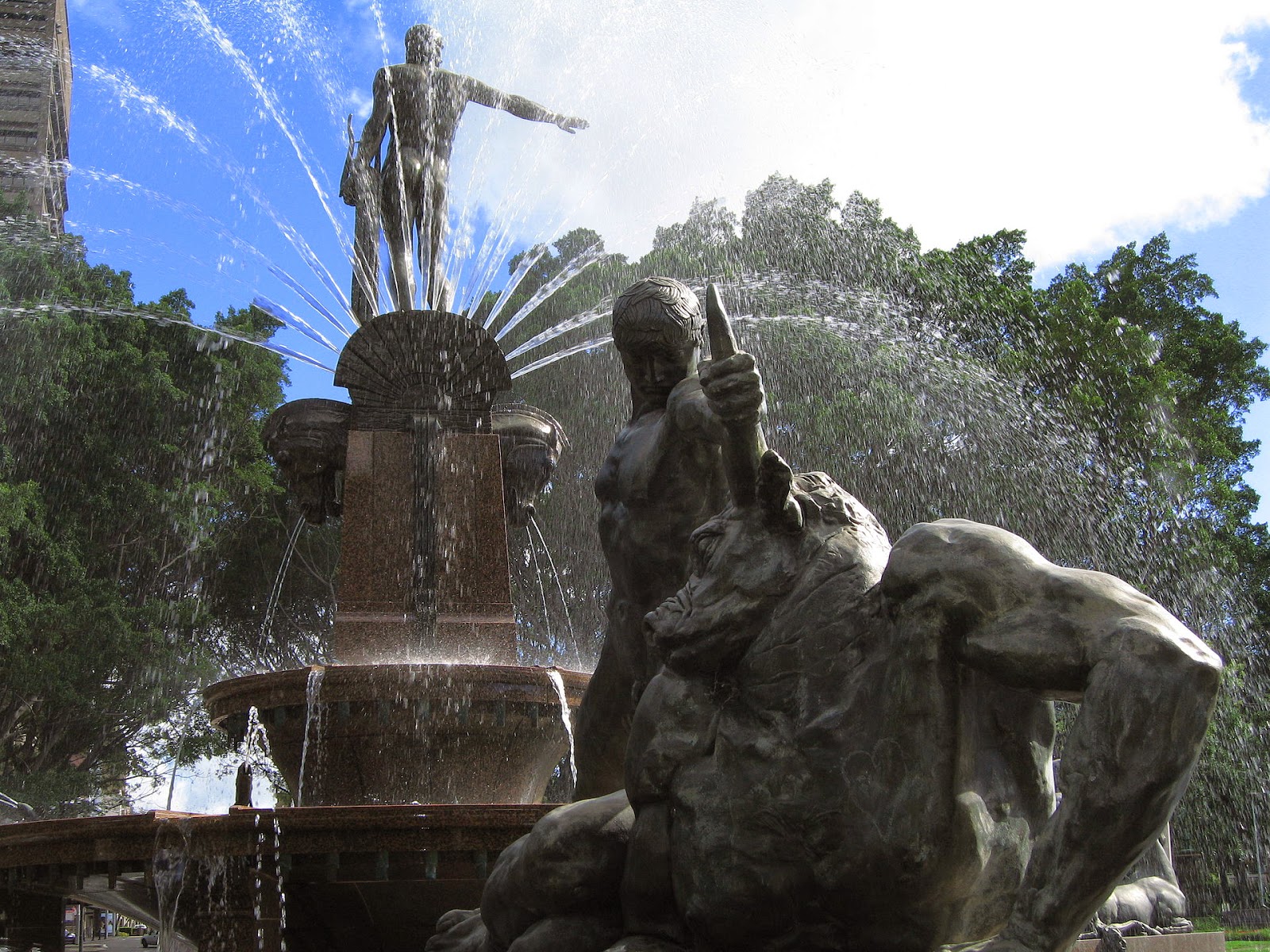 David Isnes notes: "Archibald Fountain: 200 metres away with some big Apollo themes. The geometry of Hyde park is interesting." 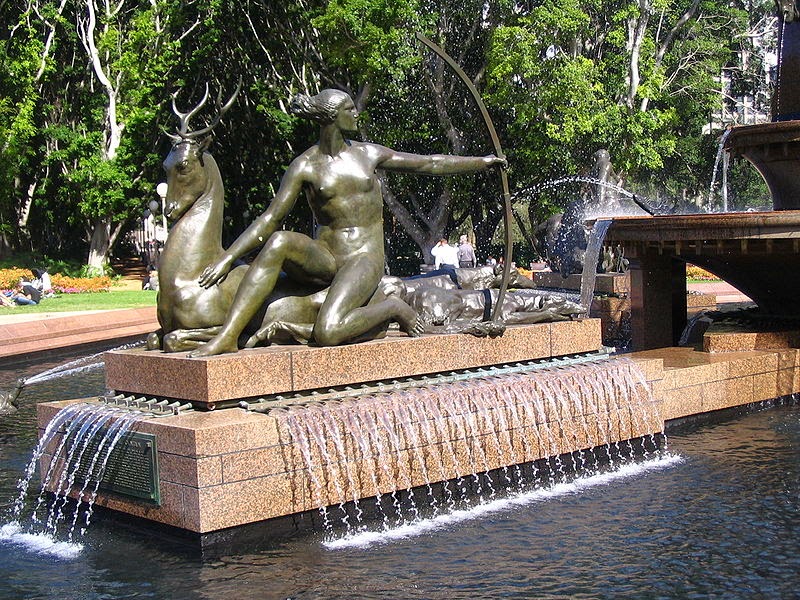 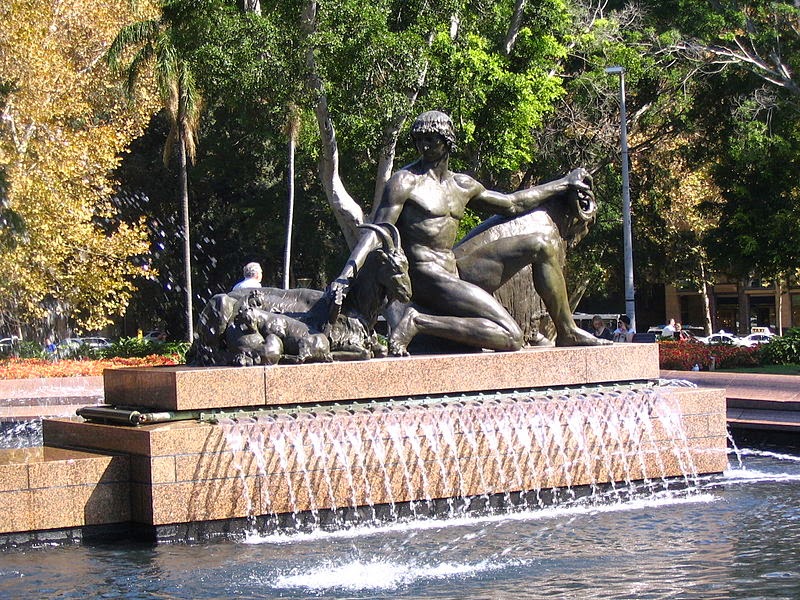 The Archibald Fountain, properly called the J. F. Archibald Memorial Fountain is located in Hyde Park, in central Sydney, New South Wales. Diana (the huntress), Aristaeus (as a shepherd with rams), and Theseus defeating the Montaur, topped with Apollo, are depicted at the Fountain. 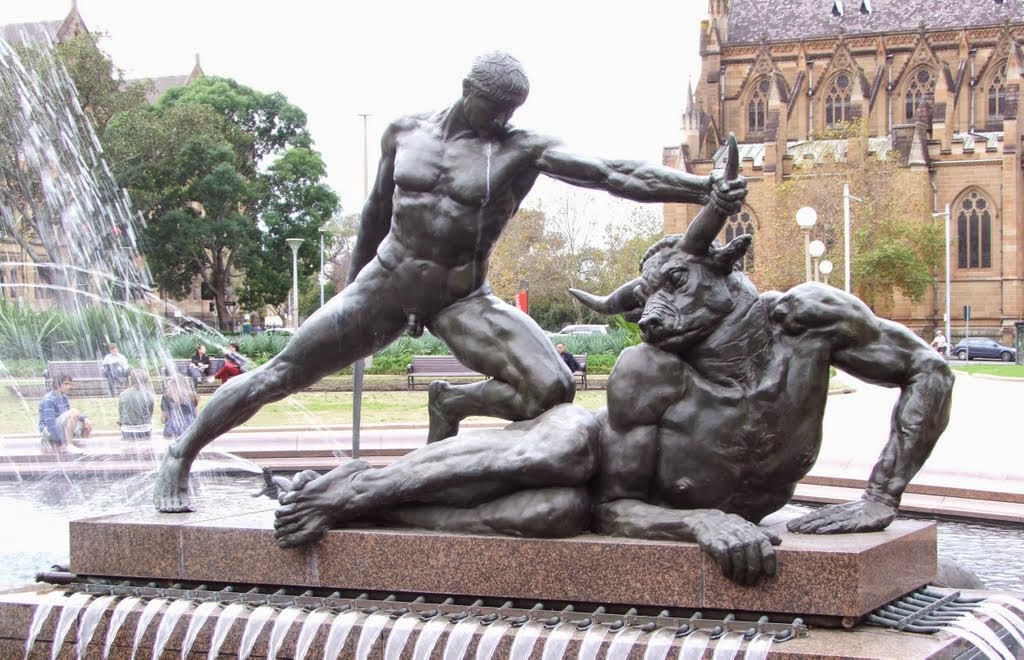 To which, Johanna Lenski replies: "Well, there we go! 33rd degree, right inside the center of the King (3rd King of KK33?) and Queen's royal theatre!"

Darren Broo wants us to remember that this happened on Philip Street, since Philip means "horse" and this is the Year of the Horse.

Meanwhile, a mass shooting in Philadelphia involving several people being killed has been unfolding in the last 24 hours. See "Suspect sought in 6 shooting deaths near Philadelphia." Bradley William Stone, 35, is being hunted.

And also, "Belgium Siege: Armed Suspects Surrender to Police; No indications of Terrorism" is worthy of your attention. 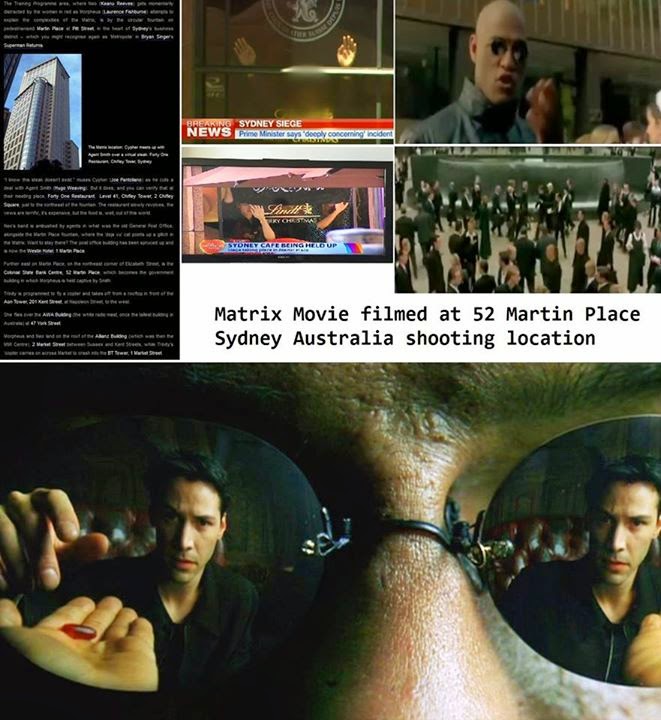 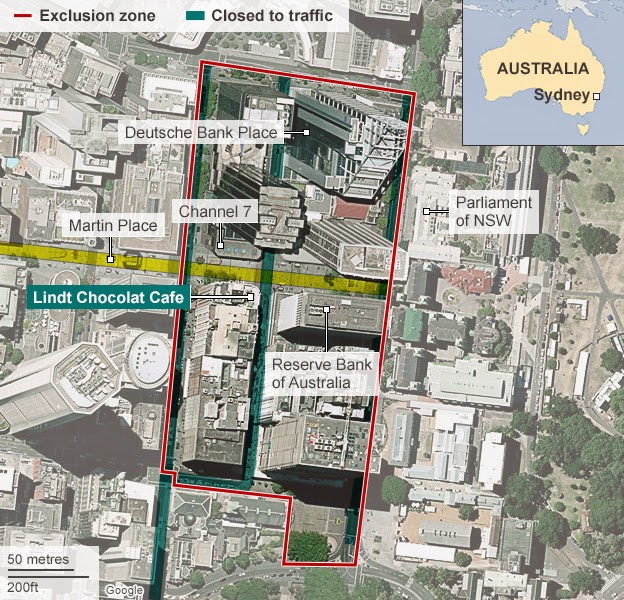 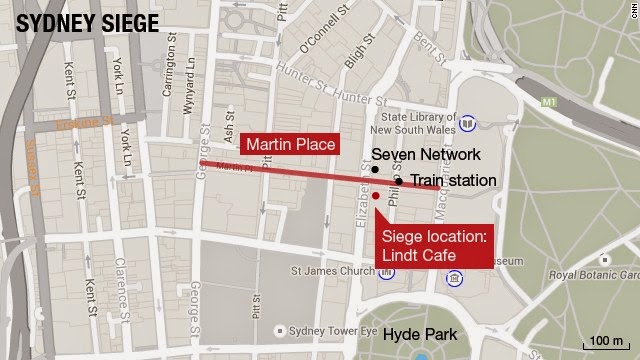 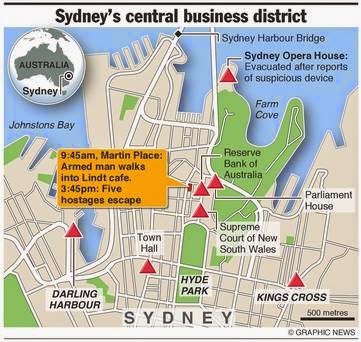 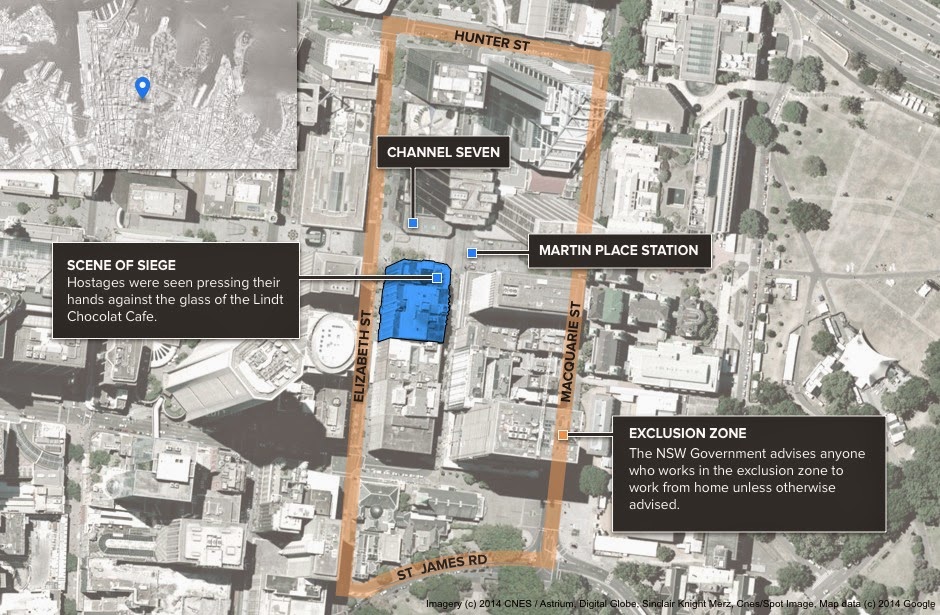 Posted by Loren Coleman at 2:13 PM

That makes at least three of these recent incidents with explicit occult connections. There was the Moorish Science Temple connection in last month's plot to bomb the Gateway Arch in St. Louis. And I remember commenting here that there'd been at least one other, though I can't come up with it now. Definitely something strange in the air.

Found it. It was Austin shooter McQuilliams use of the Hierophant Tarot card.

It was at Balmoral Beach in Sydney where the great amphitheatre was built in anticipation of "World Teacher, When He Comes." http://www.newdawnmagazine.com/articles/esoteric-australia

Not sure if anyone has picked up on the language being used/pushed through the media. Something I picked up on a little while back, and something that is possibly alluded to via the release of ubisoft's AC-Black Flag game 21/11/2013 and the newly released Unity in 11/11/2014. Also calling to mind the ISIS event and a possible imminent global False flag event calling on the world to be united, or else...

A key motif is the signalling of a call to arms via the black flag. A key word used to call to action the general public is the word, 'unity'. This unity can only be achieved via a major event, terrorising enough to instil fear in the general public. So on one hand you have a triggering of the cause of terror, on the other you have a call to unity against that terror. But if the terror event itself is a false flag event, then what is the eventual objective of this event? We are beginning to see the machinations of the media to eventually bring about an event of much greater significance. The first major step towards the conditioning towards acceptance of what the 'experts' want us to believe is happening before our eyes today.

You can view further my earlier prediction (found in the comments section only) here.

@red dirt report - interesting that you should mention about temples:
I could have sworn that I heard on the evening news from the other room tonight, that the dedication of the new (third) temple in Jerusalem happened today or yesterday, but I can't seem to find any official coverage on this. Just an ended indie-a-go-go campaign for it. If it's true, that is a HUGE deal, and incredibly significant.
https://www.indiegogo.com/projects/build-the-third-temple--3