For fans of Alan Abbadessa-Green's rather addictive frequent (usually on Thursdays) short video Sync Quick News, from Sync Book Press, the one on December 4, 2014, was, well, provocative. The Sync Quick News' "Cops Cameras and Cards" clicked on all pistols.

Mixing nicely with the content, I was struck by Green's use of a word - déjà vu - early in his news that I also found had popped up in the news I was following on the 3rd of December. It was that kind of week.

Déjà vu, from the French, literally "already seen," is the phenomenon of having the strong sensation that an event, feeling, or perception currently taking place has been experienced in the past, whether it has actually happened or not. 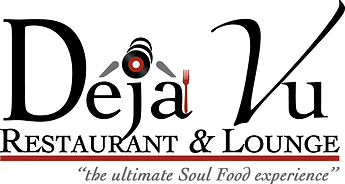 As it turns out, I was looking into a report of five people being shot outside a restaurant in Newport News Tuesday night, at about 8:20 pm, December 2nd. The telling name of the location: Déjà Vu Restaurant and Lounge, Newport News, near Norfolk, Virginia. The Déjà Vu site is attached to Wynnwood Plaza Hotel. The victims were ages 28, 32, 42, 45, and 59, and were together. One was a Navy sailor, and now the Déjà Vu is off-limits to Navy personnel.

Had I just heard some news from Newport? Or Newport News (oh ya, on November 28th)? Or Newtown? Or Newton? Was this the same story or another? And that restaurant name? Whoa. Oh, and yes, I was recently in Newport, Connecticut.

"It is in the humble opinion of this narrator that this is not just 'something that happened.' This cannot be 'one of those things'....This, please, cannot be that. And for what I would like to say, I can't. This was not just a matter of chance.…These strange things happen all the time." ~ Magnolia, 1999. 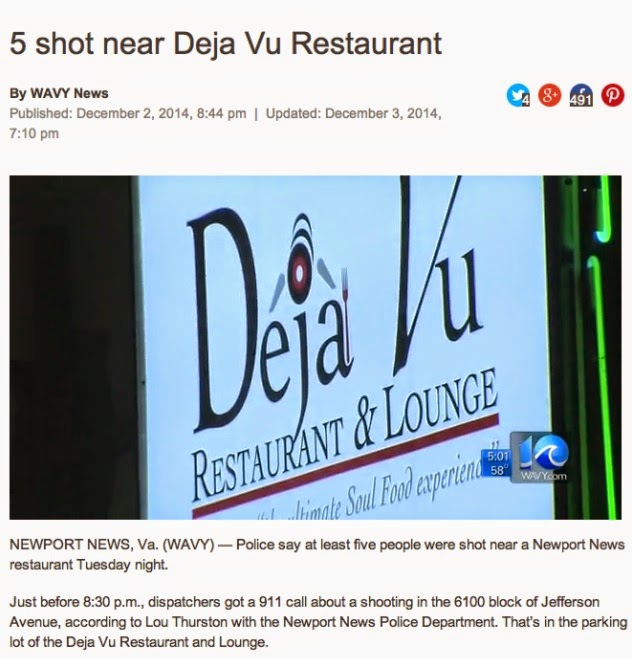 Alan Green's video news also, in and of itself, gave me a déjà vu feeling because it spent time talking about this Twilight Language's and the Mask of God's recent discussions of the Hanging Man Tarot Card.

My images were of the Hanging Man card and Heath Ledger's last character as a hanging man. 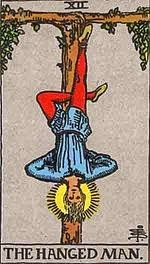 This all linked to more syncs coming my way. 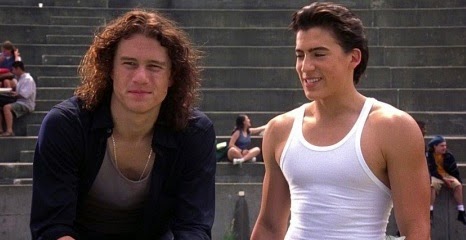 Heath Ledger and Andrew Keegan starred in 10 Things I Hate About You (1999).

This is the week when celebrities and syncs became news.

Andrew Keegan's last film role is an uncredited policeman in The Dark Knight Rises (2012), which, of course, starred Heath Ledger as the Joker.

What occurred also earlier in the week is that I randomly stumbled across a repeat broadcast of a Tosh.0 episode about "furries" (people who dress up as furred animals for fun, frolic, and sometimes sexual encounters). It gave me a deep déjà vu feeling watching Tosh's creepy scenario. But not because I had seen this Tosh.0 episode before, for I had not.

Originally broadcast on September 3, 2013, this specific one was noted as being from Season 5, Episode 5. You can see the video entitled "Furries-Kid," here. 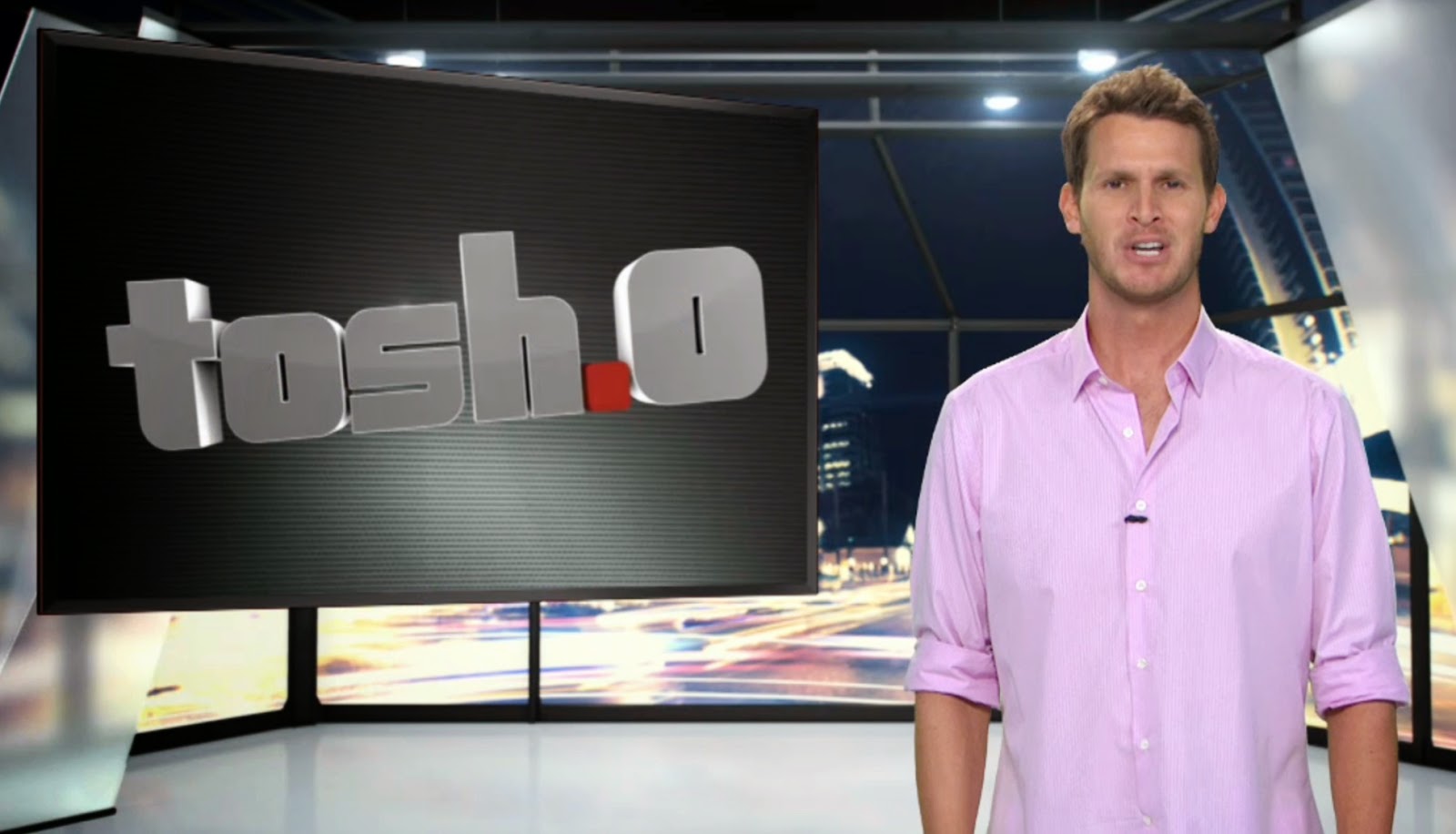 In one of his "web redemptions," Tosh decides to stage a "celebrity" furries party. The associated identities assigned to various characters in the sketch are, well, coincidentally bizarre and déjà vu. 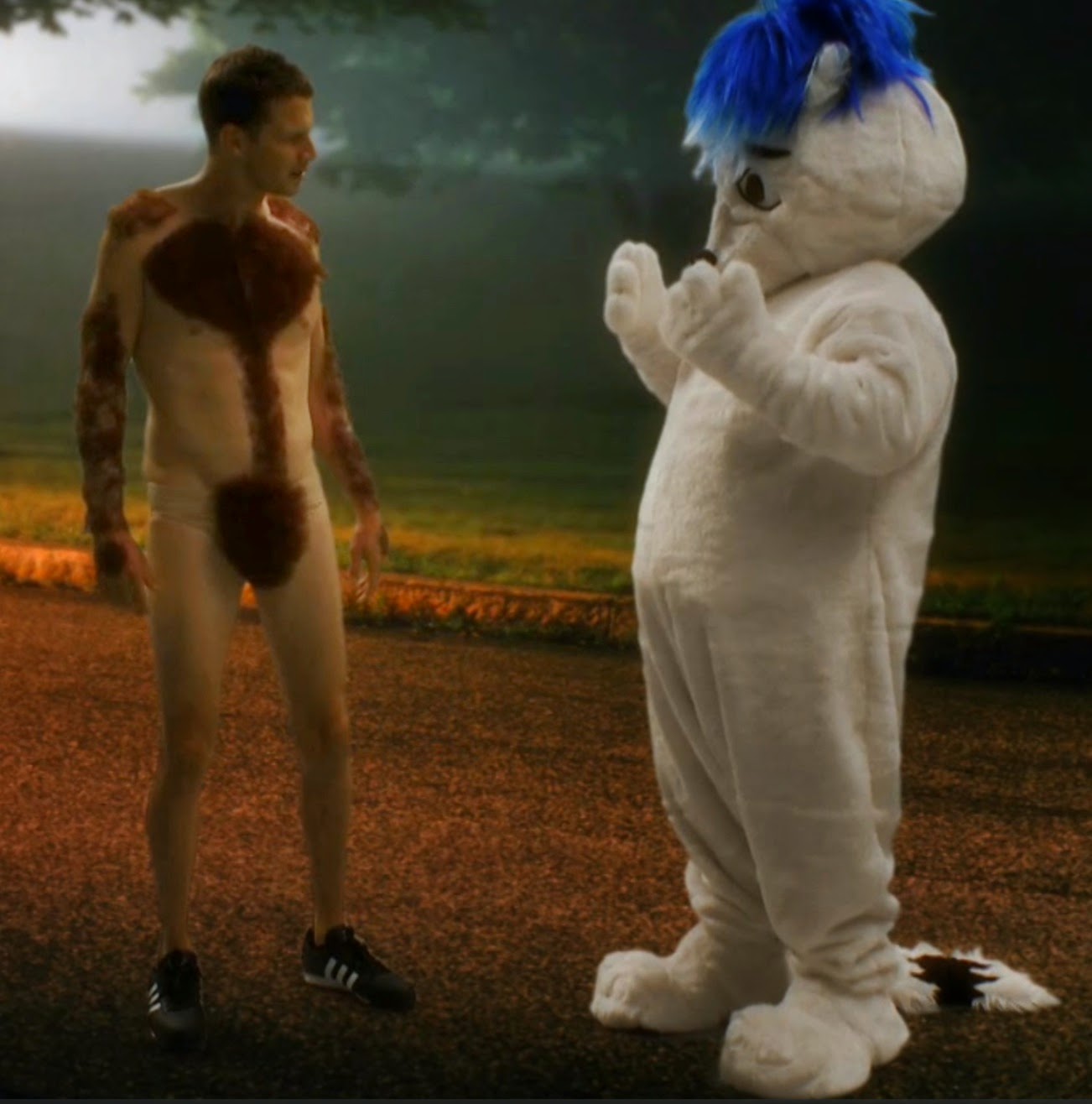 Tosh, on the left above, with skin-colored tights on, and elaborate fake body fur, says he is "Robin Williams." 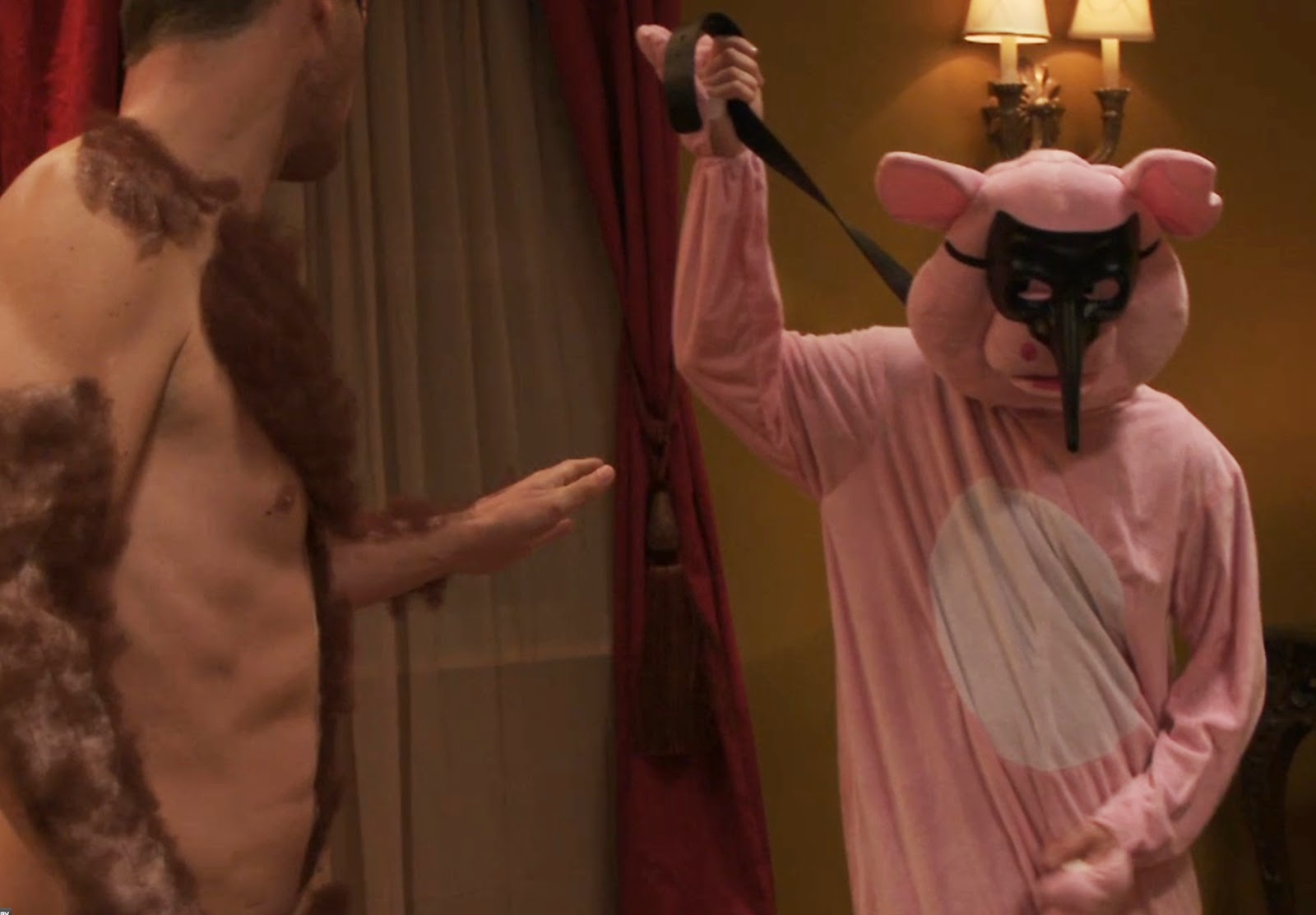 At the "party," which is sort of a furrie déjà vu version of Stanley Kubrick's Eyes Wide Shut, the "Williams" character goes around identifying the costumed "celebrities."

This was prophetic, in a way, as far as these two characters exchanging behaviors.

[Little did I know how "prophetic." See "Eyes Wide Furry."]

Back to what took place after Tosh's fiction was produced, in an act of parasuicide, the real Philip Seymour Hoffman, 46, died February 2, 2014 (Groundhog Day), with a syringe in his arm. Hoffman's death was caused by "acute mixed drug intoxication, including heroin, cocaine, benzodiazepines and amphetamine," according to the New York City's Medical Examiner's office.

This all seemed a bit of déjà vu, for Hoffman's friend, Heath Ledger's autopsy result of February 6, 2008, from the same medical examiner's office said Ledger had died "as the result of acute intoxication by the combined effects of oxycodone, hydrocodone, diazepam, temazepam, alprazolam and doxylamine." Heath Ledger was 28, when he died January 22, 2008.

By the way, the film Groundhog Day (1993) is the ultimate cinematic treatment of déjà vu, when the same day repeats over and over again.

A few months after Hoffman's death, on August 11, 2014, the real Robin McLaurin Williams, 63, died in his Paradise Cay, California, home. The Marin County Sheriff's Office deputy coroner stated Williams had hanged himself with a belt and died from asphyxiation.

Williams hanged himself (in the real world). Not Heath Ledger nor Philip Seymour Hoffman (who both, through film and in Tosh's fiction, did hang). The fiction foreshadowed the reality, however, among friends, in a strange twist of programming. 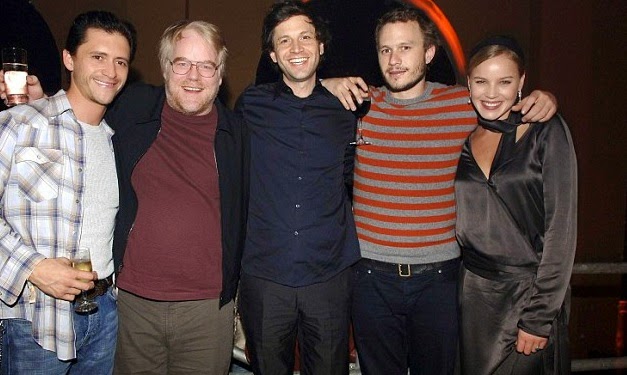 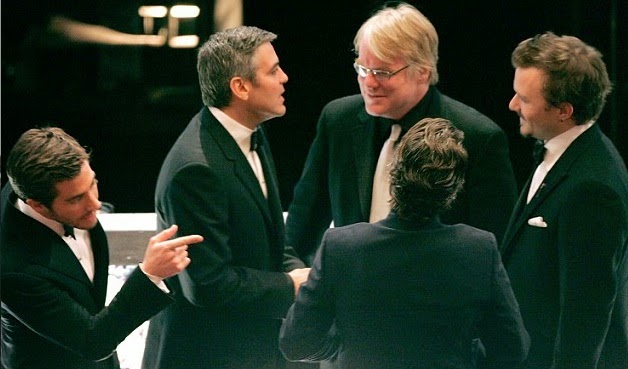 Heath Ledger (far right) next to Philip Seymour Hoffman, at the 2006 Oscars with George Clooney, Joaquin Phoenix and Jake Gyllenhaal. 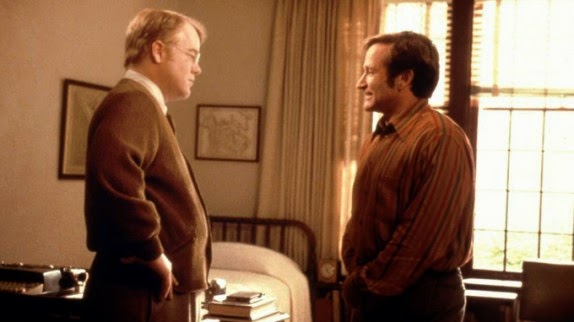 Above and below: Philip Seymour Hoffman and Robin Williams in Patch Adams (1998). 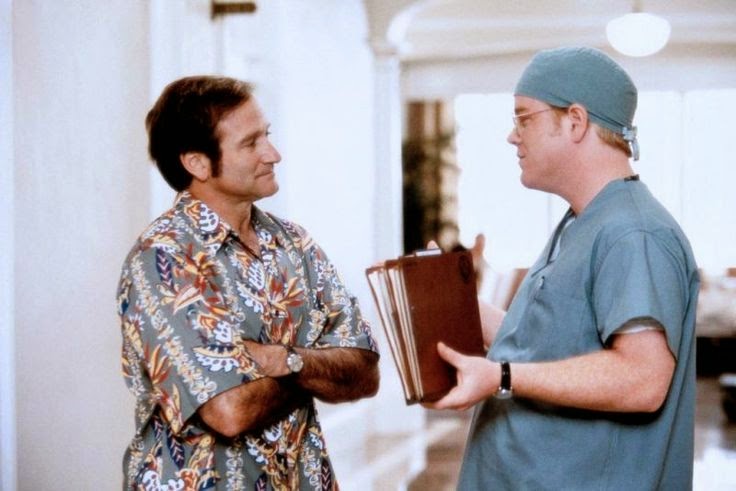 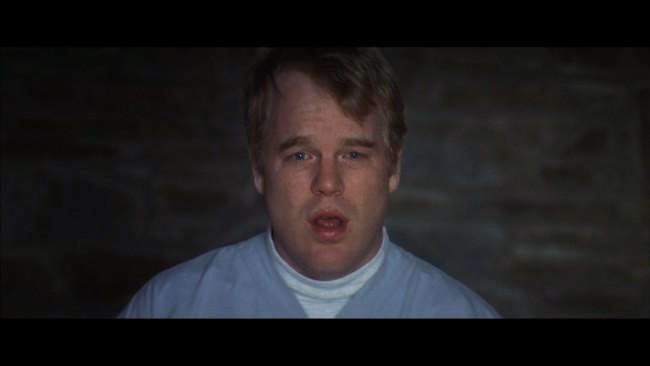 On December 1st, just by "coincidence," I found myself watching Magnolia again. And there was Philip Seymour Hoffman again.

Phil Parma [Philip Seymour Hoffman]: "Why are frogs falling from the sky?" ~ Magnolia, 1999.

Great post, Loren. Touched upon a lot of important sync subjects, and mentioned you and your work several times - even some crypto subject matter. We also touched upon the Andrew Keegan/Full Circle spiritual sync group in Venice Beach. That town syncs with gun violence in relation to "Joe Cole" who was a roadie for Henry Rollins and was shot and killed 23 years ago this month in Venice. I know you have had some Venice syncs in recent months ...