The slaughter of the innocents continues, even if merely in purely domestic situations. 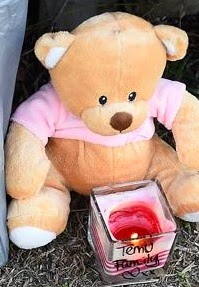 A teddy bear was seen against a fence across the road from the Cairns child massacre, apparently left for the "Temu Family." 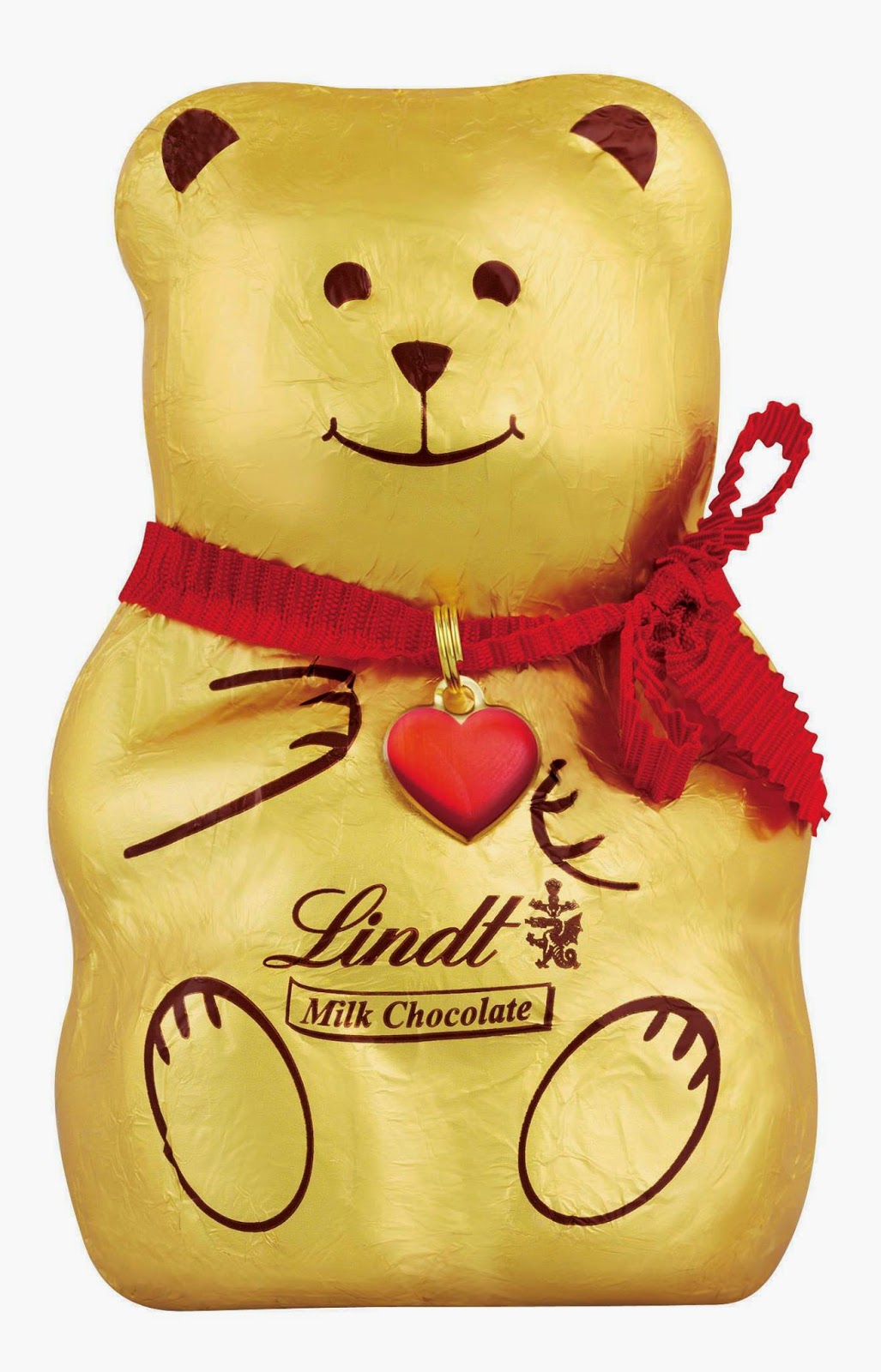 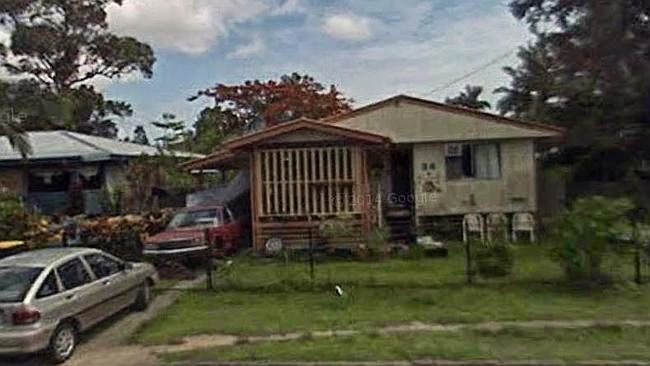 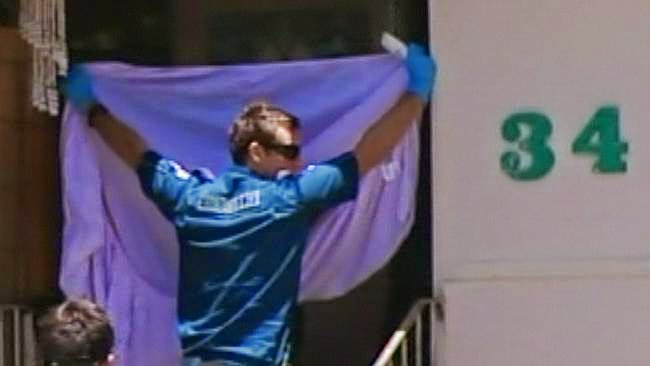 On December 19, 2014 emergency crews were called to a home at 34 Murray Street in the Cairns suburb of Manoora, Queensland, at about 11:20 a.m. local time where eight children were found dead. The victims were aged between 18 months and 15 years. Lisa Thaiday, who said she was the children's mother's cousin, said another sibling, a 20-year-old man, came home and found his brothers and sisters dead inside the house. The 34-year-old mother of seven of the children was also reportedly injured and taken to hospital.

Murray Street: The name Murray is Celtic and the meaning is "lives by the sea." In some interpretations, it is regarded as "from the sea" and/or "Lord of the Sea" (a/k/a Poseidon.) 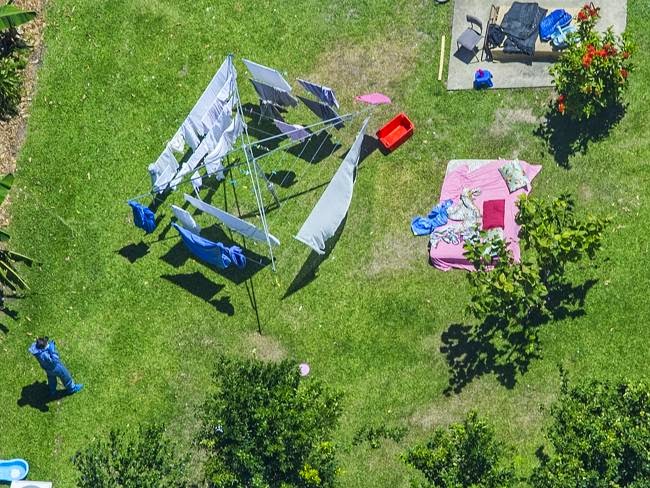 The backyard of the home where eight children were found stabbed to death. Note the cross formed by the clothes lines.

The tragedy follows the Martin Place/Lindt siege which traumatized Australians this week. Queensland Premier Campbell Newman said, “These are trying days for our country.” 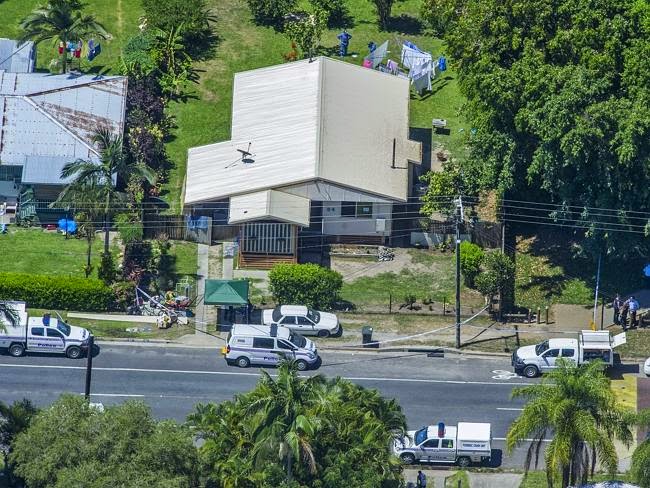 The home where eight children were killed in Murray St, Manoora, Cairns, Australia.

“This neighbourhood is going to be a different place,” said 20-year-old Ngatu Temu, who knew the family well. 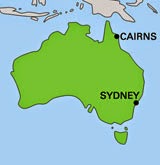 Rather sad and mysterious, but intriguing that this occurred during Hanukkah (sunset, December 16 to nightfall, December 24, 2014) in a town, Manoora, which phonetically sounds like menorah. There is absolutely no indication that this family is Jewish, of course.

Claims of "virulent anti-semitism" indicates a shortsighted reading of synchromystic and twilight language analayses.
The family names Temu and Thaiday appear to be indigenous in origin, from Pacific Islands, via Cook Island, through New Zealand, and ending up in Australia.

Night flight emails me this: "In addition to the name Manoora sounding like menorah, there were also eight children murdered and eight candles on the menorah. Strange coincidence."

These are all merely coincidences, but strange things do happen.

"It is in the humble opinion of this narrator that this is not just 'something that happened.' This cannot be 'one of those things'...This, please, cannot be that. And for what I would like to say, I can't. This was not just a matter of chance.…These strange things happen all the time." ~ Magnolia 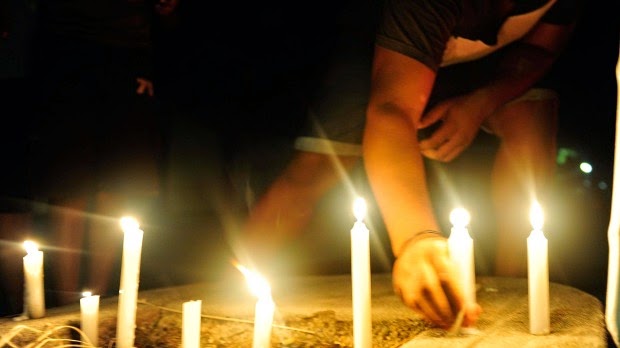 (One candle for each child?) A candlelight vigil is held in the street where eight children died in a multiple stabbing in the suburb of Manoora. Photo: Ian Hitchcock. Source.

This northern Manoora is in Queensland, and appears to have been named after another Manoora in South Australia. The first Europeans to settle at the southernmost Manoora, in about 1841, were the sheep pastoralists Edward and William Peter, of Scottish origin. Peter (the "rock") is a name tied to early Christianity, needless to say. 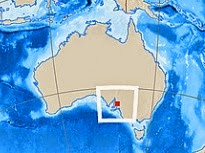 The location of the first Manoora in Australia.

If this turns out to be a case of the mother stabbing her own children, it fits into a pattern in Australia of a high number of cases of mothers killing their own children. The infanticide is often carried out by taking the kids out into the desert in a van, and the killing (murder-suicide) of the mother and her children by carbon monoxide poisoning.

Update: The mother of seven of the children, 34-year old Mersane Warria, , also known as Raina Thaiday, now has been arrested over the murder. The eighth victim is believed to be Warria’s niece.

Neighbors reported Warria was seen pulling all of her belongings out the front door, screaming she was starting a "new life."

This is a domestic mental health issue. Neighbors reported they saw Warria pulling her belongings out the front door, exclaiming that she wanted to start a new life.
Posted by Loren Coleman at 9:02 AM

As I have been noting in recent weeks and months, Australia has played a big sync role that has yet to be fully realized. Just yesterday, I posted the following Oz-synced Dust Devil Dream: http://www.reddirtreport.com/dust-devil-dreams/baby-its-cold-outside

That said, the word "Cairns" came to me at about 4 p.m. CST. Quite out of the blue. Hadn't heard it mentioned on the radio - nothing. I knew it was a city in NE Australia and not much beyond that. I said the name "Cairns" several times to myself. It was eerie. I wasn't sure why. After reading about this horrifying massacre, now I know.

I think the simplest and most significant (in Christian culture) resonance with Murray is simply Mary, i.e. the mother of God, whose feast of the immaculate conception took place on December 8th.
This "sacrifice" of 8 children on Hanukkah also resonantly follows the hostage-situation involving extremist Islam and the theocratic dictatorship ISIS. Isis is regarded as a resonant with Mary, since she Isis was the mother of Horus, and Mary is the mother of Jesus. Furthermore, Hanukkah commemorates the hostile takeover of Judea by Judaic religious fanatics, i.e. the Maccabees, who destroyed "apostate" Hellenized Jews, much as Isis now targets "heretical" Shiites and the like.

In the case of child murder by a parent, I would have said it was more likely to be by the (usually estranged) father taking them from the mother's custody first, or during a court-allowed visitation, at least here in Australia. Here is another recently concluded case:
http://www.theage.com.au/victoria/charles-mihayo-jailed-for-life-with-nonparole-of-31-years-for-killing-his-two-young-daughters-20141218-129pd5.html

Please see the update. The mother has been arrested, and my speculation about the mother allegedly being the source of the children's murders was apparently correct.

Murray links to Andy MMurray, tennis player, who was at the Dunblane School Massacre