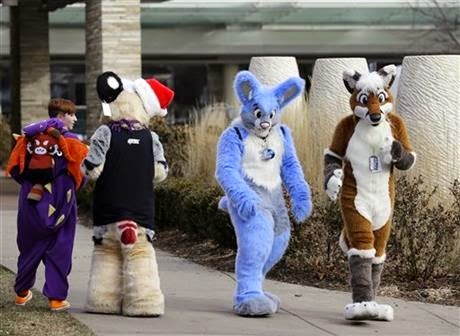 Does opening oneself to synchromysticism result in predicting future "coincidences" and "syncs"?

In that examination of syncs tied to Heath Ledger, Philip Seymour Hoffman, and Robin Williams, I detailed my discovery last week of a weird clip from Tosh.0's episode on furry characters. Two furry costumed "celebrities" were identified as "Robin Williams" and "Philip Seymour Hoffman." Bizarrely, the "Hoffman" character was shown hanging himself. (Autoeroticism aside, the gesture was suicidal, as well.)

In my posting yesterday (December 6, 2014), I said that Tosh.0's scenario took place at a party, "which is sort of a furrie déjà vu version of Stanley Kubrick's Eyes Wide Shut."

I found an old blog article that agreed with me today. Writing September 5, 2013, at the Furry News Network, Markos Sinister observed in "Kusa the Arctic Fox gets Web Redemption on Comedy Central’s Tosh.0":

The clip ends with Daniel taking Cody to a “Furry Party” spoofing Stanley Kubrick’s Eyes Wide Shut, where he and Cody encounter celebrities having sex in mascot costumes. 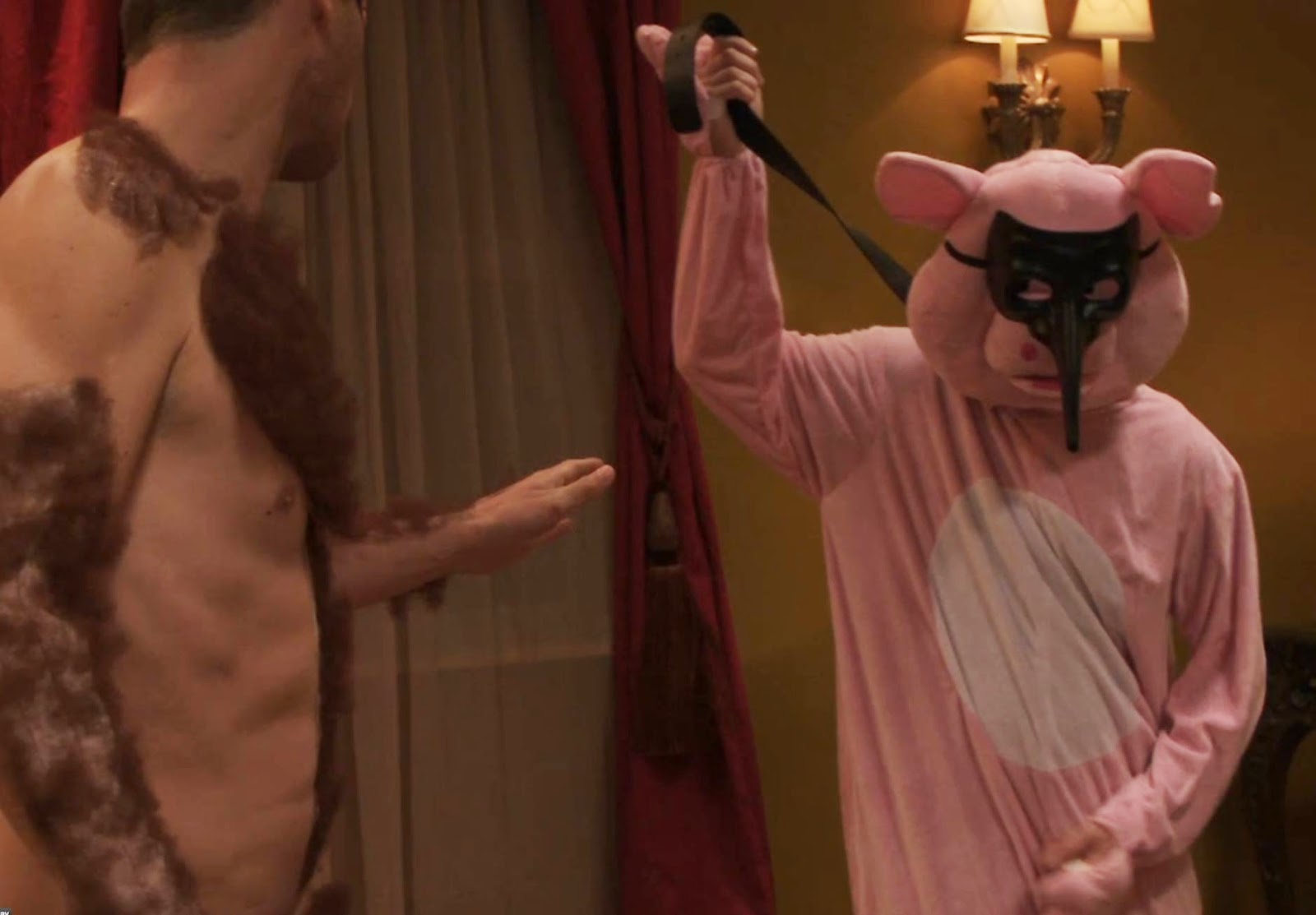 I have no idea why I thought it was important to post this at that time. I was going to be on Coast to Coast AM at 1:00 Eastern Standard Time, talking about different news. I did want to get this "furry" item out of my head - I'd been "writing" it in my mind since mid-week - and wished to move on.

At a Facebook group, KitchenSync/SyncBookPress/The Conscious Collective, I shared the link later on the 7th.  One member, Jason Barrera, wrote, perhaps somewhat truthfully but definitely humorously, a comment, "Look what you did, Loren."

Barrera added a link to news from the Chicago area, "Chemical leak at Hyatt Regency during furry festival deemed intentional."

I was startled by what I read. I was in the midst of an overlapping sync. 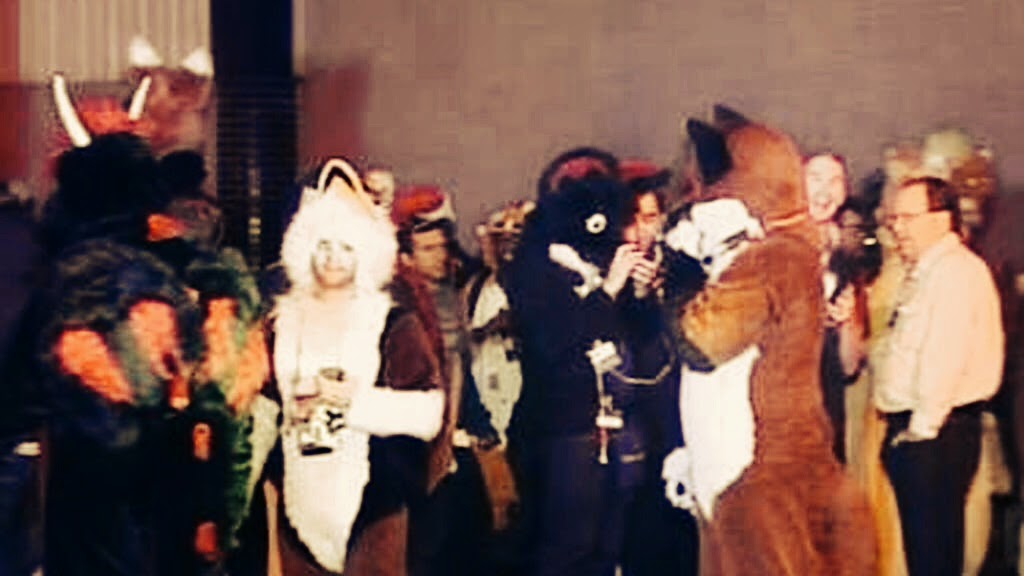 Furry conference goers mill about outside the Hyatt.

"Nineteen people were hospitalized early Sunday after an intentional chlorine leak at the Hyatt Regency O’Hare during the 2014 Midwest FurFest," noted the Chicago Sun-Times. 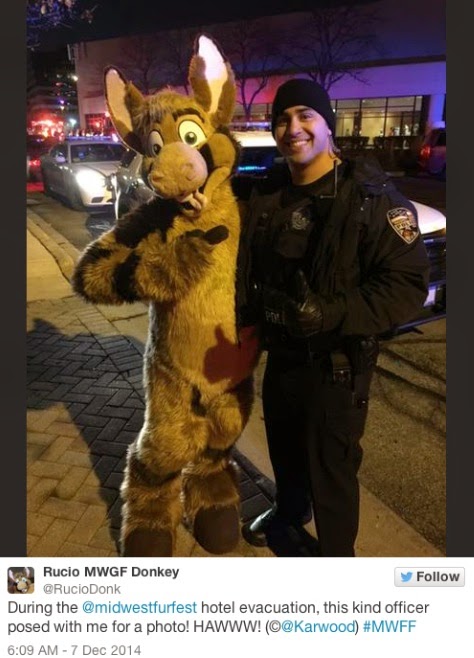 The Chicago Tribune recorded the time: "The incident happened around 12:40 a.m. at the Hyatt, at 9300 West Bryn Mawr Avenue in Rosemont, according to a statement from the Rosemont Public Safety Department. First responders were called to investigate a noxious odor that was spreading across the ninth floor of the hotel, where a high level of chlorine gas was discovered in the air."

Okay, this incident began at 12:40 a.m., which would have been Central Standard Time in Chicago. Almost exactly the "same time," 12:33 a.m., but Eastern Standard Time, and thus technically an hour earlier, I posted my "furry" notes. (You will see that I misspelled it "furrie," because I had never written about the subject before!) 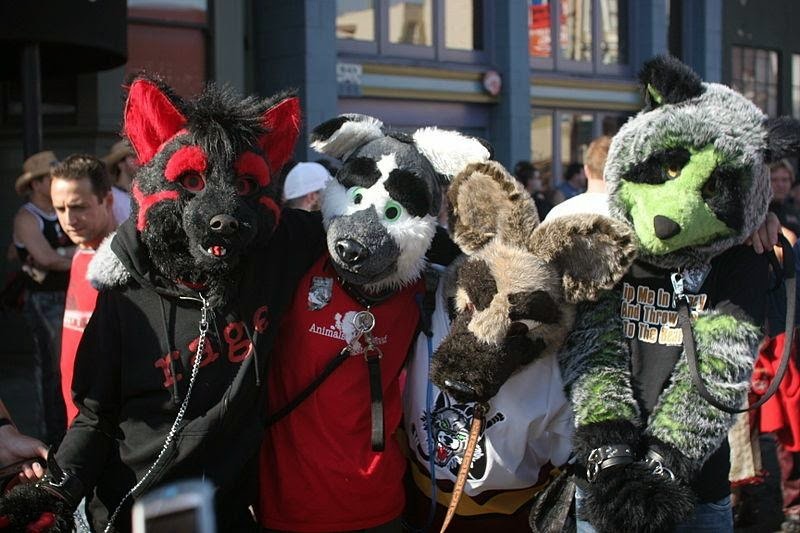 The intentional gassing at the furry convention is a sync that is beyond amazing, personally.

It happened in Rosemont, Illinois, a tiny city of 4000 people.  Rosemont derives from the mount (hill, incline, mountain) of roses (traditionally red flowers). I've visited Rosemont, because that's where my brother Jerry use to live.

Being neither paranoid nor psychic, I do remain, very curious about this process.  Do predictable moments occur on a level not yet understood? There are no coincidences, right? What is this then, when this happens?


Chlorine, atomic number 17. Very esoterically appropriate & the "least random number." John Lennon is murdered two 17 year cycles ago, tomorrow, the 8th. 17 years & 17 days after the assassination of JFK. Ah, 34 years ago, & Robin Williams was Popeye, who is "34 years old." Nicole Kidman stars in Fur after Eyes Wide Shut, as photographer of the damned Diane Arbus, making love to freakishly hairy Robert Downey Jr., & Kubrick's Grady twin girls are not only straight from the Arbus photo, but Arbus kills herself in a bathtub on Kubrick's 43rd birthday, July 26, 1971. The naked old lady lifting herself out the bathtub in Room 237 has the haunting eyes of Diane. 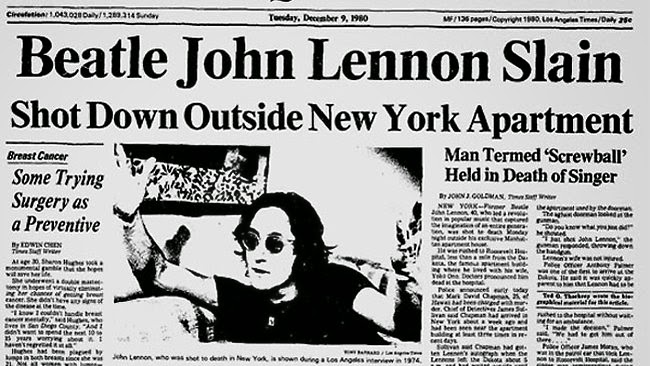 December 8th is the anniversary of the death of my father, at 64 in 1985, in Illinois. John Lennon's music would play all day on the radio, throughout 12.8, as a reminder of his death, for years. December 8th, of course, is the anniversary of the death Lennon, at 40, in 1980. By "coincidence," Paul McCarthy's vocals were recorded for "When I'm Sixty-Four" on December 8, 1966. The recording was one of the first sessions for Sgt. Pepper's Lonely Hearts Club Band. It is a song McCarthy wrote when he was 16.

My father seemed to wait until Pearl Harbor Day came around again to die, in Decatur, Illinois. He served in the U.S. Navy during World War II, in the Pacific theater.

Lennon was killed by Mark David Chapman, outside the Dakota, infamous as the site of where Rosemary's Baby was filmed. 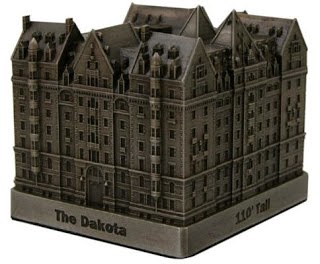 The replica of the Dakota.

My experience has always been that synchronicities occur when normal channels of communication break down -- for example, at conventions or festivals, where you're likely to run into just the people you're looking for or encounter someone who has just the piece of information you need. But at historical moments like the present, when events become particularly chaotic, there seems to be a heightened synchronisticity in general.

Come to think of it, I was dreaming last night that I was at an SF con and putting on a costume -- something I haven't dreamed about in years or actually done in decades. Nothing furry involved, but it does seem like an odd minor coincidence.

A weird sort of sync again, your post reminded me of this recent news story about the London Hyatt Regency, which occurred on Nov. 22nd!

I've had John Michell's Confessions of a Radical Traditionalist sitting out as bathroom reading, and this morning I encountered a passage that seems particularly relevant:

"I once kept a Coincidence Diary, noting down all the things of that kind which happened day to day; and I found, as others had done before, that the more I noticed them the more frequently they occurred. If I thought about someone he would immediately call or write; words I had previously never heard of repeated themselves in twos or threes; the clues in my crossword began giving personal messages; long-lost obvjects reappeared in places where they should always have been; and if I wanted a reference to any subject, I had only to pick up a book lying on someone's table, and there it was. Life became so nervously intense that I grew tired of it, gave up the diary and sank back into normality."

He goes on to suggest, "I think that during that period I was in a state of Primordial Perception, the state in which our primitive but highly sensitised nomadic ancestors lived. ... That is not a state in which one can comfortably live today. It clashes painfully with the modern way of perception."

I'm not sure I agree with Michell's conclusion. It strikes me that the very complexity and information overload of modern life might call for some internal mechanism to highlight the important stuff in a yellow market of the mind. But he's almost certainly correct that the more you look for synchronicities, the more of them you find.

Loren you are about to become a synchromystic. The more you look for them the more they manifest. The intuitive nature of your investigations will synch forth. You will become even more aware. Gnostic/hermetic adventures will come your way. Synchromysticism is necessary for us to understand ourselves in the future tense. Shineforth brave souls! Dennis/87

The horse that horeseman 'Death' rides is described as 'pale' , a translation of Greek 'chloros'.