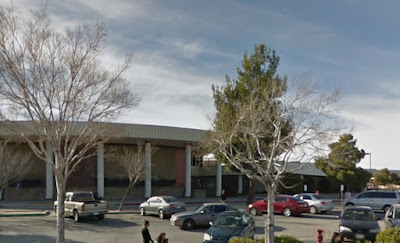 Authorities on Friday, May 11, 2018, were responding to reports of a possible shooting at Highland High School in Palmdale, California (shown above), and another one at a Manzanita school, as well. The location is the Antelope Valley.

According to a law enforcement source, multiple callers said there was a man with a gun at the school shortly after 7 a.m. Deputies and California Highway Patrol officers were establishing a perimeter in the area. A man with a rifle is reported to be shooting there.

Firefighter-paramedics were staging in response to the reports, but no one had been transported from the school as of 7:30 a.m., according to the Los Angeles County Fire Department.

At least three nearby schools -- David G. Millen Intermediate, Cottonwood Elementary and Ocotillo Elementary -- were on lockdown, employees there said.

Some media confusion appears to be in play.

One person is in custody after deputies responded to a Palmdale high school Friday morning following a report of a man with a gun on campus. One person was wounded.

Palmdale is a frequent cultural reference location associated with aliens:

Mac and Me (1988): Palmdale was mentioned in the film as a nearby city to the location of the alien, Mac's, landed spacecraft. They search this area of open desert for the alien's other family members.
The Outer Limits (1963-65): The episode "The Premonition" takes place at Palmville Air Force Base, with Palmville being a fictional counterpart to Palmdale.
The Greatest American Hero (1981–1983): Most of Ralph Hinkley, Bill Maxwell, and Pam Davidson's encounters with the aliens, or "little green guys", take place in Palmdale, with the exception of the episode "Don't Mess Around with Jim".
Terminator: The Sarah Connor Chronicles (Season 2, episode 4, 2008): Cameron's human counterpart Alison will be born in Palmdale. In the present, Cameron phones Alison's future mother, who already lives in Palmdale, during a period of memory loss or forgotness. Source.

Quite apart from Palmdale, what stuck out for me was Highland High. That's the school that Beavis and Butthead attended.